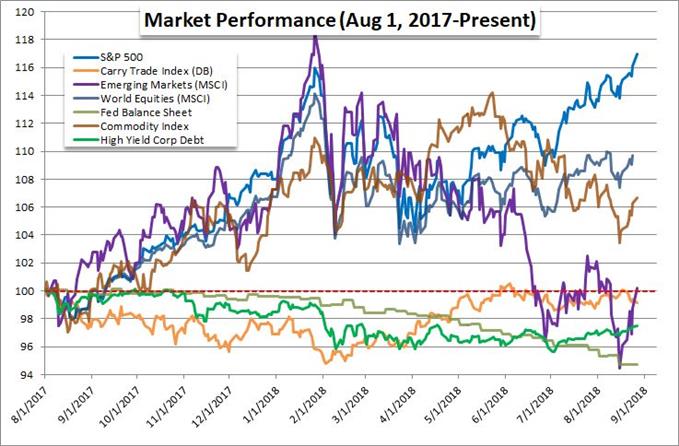 So Many Overt Technical Signals for a Dollar Breakdown, And Yet...

US Equities Fail to Inspire a Global Phenomena

This week opened to a remarkable performance from US equities. The S&P 500 and Nasdaq gapped higher on the weeks open and cleared out their respective record highs in the effort. From a purely technical basis, that is a remarkable signal of strength and typically goes a long way to jump starting a measure of follow through - even if it is purely speculative in nature. Yet, that groundswell didn't seem to take for US equities - much less for the other trailing assets that are frequently included in the overview of 'risk trends'. This past session, the major US indices offered another jump on the open, but all forward progress was immediately halted from there. The mere recognition of record highs didn't seem to earn the self-contained momentum that technical traders often exploit. Perhaps if we were not in a liquidity void, the situation could have turned out differently. If the S&P 500 and crew couldn't secure their own way higher, they certainly wouldn't inspire other risk benchmarks with less impressive pictures to overcome their speculative restraints. Emerging market assets, global indices and Yen crosses all continued to show the conflict that has burdened conviction these past few weeks. This also goes to raise skepticism over the attribution of inspiration to the trade progress that was made between the US and Mexico Monday. Though, if the threat of all out trade wars does start to ebb, it is worth remember there are numerous other risks that lurked in the backdrop before the Trump administration applied its first metals tariffs on global trade partners.

Dollar's Slide Takes Out Another Barrier but Conviction is Uneven

From the charts, the Dollar earned further technical pain Tuesday which in turn translated into some rather provocative pattern developments. The trade-weighted DXY is arguably one of the most remarkable pictures for the Greenback with a slide that furthers a bearish progression that had already cleared a three-week head-and-shoulders pattern 'neckline' and 50-day simple moving average, and has further cleared a multi-month rising trendline support. The stacked technical achievements from this benchmark seem a strong foundation to support conviction on a sustained retreat from the currency, but there is good reason to remain skeptical of the market's intent. While I am bearish on the Greenback through the medium-term, the key fundamental burdens the currency faces over the months ahead are not readily on display now. The data this past session for example was of mixed value. On the one hand, the consumer confidence survey from the Conference Board hit a near-18 year high (suggesting political risks were not dampening sentiment) while the trade deficit ballooned to $72.2 billion amid trade wars. If I were looking for momentum to build behind Dollar selling, I would expect it to come through the collective blow back from trade wars, a global retreat in monetary policy normalization or general risk aversion. Nevertheless, I try to remain open to the unexpected. For Dollar pairs already on the 'action' side of their patterns we have: EURUSD, USDCAD and NZDUSD. Still waiting for resolution, there is GBPUSD and AUDUSD. 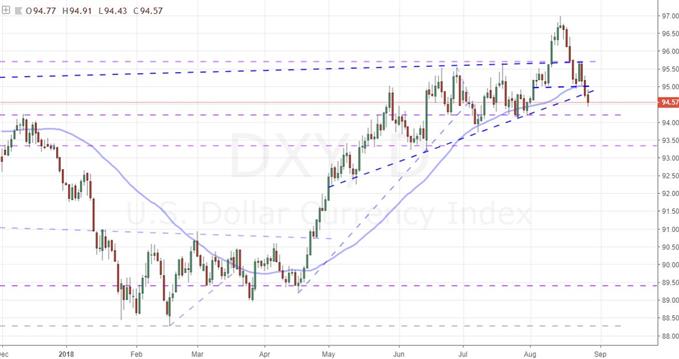 As impressive as the Dollar's progress has been in technical terms, credit is due to the Euro for a more remarkable run and to the Pound were anticipation is more amped. For the second most liquid currency in the world (the Euro), the incredibly consistent bull trend continues. As of Tuesday's close, an equally-weighted Euro index has advanced for 10 consecutive sessions. That is still the longest, unbroken climb for the currency since December 2012. This performance is broadly based with notable progress for the EURUSD, EURJPY and EURGBP in particular. What is even more remarkable about the move is the lack of tangible fundamental drive to support it. There is little has been little on the docket or in the perspective of key themes that have transpired to support lift. And that makes this a trend that we should be more careful about blindly pursuing. In contrast, the Pound is in a position where it looks ready to erupt after days of directionless chop. GBPUSD is arguably the most loaded of the major Sterling crosses, but an equally-weighted Pound index reflects the same tension we get from the Cable. As it happens, the upcoming session offers up a potent catalyst to spark a break with the right outcome. The House of Lords emergency Brexit meeting will tap directly into what has been most influential for driving - and restraining - the British currency. 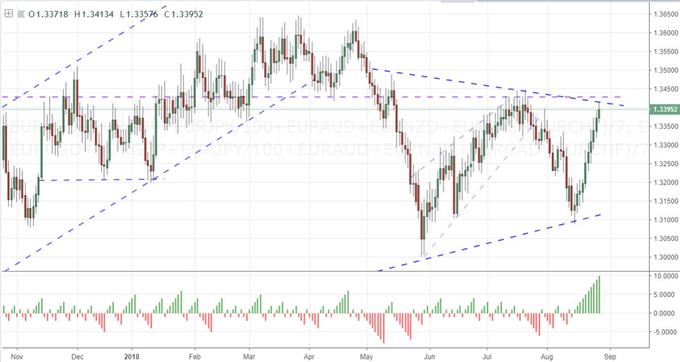 Gold Slides Despite the Dollar's Own Retreat

As much volatility as we have registered in the FX market lately, Gold has refused to leverage the fundamental appeal this threat to traditional fiat would normally represent. Volatility itself is a measure of risk, and a comparatively greater degree of risk for the FX market relative to other asset classes promotes exactly what the precious metal tends to benefit: capital fleeing standard harbors looking for alternatives on a very short list. This systemic flight from fiat is likely still some ways off and on the other side of a financial crisis that embroils monetary policy, but in the meantime, we have seen a sensitive and direct relationship to the US Dollar. Yet, despite the currency's slide this past session, the commodity would also drop through the day. A look at the currency equally weighted in the major currencies shows this was a move originating from the metal itself and not a secondary response to a benchmark. Keep an eye on this asset as true risk aversion is likely to exacerbate a number of unique circumstances in our financial system which leverage the appeal of the metal. We discuss all of this and more in today's Trading Video.