An Exclamation for Risk Trends or Just US Equities to Start the Week?

This new trading week was kicked off with a speculative 'bang'. While there was a broad lift in risk-leaning assets through Monday, there were very few preferred measures of sentiment sporting the same level of charge as what was reflected by the S&P 500. The US index not only produced gap higher to open the day, but in doing so it also erased any hesitation that the late January record was cleared from the slate. In technical textbooks, this looks like a powered breakout which could readily transition into some measure of momentum - a break with follow through. However, such a move would conflict with the general state of the market. Short of the Nasdaq, there were few other risk-tempoed assets that were trumpeting such an incredible degree of enthusiasm. Global equities, emerging market assets, Yen crosses and more are all showing much more reserved appetites. And, there restraint is more in-line with the backdrop in market conditions. Liquidity this week is thin in the final thrust of the Summer Lull. Mounting strong capital inflows in an already stretched exposure to risk trends is a stretch, but doing so when market depth is shallow and few others pace-setting assets have charged the technical conviction is broadly improbable. 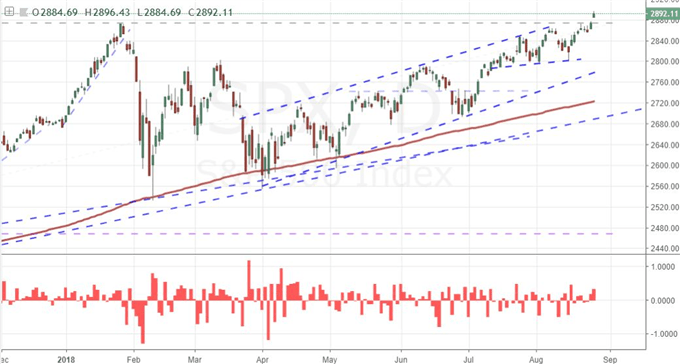 One of the more headline-worthy developments at the start of the week to which the speculative run was attributed were reports that the NAFTA negotiations would finally find some measure of resolution. By the afternoon hours of US trade, we learned that the reality in the state of negotiations was still far from conclusive. President Trump suggested that a deal was close at hand and the NAFTA agreement itself would be scrapped for a more favorable alternative. However, what was formerly offered was more along the lines of a bilateral deal between the US and Mexico with Canada still not party to the agreement. Further, the Mexican President seems to be awaiting Canada's participation before given the country's full endorsement. If this is a genuine buoy for global confidence via improvement in the state of trade wars, we should note the reticence of the Mexican Peso and Canadian Dollar to commit before we go further out on a limb with far less sensitive risk assets. Perhaps as a strong reminder to the state of global trade, we have yet to see any material improvement in the US-China relations on trade even though they resumed discussions last week and the PBoC changed its valuation method for the Yuan in response to its steady depreciation and relentless pressure from Trump on its path. 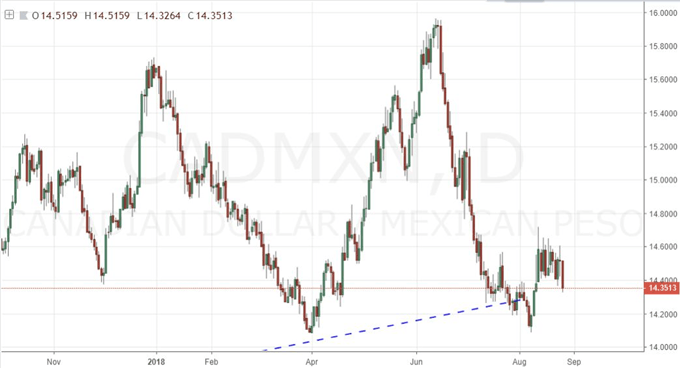 Dollar Threatens a Technical Cliff, Is There Truly So Much Distaste?

Perhaps not as a dramatic a picture as the S&P 500 or Nasdaq hurdling to record highs, the Dollar is still presenting its own pressing technical picture. The DXY Index has this past session cleared three-weeks of range support that could be interpreted as a 'neckline' on a head-and-shoulders pattern as well as a 50-day moving average at 95. A trendline of higher lows forming support for nearly the past four months is still in place, but anticipation can often get ahead of restraint for the technician looking for opportunities. This reads as an imminent 'breakdown' so soon after a false breakout when we cleared 12 months of consolidation with the move through 95.75 just two weeks back. As is often the case, few question momentum as readily as they challenge direction when it forces us to check our pursuit of convenient trades. I am generally bearish, but for bigger picture considerations that are not as readily apparent in recent developments. The higher risk of the Fed tempering its pace, the collective retaliations from the US pursuing tariffs and the interest in diversifying away from the Dollar for reserves are longer term and bigger picture. I don't think they will exact their heavy influence here and now in thin liquidity. Ahead, we have two key indicators: the July advanced trade balance to give insight into trade wars and the Conference Board's consumer confidence survey for fresh political risks. That said, these are not self-sustained depth charges. 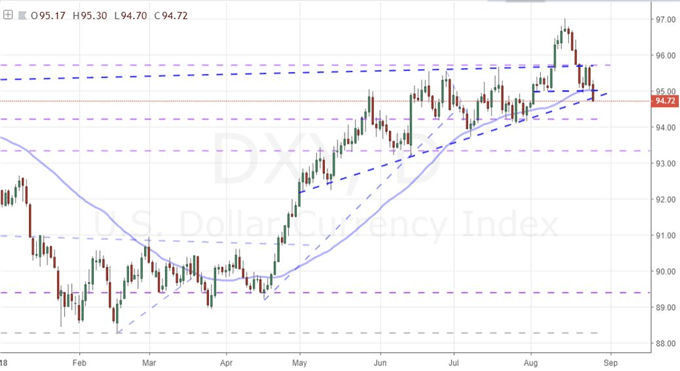 Outside of key risk measures and the Dollar, there is still some remarkable price action unfolding across the financial system. One of the more remarkable moves is on behalf of the Euro. EURUSD has certainly positioned into a key technical formation - as would be implied by DXY - but that wasn't the only such cross to give credit to the second most liquid currency in the FX world. EURJPY advanced perhaps with risk appetite's help, EURGBP defied the uncertainties of Brexit to hit new multi-month highs, EURAUD and EURNZD ignored carry preference, etc. In fact, an equally-weighted index of the Euro showed the currency advanced a ninth consecutive session - winning the same historical record high as Friday's 8th day: comparison to the December 2012 run. Fundamentals are certainly not systemically better for the Euro, but if the Dollar is truly seeing pressure for diversification, capital will usually seek out the next most liquid counterpart. For the Pound, the next 24 hours will be important as liquidity returns after the Bank Holiday, but it is anticipation of Wednesday's emergency House of Lords meeting on Brexit that will truly draw Sterling traders' attention forward. Another impressive run that should be set against the stage of liquidity and fundamentals is gold's more reserved performance Monday. The metal gained through the opening volley of trades, but more likely due to the Dollar's weakness. For a systemic trend, we will need to see motivations more akin to a financial crisis that draws attention to the fading suitability of the Dollar and other fiat currency in a world watered down by central banks. We discuss all of this and more in today's Trading Video.