Dollar Finally Bounces, Stocks Steady After Trump Warns of Crash if He Was Impeached

The Markets Would Crash If I Were Impeached

We have plenty of unresolved themes to account for when trading FX or global capital markets: trade wars, monetary policy's burden, sanctions and more. While not exactly new, we have to raise the threat profile of domestic US political risk. On the back of the guilty plea by President Trump's personal lawyer (Michael Cohen) and the guilty ruling against his former campaign manager (Paul Manafort), the probability of direct trouble for the leader of the country has increased significantly. To a capital market, the political elements of this matter little. The concern for speculators is what the added uncertainty means for their positions. In an interview, Trump said that he believed the markets would crash if he were impeached and the economy would suffer ('everybody would be very poor'). This is certainly an exaggeration to reality as Presidents - and governments as a whole - rarely exert that kind of influence on the system. If anything, their actions lead to a slow and long-term climb or more abrupt decline when extreme. Their absence, however, is not nearly as critical. That said, we have evaluated the various risks underlying our decade-long bull trend regularly over the months. We are just searching out a catalyst to leverage the influence of these risks and quiet the complacent speculative confidence that has prevailed. His assessment may be self-aggrandizing but it isn't altogether wrong. 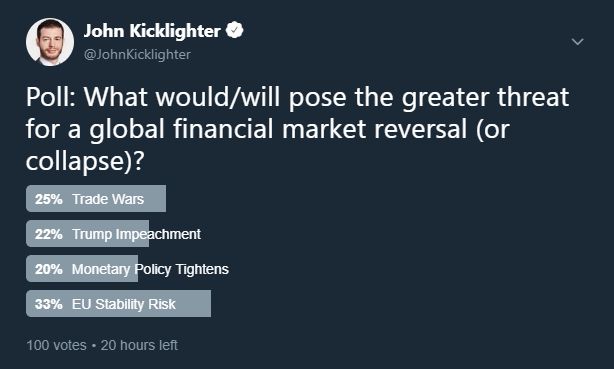 As new headlines draw our attention, it is important to remember that we are still dealing with active though measured themes of systemic importance. As of midnight Wednesday into Thursday, the United States additional $16 billion in tariffs on Chinese goods - and China's like-for-like retaliations - went into effect. This completes the original $50 billion announced some months ago and registers progress on the economic pressure the two largest individual economies are exacting against each other. It is worth remembering that the US is investigating another $200 billion of taxes against its counterpart which are currently open to public feedback through early September. President Trump seems committed to fighting this economic war and the revival of talks between the two nations seemed to earn little progress through Thursday. The other familiar theme that we will return to for the next 48 hours is monetary policy. The Jackson Hole Symposium hosted by the Fed will start Friday and the topic centers on applying monetary policy changes in these unusual economic and financial conditions. Weighing in on the effectiveness of monetary policy at extremes, the dependency of the speculative explosion on easy policy as well as trade conditions skewing divergent policy paths are all important. These issues are unlikely to be accounted for directly, but the market may form its own opinions from what is (or isn't) said. 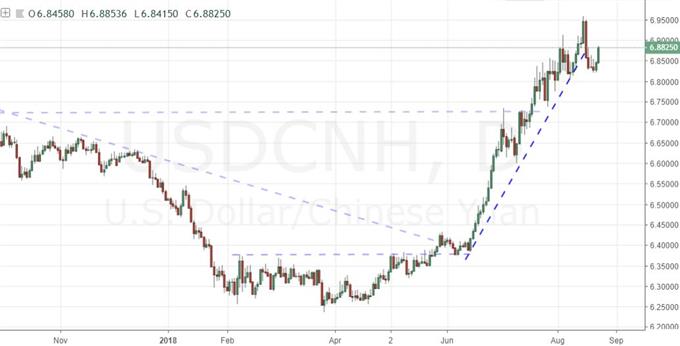 With the additional pressure that President Trump's political risks adds to the outlook for economy and capital markets, it is difficult to evaluate exactly what will drive the Dollar through the final 24 hours of this trading week - much less into next week. The US Dollar finally put in for a bounce Thursday with the DXY capping a consecutive five-day loss that has undermined the technical appeal of a large inverse head-and-shoulders pattern. Given the general conditions in the market, this should come as little surprise. These are not trend-oriented markets. The prevalence and concern in so many conflicting fundamental themes does not align neatly to a market that is so richly valued. Nevertheless, the Greenback is likely looking at greater volatility moving forward. It is wise for traders to remain flexible and alert to see what the masses determine to be of primary concern moving forward. Where the DXY's correction was remarkable, the EURUSD's first drop in six trading days ended an even more remarkable run. That key pair correction however didn't end the equally-weighted Euro's performance. Another broad advance Thursday has notched a 7th consecutive advance for the currency which matches the longest bullish stretch since December 12. The day's data did little to support this move with Eurozone consumer confidence slipping, PMIs offering unconvincing updates, and Italy's Vice Premier threatening to refute paying the EU over immigration. The Euro may not have slipped this past session, but we shouldn't get too enthusiastic about its capacity to keep running by fading probabilities for ECB policy or US relations. 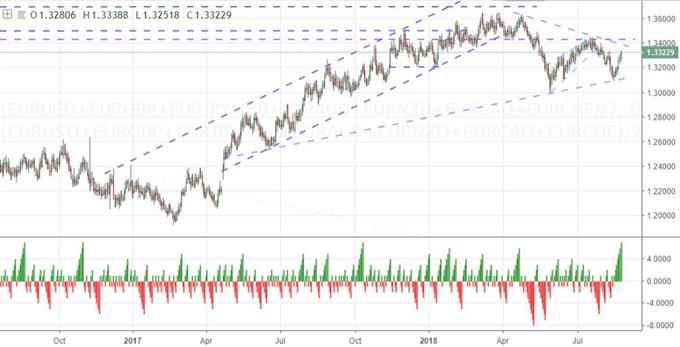 Technical Moves for the Australian and Canadian Dollars, Pound and Gold

The Dollar and Euro weren't the only active movers on the day. This past session, the biggest move was registered by the Australian Dollar. Unlike the US currency, the Aussie Dollar was pressured by its own political uncertainty. The lower house voted to suspend Parliament in a rapidly escalating drama that may very well see the Prime Minister ousted. On an equally-weighted basis, the Aussie currency dropped to a new year-plus low, and the break may translate to more productive moves on certain pairs (AUDCAD, AUDNZD, AUDCHF). A less intense move, but nevertheless technically-remarkable, was registered by the Canadian Dollar. The enthusiasm of a proximate NAFTA resolution that lead both the Loonie and Mexican Peso was unwound. That led to a quick stall on recent breaks - rendering false breaks for both USDCAD and USDMXN. The former was attempting to turn a larger rising trend channel with Wednesday's close through the patterns floor. The subsequent rebound has led to yet another frustrating false break. For the Pound, it should come as no surprise that Brexit once again was dictating progress. The nascent recovery effort for the Sterling and GBPUSD was cut short as the UK government released guidelines on 25 matters for the event of a 'no deal' solution. And, for gold, the hope for a lasting bullish reversal has fallen apart with a slide that matched the Dollar's gains. That said, this commodity should be a regular review for our analysis to keep it on the radar in the event of full risk aversion that drags in monetary policy, financial stability and trade war fallout. We discuss all of this and more in today's Trading Video. 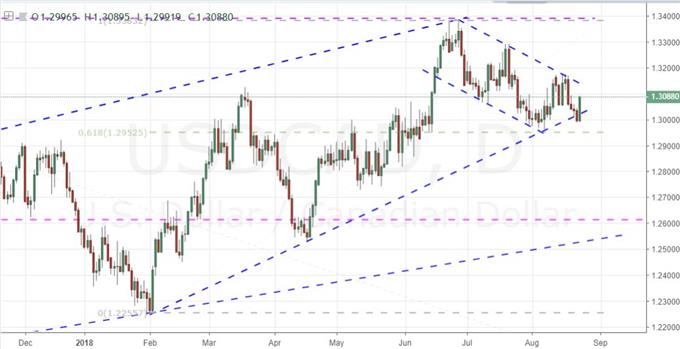 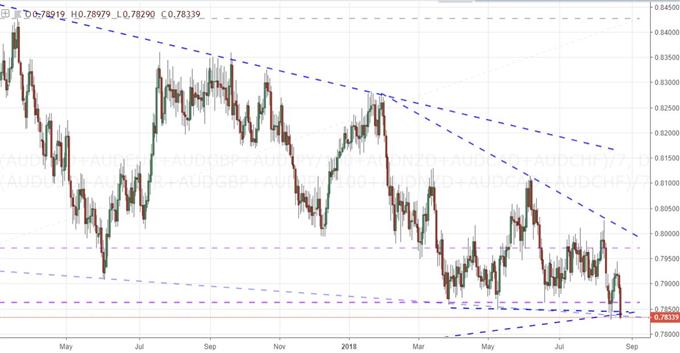