A Record Bull Trend for the S&P 500, Longest EURUSD Slide in 2 Years

The headline through Wednesday's close was yet another record set by the S&P 500. The seemingly serial outperformer notched its 3,453rd day in an official bull trend to break the previously held record through 2000. This is a remarkable milestone to hit and reflects on a period of general economic stability but undeniable speculative appetite. Hitting this milestone should not be anyone's tipping point to level a sudden contrarian view on this benchmark or the broader market, but it should earn a close and objective evaluation of the foundation set to get us here. It is worth mentioning that the record tally on the climb didn't earn a fresh high from the index either on an intraday or a close basis. That is understandable when we evaluate risk trends via other speculative assets. Few European and Asian equity indices are even close to their current phase high much less records. The recently battered emerging markets have comparatively leveraged a strong rebound, but they do so from a deep discount. If market conditions continue to be defined by restricted liquidity owing to Summer Doldrums, it is perhaps better to look for convergence in major risk-aligned asset classes (S&P 500 to EEM or S&P 500 to VEU) rather than plotting single-leg developments that never arise. 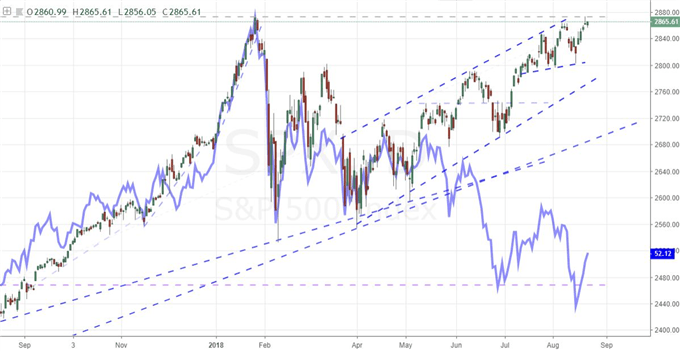 While the benchmark US equity index earned further accolades for its persistent buoyancy, the Dollar was burdened with an unflattering short-term milestone of its own. The DXY Index registered a fifth consecutive decline. That matches the longest series slide in months. For EURUSD, the tally is six straight days of advance with Wednesday's close to match the longest unbroken climb since May 2, 2016. We haven't had a 7 day charge since December 2013 for those keeping track. Just as with the S&P 500, we should be careful about applying technical assumptions to this move. It is highly probable that a bounce for the Dollar will be put in before the end of the week. However, that doesn't mean that it will a technical cap will translate to a reversal that presents strong EURUSD or other Dollar-based major opportunities that can overcome the liquidity restraints on our broader markets. This past session, the FOMC minutes has returned some awareness to Fed policy forecasts. The transcript from the last meeting showed the group is confident in a hike come September, but there is dimming convictions beyond that. The mention of concern over global trade did not go unnoticed - but it didn't earn the Greenback any further trouble. There is plenty on the Dollar's fundamental plate ahead - US PMIs, trade talks, Jackson Hole, political uncertainties - but the best that is likely to do is further curb fruitful trends (bullish or bearish). 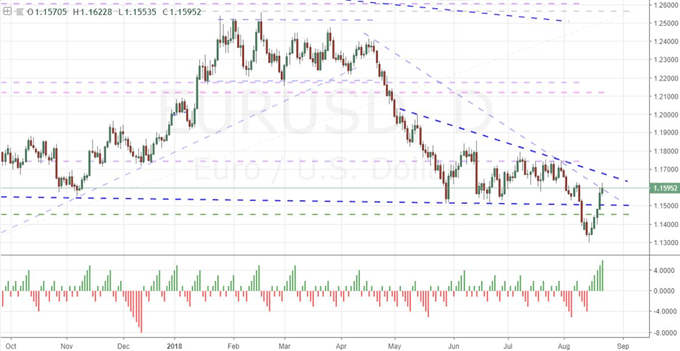 It has been a while since the trade wars have garnered headlines for genuine market moving influence. The past weeks has instead been dominated by a possible evolution - or simply complement - to the tariffs through sanctions. The US-led economic penalties placed on Turkey, Iran and Russia have yet to be resolved; but the shock value seems to have been spent just as with the trade war. Now, it is a bid to see some of the long-term implications to start showing through economic and financial readings. That said, we may see another jolt of activity via trade talks. US and Chinese authorities revived their talks after a multi-month hiatus this past session. There is as yet no encouraging remarks from the negotiators on either side and President Trump stated earlier in the weak that he expected no meaningful progress to be made in these discussions - further deflating any early enthusiasm. Meanwhile, the additional $16 billion in import taxes (rounding out the originally intended $50 billion) go into effect at midnight turning in to Thursday. Keep an eye on USDCNH and Chinese assets (Shanghai Composite and FXI) to garner clearer speculative benchmarks on these discussions. In a tentatively positive turn for trade talks, NAFTA representatives have voiced more confidence as of late. The Mexican finance minister remarked that a breakthrough was likely soon, though the US Trade Representative office seems to be on a different page. Nevertheless, both USDMXN and USDCAD earned tentative technical breaks lower that we should keep eyes on.

Looking out over the final 48 hours of trade this week, we will finally wade into meaningful, scheduled data. That doesn't systemically alter the case for liquidity and trend development, but it can at least generate enough activity for short-term market moves that are already staged on a technical basis or supported by systemic setups that have simply lost their drive. The global PMI figures - monthly activity surveys that are good proxy for GDP - offer the most comprehensive assessment of the economy. Yet, these series have poor records when it comes to establishing meaningful market-based responses. That goes doubly for these illiquid conditions. Trade talks will certainly carry sway over the Yuan and Chinese assets, it may also give weight to emerging market swings; but the markets are likely to remain aloof to the deeper implications for the Dollar unless there is a definitive breakdown in talks or unmistakable resolution is in sight. Then there is the start of the Jackson Hole Symposium hosted by the Fed and starting early evening in the US Thursday. The three-day event will be kicked off by Fed Chair Jerome Powell's speech. There have been some notable revelations to come out of these annual meetings in the past with significant market reactions, and there are a host of troubling risks to the financial system at present. However, we should prepare for the possibility of volatility but not assume it will show. We discuss all of this and more in today's Trading Video.