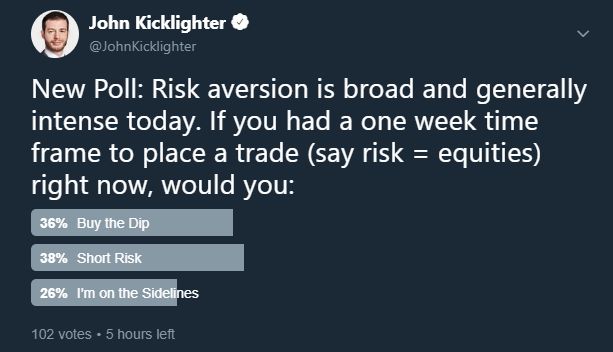 See how retail traders are positioning in EURUSD and other Dollar-based FX majors along with indices such as the DAX, gold, oil and more on an intraday basis using the DailyFX speculative positioning data on the sentiment page.

Another Check Against a Full-Commitment Risk Aversion

After Wednesday's broad and intense move towards risk aversion, investors faced the very real possibility that capital markets may be closing in on the end of a decade-long bull trend. That risk - nor the concern in the market - does not change simply because we have a rebound in the benchmarks we use to monitor sentiment. There was indeed a bounce through Thursday's session which effectively hit the pause on a full reversal in underlying sentiment from unfolding here and now. The check higher was broad, but its drive was far less convincing than the stumble that preceded it. Further, the bounce was uneven. Arguably, the most impressive move was registered by the US blue-chip Dow Index which earned its biggest daily advance in a few months. Meanwhile, the supposedly leader for US equities - and by virtue of that asset's class outperformance, a possible leader for global markets - the tech-concentrated Nasdaq was an advance on the day in only technical terms. Meanwhile, emerging markets were unconvincing as a recovery while carry trade, Treasury yields and junk bonds were similarly floundering. It is perhaps comforting to look ahead to Friday or next week's thin economic docket and presume that we will naturally fall back into the 'Summer Lull'. However, investors should remain on alert. We have a laundry list of thematic and concentrated risks to account for moving forward and some of the most painful declines in the past 10 years took place in August (2011 and 2016).

Sanctions and Trade Wars Continue to Unfold in the Background

While I would label excessive monetary policy and the abundance of leverage systemic risks to financial markets moving forward, the more immediate threat to global markets is through the deterioration of diplomatic and economic relationships. It would seem an easy opportunity to spur a recovery rally by pulling back from the political tension, there seems little will to relinquish the 'growth at others' expense' approach that these efforts track out. With that said, there has been no relief in sanctions since the United States moved to penalize Iran, Russia and Turkey for various offenses. In fact, Treasury Secretary Mnuchin remarked Thursday that the government had further sanctions ready should the country's President continue to refuse the release of the American pastor who touched off this international crisis. To truly appreciate the big picture, however, it is important to remember that the greatest risks from the United States' pressure on these three countries are the consequences for closer trade partners - like the EU which has considerable exposure to Turkish financial markets and is scrambling to salvage the nuclear deal with Iran. For the predecessor to sanctions, the trade wars seemed to find a glimmer of hope in the rapidly escalating situation between the US and China with the countries' representatives announcing talks scheduled for late next week. It is possible that the two may break the impasse, but we have seen optimism dashed multiple times over the past months. 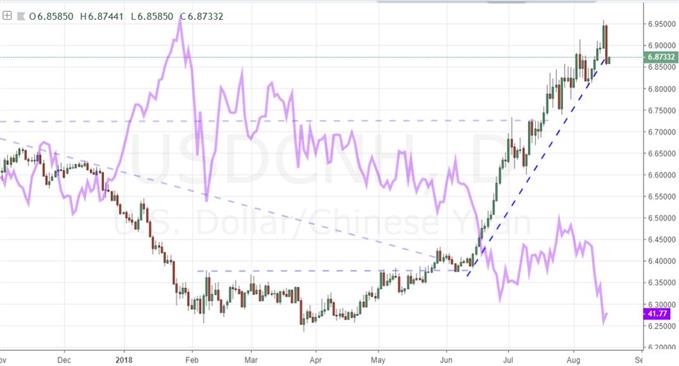 We are still on the 'action' side of a high profile technical reversal from the US Dollar, and yet progress continues to elude the benchmark. Following the critical bullish break of its inverse head-and-shoulders pattern 'neckline' last week, the DXY Dollar Index has registered far less lift than we would normally expect from such a long-term period of consolidation. That has much less to do with the technical factors at hand - in fact, that side of the equation is nothing short of pristine - and largely falls to the factors of speculative positioning and fundamentals. As we have been following in the COT's speculative positioning figures, futures traders have swing from a five-year net short position on the greenback to a two-year net long in the span of just months. There is therefore far less discount to pursue on a speculative basis than traders would like. Fundamentally, the path higher is far more difficult to negotiate. The safe haven appeal for the Greenback is explicitly tailored to an extreme liquidation scenario while anything short of that extreme highlights the currency's presence as a carry as well as its position at the middle of so much controversy. The Trump Administration's drive of sanctions and tariffs has increasingly isolated the currency and economy. We just have yet to see the ramifications of this exploited. Not until risk aversion kicks in will it truly be felt. But we could see this rebound stall and turn well before we come to that systemic realization. 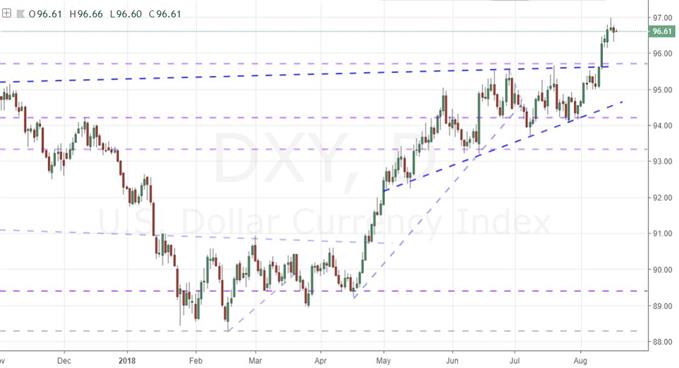 An Oil and Metals Rebound Worthy of a Collapse, A Canadian Dollar with Hefty Event Risk

In the universal unwind in speculative exposure Wednesday, commodities registered one of the most intense moves among the various asset classes. It was therefore only fitting that the rebound this past session was impressive among so much uneven performance. The collapse in copper and silver earned hearty rebounds - though neither came close to fully offsetting the initial slide. It was therefore remarkable that the most heavily-traded metal (gold) didn't even register a gain for the day. A strong tumble through the front half of the day meant that the rebound was fighting for breakeven. What we ended up with was a large 'lower wick' - one of the largest in years. Traditionally, this is a technical signal for reversal, but this has not proven a reliable cue for gold. Oil was similarly disappointing for those looking for a true reversal. US crude has yet to return to the former channel support to stage it new resistance. For activity through the end of this week, traders would do well to keep a close eye on the speculative barometric pressure. Yet, there will also be more disconnected fundamental themes to deal with for particular markets. The most concentrated scheduled event risk will come through the Canadian docket. Consumer inflation data will guide BoC rate expectations while the capital flows statistics will offer a tangible read on the NAFTA and trade wars influence. More open-ended will be the Pound's constant exposure to Brexit negotiations. We are heading into the second day of an EU-UK technical discussion on the divorce and the Sterling has already bled off plenty of premium these past months. We discuss all of this and more in today's Trading Video.