See how retail traders are positioning in EURUSD and other Dollar-based FX majors along with indices such as the DAX, gold, oil and more on an intraday basis using the DailyFX speculative positioning data on the sentiment page.

Risk Trends Without Dependency on a Specific Theme

Over the past months, we have experienced some remarkably intense bouts of volatility. Yet, each time the flash of activity would settle and the appetite to buy dips and the buy-and-hold hold outs were rewarded. These sparks have been the product of concentrated event risk for certain asset classes which carried the potential to play the trigger for a more systemic shift in system. The tariffs implemented by the United States - and subsequent retaliatory taxes - were one threat to financial stability and growth. Earnings from the tech-favored FAANG members these past weeks was another fundamental milestone via the group's status as leader to the tech sector which itself paced US equities - an asset class that has heartily outperformed most other favorite assets. And, just this past week, the attention turned to the emerging markets. With a new strategy of onerous sanctions, the US put pressure on Turkey, Russia and Iran with dramatic results in their respective currencies - though the ripples back into the core financial assets was still showing certain restraint. Yet, what we have seen in speculative markets this past session impacted all of those particular assets and more. The swoon was not a swoon from a particular catalyst but in market confidence itself. If a genuine bearish turn in the global financial markets is to take, it will most likely follow the a course of systemic deleveraging rather than follow the lead of a particular financial asset or region. Keep close observation of our markets and have a strategy to follow the trends that prevail - bullish or bearish.

Take Note of a Pick Up in the Frequency of Volatility

Another interesting aspect to take note of in the broader markets to speak to underlying conditions is the 'volatility of volatility'. In other words, the frequency of strong volatility events seems to be increasing from previous years. Just in the past months, we have seen strong swells in speculative benchmarks following the aforementioned emerging market, earnings update and US-China trade war developments. And, before these targeted developments, the extreme volatility through the open of February restored our belief that sentiment itself could falter. There have been a handful of extraordinary volatility events further back through the course of this near decade-long (and soon to be record) bull trend, but they have eventually given way to the persistence of the dominant bull trend. Extraordinary activity in January 2016, August 2015, and August 2011 are all remarkable; but markets ultimately returned to form. The risk that we finally reach a permanent turn in the indefatigable bull trend is increasingly through overlapping points of tension. This frequency of sudden flight-to-quality, the ends of monetary policy, rise of protectionism and mainstream appreciation of the gap between value and price are all forming into the prevailing qualities of the market. 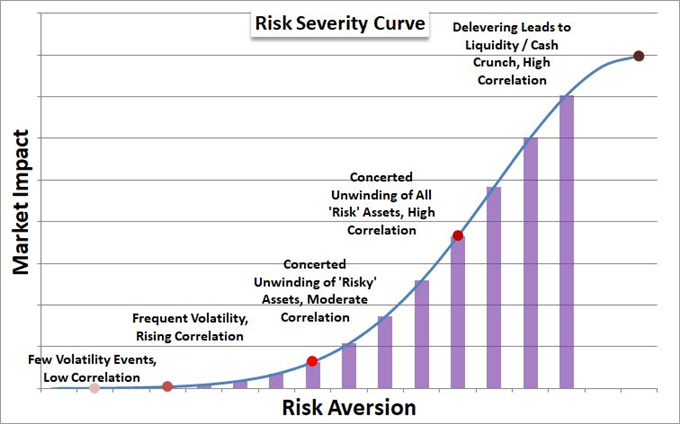 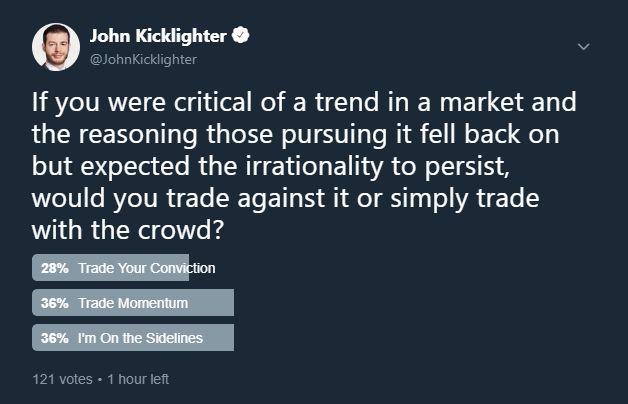 If the Dollar Doesn't Gain Traction, That EURUSD Head-and-Shoulders Will Flounder

Through the recent bought of volatility, there have been some remarkable and some unexpected developments. One of the more interesting developments has come on behalf of the US Dollar. For many, the gains for the Greenback this week seem perfectly suitable to the currency's long-standing position as an ultimate safe haven. That role is still value if we are to see a systemic deleveraging that threatens financial stability and credit conditions. However, short of that extreme, the benchmark currency's role is more nuanced. In a more moderate degree of general deleverage in risk assets, the Dollar's relatively new role as a carry currency could put it in the unusual position of being sold off during a flush of superfluous high-risk/low-yield investments. Adding to that pressure, the Trump Administration's appetite for tariffs and sanctions has put the world's largest economy at increasing odds to the rest of the world. That in turn can encourage diversification away from the Greenback as has been suggested at various times by European, Chinese, Turkish and Russian officials in recent months. If the Dollar can't make the case for a strong drive forward, some key technical moves that have developed across the majors may fall apart. In particular, EURUSD's high level head-and-shoulders pattern may not provide the strong follow through a pattern of that scale would deserve. 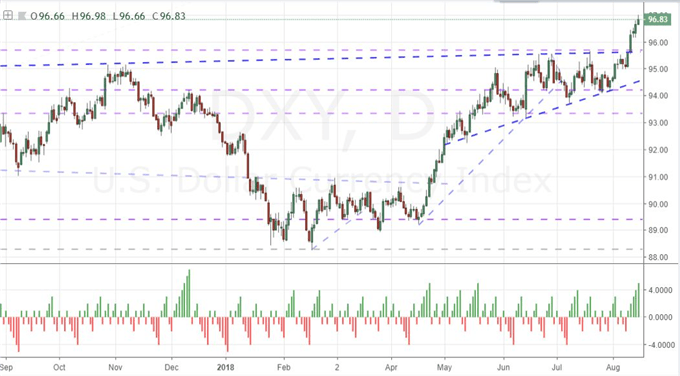 Heavy Technical Moves for Commodities, Keeping Tabs on Other Themes - Just in Case

In this past session's risk aversion, there was a wide-range of markets that took a spill. One of the more unexpected participants to the tumble was the commodities market. While not the first asset class associated to the ebb and flow of speculative appetite, these natural resources are pursued for speculative gains and are further sensitive to the underlying implications of financial market health on economic activity. There were remarkable moves for the standards. Gold took another steep drop in a long running tumble to hit fresh lows dating back to January 2017. Looking to the other metals, growth-staple copper entered a bear market after a 4.5 percent drop on the day while silver's 4.2 percent slide has added an exclamation point to a record-breaking 10 consecutive week drop. What is perhaps most impressive given its broader circumstances though was US oil's break below 66. Long resistant to forging a new trend when faced with the potential of a meaningful technical break, crude finally broke its 10-month long - and well-worn - channel support. This is a remarkable technical jog, but it does not guarantee follow through. Meanwhile, back in FX, there are some remarkable moves that have been months in the making rather than just the past week. Sterling traders eagerly await comments from the sidelines of the UK-EU technical discussions on Brexit, the Australian Dollar long in retreat actually closed Wednesday slightly higher ahead of its key data and the Canadian Dollar printed a sharp drop following the previous session's achievement of a new multi-month high. We discuss all of this and more in today's Trading Video. 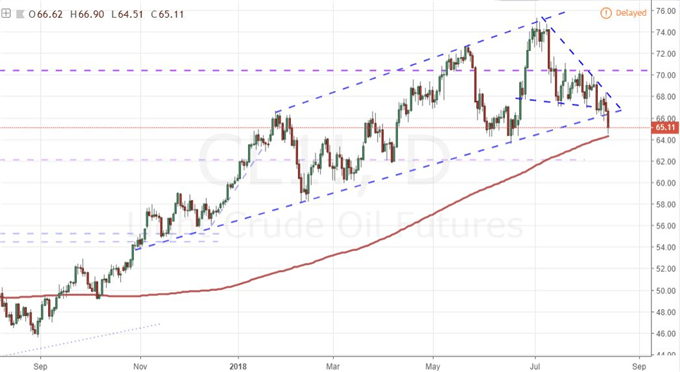