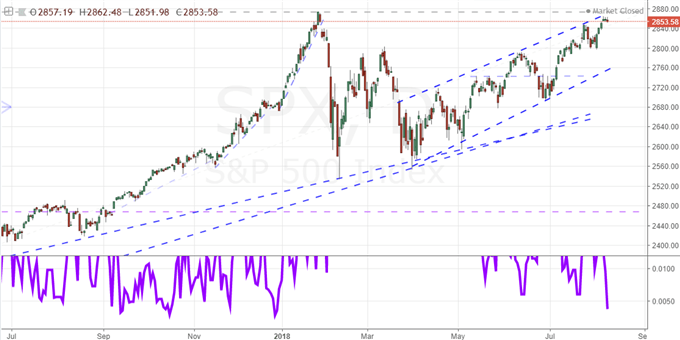 EURUSD On the Verge of a Technical Break, S&P 500 Inactivity Should Trouble Bulls

Activity Grinds to a Halt, Threatening the Recovery for Risk Assets

The seasonal summer lull is exerting its influence on the capital markets with extreme efficiency. Not only are we seeing the typical fade in expected (implied) volatility through measures like the VIX index, but we are seeing the telltale discount to otherwise extraordinary event risk. The news of the US and China applying an additional $16 billion in tariffs against each other or the implications of the standoff between the US and EU threatening business sanctions against each other over Iran are nowhere to be seen in the standard risk assets. The disconnect is starting to show some of its own extreme readings. The correlation across assets that are connected through investor sentiment has all but disappeared alongside activity levels. As an extreme reading, the S&P 500 has established its smallest three-day range (as a percentage of spot) since December. More than the holiday conditions connection, we haven't seen a 0.4 percent range over a 72 hour period but a five or six times over the past three-plus decades. In other words, this is extreme even for the 'Summer Doldrums'. Extremes beget more extremes. We are likely to see explosive activity in the foreseeable future - bullish or bearish depends on the catalyst - but that may be days or weeks from now. Preempting such a trade could lead to a long frustrating weight or quick loss as readily as a favorable burst of activity in a trade's favor.

The Dollar has Moved into Position and EURUSD Along With It

Though the Greenback hasn't covered exceptional ground or spurred any extreme moves lately, the measured progress it has put in for has moved the benchmark to border of a particularly overt technical pattern. The trade-weighted DXY Dollar index advanced to its highest close in over 12 months, but that has not resolved the resistance established in a trendline that dates back to last year. This particular chart boundary completes a more complicated technical pattern: the neckline of an inverted head-and-shoulders pattern. Such formations often stage some of the most productive reversals, so its presence should be monitored closely. A bullish break is possible, but the follow through would be particularly difficult to fulfill. Market conditions are not just restrained for speculative assets, they are a burden for most liquid assets with a fundamental and financial connection. The Greenback is no different. Add to that the medium-term implications of trade wars, the questionable stance the currency maintains as a safe haven and the skewed influence in any monetary policy changes; and the course for a bullish break is difficult to chart. It can be easy to perhaps objectively critique the DXY as few trade it. But would you make the same detached evaluation for EURUSD as it approaches 1.1500?

Weighing Follow Through for a Consistent Pound and Dramatic Kiwi Slide

Where the US currency's climb into a tempting technical position has been measured, there have been a few ambitious and action-oriented moves amongst the majors that suggest the seal has already been broken. Yet, this is not exactly a distinction between those currencies and markets that have had the technical or fundamental triggered pulled but rather a general lack of market depth to make follow through reliable. We should keep that in mind as we evaluate the potential for the New Zealand Dollar and Pound. For the former, the tumble this past session was triggered by the RBNZ's rate decision. While it was a hold clearly as was expected and a dovish rhetoric also as expected, the concern from Governor Orr seemed to strike a nerve questioning the underlying appeal of the New Zealand currency's use among the majors as a carry. This is a systemic risk but is a theme that will is playing out 'all of a sudden'? No fundamental lights have been switched and there isn't a ready supply of speculative liquidity in general. For the Sterling, the five day slide only broken this past session seems more entrenched if not as severe. While that may seem to better satisfy a need for unique conviction, the rising probability of a 'no deal' Brexit will neither be confirmed nor squashed definitively in the immediate future. Evaluate thoroughly expectations for pairs like NZDUSD or EURGBP whose technical pictures say one thing but where market conditions may indicate another.

Another area of the financial markets that seem to be deviating from the norm is the emerging market currency corner. The EEM emerging market ETF for capital markets is showing the same congestion as benchmark equity indices, but many of the most active and liquid currencies have tendered remarkable technical pictures. The Turkish Lira (USDTRY) and Russian Ruble (USDRUB) have both dove versus the US Dollar, but this was clearly the result of unfolding domestic conditions and fresh US sanctions. These are not systemic developments. Other pairs like the USDMXN (Mexican Peso), USD BRL (Brazilian Real) and USDZAR (South African Rand) have more temperate technical breaks which set more reasonable expectations. Meanwhile, oil has moved to the floor of its multi-month rising trendchannel yet again, but has refused to make an effort at break or reversal. Gold meanwhile forced a short-term break at the end of its multi-month slide, but it was a move of necessity rather than intent. Ahead, we have a few pockets of event risk that can charge directed volatility, but set expectations for market response against this underlying discussion of liquidity. The Pound has the longest list between 2Q GDP, trade and construction. The Canadian employment report is a frequent volatility charge but rarely spurs trends even in more active times. We discuss all of this and more in today's Trading Video. 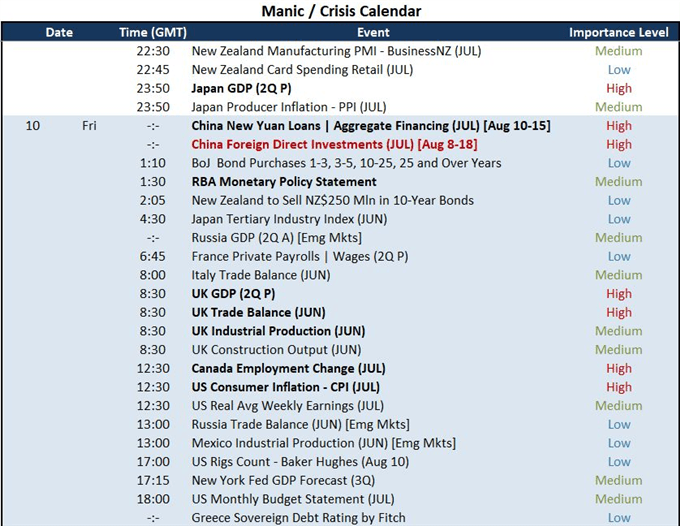