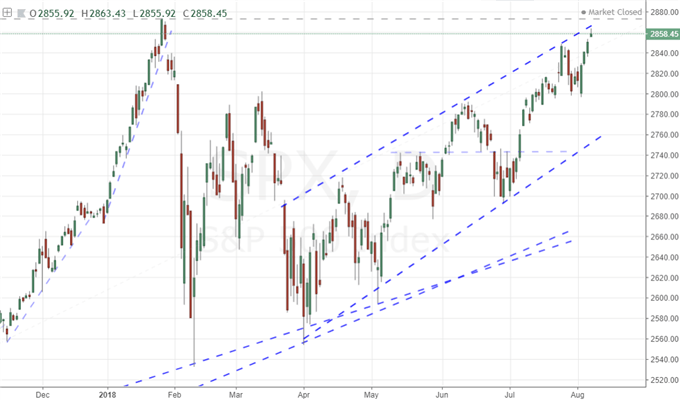 S&P 500 Within Reach of Its Record High, Dollar Eases Back from its Own Break

Sign up for the live webinar coverage of the RBA and RBNZ rate decision, UK and Japan GDP release along with other regular trading conversation on the DailyFX Webinar Calendar page.

Among Uneven Risk Trends, Enough Lift to Push S&P 500 to the Verge of Record Highs

Without a fresh, top-level fundamental driver on the headlines to focus the market's fear or enthusiasm; the speculative markets were notably lacking for charge Tuesday. That said, there was still a mild bullishness behind most benchmark 'risk' assets. In global indices, the unexpected rebound from the batter Shanghai Composite lead Asian equities while the FTSE 100 was the outperformer for its own European session. During US hours, the FAANG's leader role was culled while the Nasdaq underperformed the broader Dow and S&P 500. There was enough lift to the market to edge the S&P 500 tantalizingly close to overtaking its January high and once again earning the favorite index its accolades for setting records. Yet, hitting a record and re-establishing a bull trend are two very different outcomes. We are the midst of the 'Summer Doldrums'; and while it is possible to form a trend for a key market, it is improbable without a remarkably robust fundamental backdrop to supply the lift. Beware setting unrealistic expectations in this environment.

Trade Wars That Register and Trade Wars that Don't

In addition to the thin liquidity and speculative reach that make further bullish progress difficult, there is further an abundance of unresolved fundamental risk that continues to pull at the market's ascent. Themes such as distortion created by a dependency on monetary policy and the general state of risk trends are continue to plague those willing to pay attention, but trade wars are currently the most obvious oppressive force. There were two headlines that threatened escalation of this plague on growth and financial stability - one more readily registered and the other less overt in its potential threat. After the US close, the United States Trade Representative announced that it was ready with its list of Chinese goods for the additional $16 billion to round out the $34 billion already implemented. This 25 percent duty is due to go into effect August 23. With each step forward, the risk of more disorderly economic warfare grows. As Chinese retaliations and details on the United States' next $200 billion are made clear, the pressure will be felt. As troubling as the US-China situation is for its forthright progress, the subtle escalation in tension between the US and EU is more ominous. Though US President Trump and US President Juncker promised to avoid new tariffs while they negotiated, Trump threatened in a tweet to cut off US business with countries that continued to hold open economic ties to Iran. Aid to the EU Foreign Policy Chief Mogherini stated however that the EU would sanction any European companies that cut off business with Iran in compliance with the US demands. If these two leading economies revive their engagement, it could readily tip fear.

Dollar Stumbles at its Technical Boundary

Like the S&P 500, the Dollar has recently mounted an effort to return to its own highs. While certainly not a record, the consistency of the technical boundary standing before the trade-weighted DXY index and the EURUSD is hard to miss. The speculative implications of a break or reversal from this boundary would likely carry heavy anticipation. Yet, market conditions will not make a resolution - bullish or bearish - easy to establish. The docket is notably barren for the Greenback with only the monthly inflation statistics even registering on the scales latter in the week - and those are significantly undermined for influence given the Fed's commitment to forward guidance its path of hikes. The heavy implications behind a systemic retaliation in trade wars to attack the instigator and a universal distortion of monetary policy are certain Dollar threats, but they are perhaps too complex or ambiguous to register a clear speculative response from the benchmark currency in these uneven trading conditions. The currency slid slightly this past session in a measured range move. The pullback from pairs like EURUSD does not establish conditions for a certain swing trade, but it is a more probable course than a breakout with follow through. 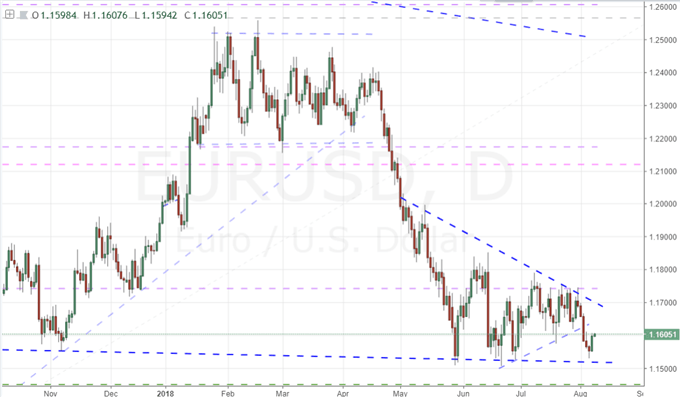 While the tame pace from the various risk assets and US Dollar make it easier to check our speculative appetites, there are other markets where trend and recent volatility are pressuring our objective sensibilities. For intensity, this past session saw sharp moves from both the Australian and Canadian Dollars. The former saw a break higher on a well-established wedge through an equally-weighted index despite a status quo RBA rate decision. Meanwhile, the Loonie didn't even have so definitive a spark to contradict; rather, it only had the open headlines surrounding the NAFTA negotiations. Nevertheless, the Canadian currency dropped sharply from its steady advance. These look like provocative moves, but we should evaluate their potential through the same lens as the other markets. The same goes for gold, which is still forging its bear trend and threatening to slide through the midpoint of its past four years' range. As risk trends and the Dollar rise, this safe haven and anti-fiat alternative will suffer. That said, given the alternative scenarios are more loaded; so too is the recovery picture long-term for the commodity. We discuss what market trends and setups look reasonable and which are simply tempting our need for action in today's Trading Video. 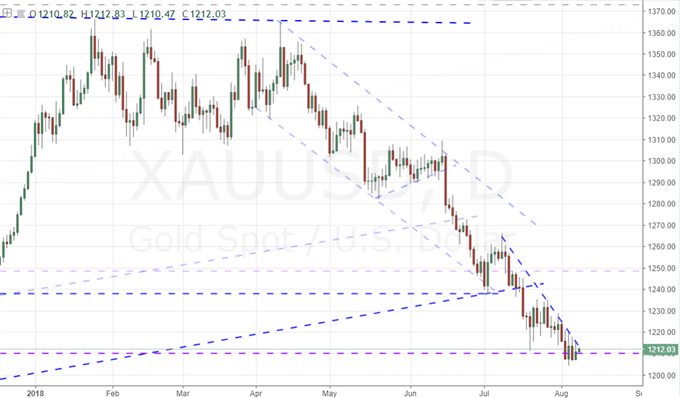