Sign up for the live webinar coverage of the RBA and RBNZ rate decision, UK and Japan GDP release along with other regular trading conversation on the DailyFX Webinar Calendar page.

A Loss of a Leading Fundamental Charge

The potential for trend has escalated in recent weeks amid the rise of high-level - though sometimes conflicting - fundamental themes. Yet, that pressure is starting to ebb and the market's lassitude is starting to creep in. It is easy to assume the seasonal trading syndrome known as the 'summer lull' is kicking in right on cue - August is the most restricted trading month for the S&P 500 in volume terms - but that would be particularly presumptuous considering the scale and complexities of risks we currently face. While it would be a dangerous decision to simply commit to complacency, it is certainly the case that the leading systemic threats of previous weeks have ebbed - if only in attention rather than fundamental uncertainty. For the 'risk' bulls, the FAANG earnings of the past weeks ended with Apple's impressive stats and the subsequent charge to record highs north of a $1 trillion market valuation. Yet, the ability of this single company's windfall translating into lift across the financial spectrum is improbable at best. Meanwhile, those involved in the US-China leg of the trade war are doing their best to escalate the tension to make it visible, yet the concern doesn't seem to be spilling beyond the performance of the Chinese Yuan or Shanghai Composite. That will change, but it doesn't have to immediately.

In terms of traditional fundamental listings on the economic docket, the listings for the US Dollar are remarkably thin this week. The top listing in terms of economic indicators is the US CPI inflation report, but that isn't due until Friday and its main implications for Fed timing no longer matters given the certainty the central bank has set for its policy intentions. Of course, the Greenback - like any other major asset - can be blindsided by unforeseen development. That said, we cannot reasonable prepare for something completely unknown so it makes little sense to do more than maintain a loose plan should the unexpected occur. If we consider the data too light and the markets unwilling to delve into the complex risks of instigating a global trade war, we should consider the technical and positioning considerations for the majors. The Dollar's has consolidated on an index basis near multi-month resistance as the COT showed speculative interests rushing to catch up to the heavy, technical correction. Not all pairs offer robust technicals, cooperative counterpart and speculative overreach; but EURUSD seems to fit those considerations well. 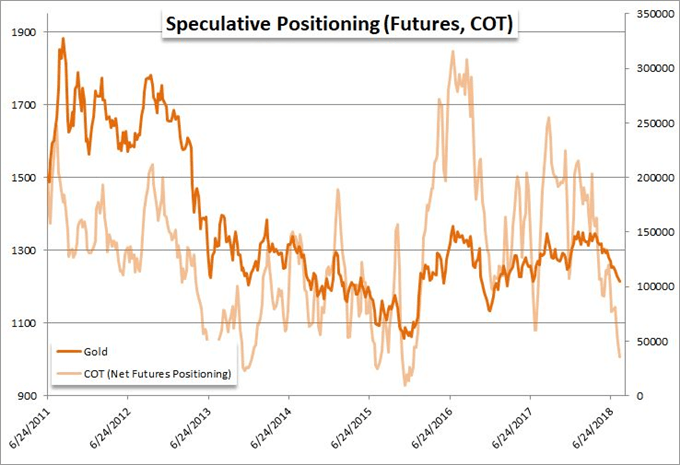 If we are looking to direct our attention to reasonable bouts of volatility over the coming 48 hours, there are two currencies that are particularly charged via their economic dockets: the Australian and New Zealand Dollars. Both are due central bank rate decisions, and both carry an extreme sense of certainty that make them particularly prone to any cracks that cater to speculation. In the upcoming Asian session, the Reserve Bank of Australia will deliberate its own policy path. Looking to overnight swaps, the market is certain (pricing in 0.0 percent probability of a surprise outcome) that the group will hold its benchmark rate unchanged. This is not about whether they hike or not but instead if there rhetoric sports any whiff that there is a chance to encourage a change in future meetings. It is difficult to 'disappoint' - or raise dovish/bearish response - given the market's setting; but suggesting they will consider another cut if the housing market continues to slide could certainly incur a move from the Aussie dollar among pairings that it isn't already steeply discounted - like AUDNZD. The same general situation exists for the New Zealand dollar and RBNZ Wednesday afternoon, but we will consider those pairs more closely in tomorrow's video.

Limited Progress for Pound, Gold, Crude and Most Markets

As we find restraint in those assets where themes (earnings and trade wars) or event risk (RBA and RBNZ decisions) are heavy, there are also active markets with genuine progress which are increasingly living on borrowed time. It is important not to be drawn in by these seemingly unrestricted assets as their ability to fight the curbs on speculative ambition can quickly fall apart. One of the more impressive, recent developments has been the Sterling's slide. After nearly two months of frustrating congestion, the currency finally dropped support in its equally-weighted index this past week following a BoE rate hike - of all things. It isn't that this move defies convention that is so suspicious. Rather, the more dominant influence of Brexit is far from finding relief or directional charge. I am dubious of moves like that wedge break from GBPAUD but very skeptical of the build up from more heavily crosses like EURGBP. Meanwhile, the commodity market is producing price action that draws varying levels of skepticism. We can see that oil traders are very familiar with the inability to mark a critical break much less an impressive and consistent trend. News that Saudi Arabia opened its shipping back up through the Red Sea straight generated little impact. Gold meanwhile has settled on a new close-based low last seen since early in 2017. That does not translate into a crucial break for immediate support, however, and the long-term fundamental potential is still heavily skewed. We discuss all of this and more in today's Trading Video.