Though investors are far more hesitant over the persistent climb in capital markets that has essentially defined the past decade, there is still a latent appetite for exciting headlines. Apple's post-earnings advance to record highs this past week would not have generated the level of enthusiasm it did if it were not for the fact that it became the first publically-traded company to have its market capitalization (market cap) surpass $1 trillion. This is a capital market milestone on par with the major indices hitting their psychologically-important levels (Dow above 20,000 and S&P 500 through 2,000). This sates speculative appetites, but it doesn't set the foundation for the next systemic bull leg. If robust GDP, Fed confidence and the aversion of a trade war erupting between the two largest open economies (the US and EU) couldn't anchor a lasting move, a single company's measured valuation bump to hit a technical milestone stands little chance. Whether speculative milestone or top flight fundamental event, risk trends are far less secure than what we have seen in the past. It is against that backdrop that we should evaluate the positive and negative developments that we absorb moving forward. In this environment, restraint for further gains is far more likely and the possibility of accidents to tip systemic risk aversion is growing dangerously real. 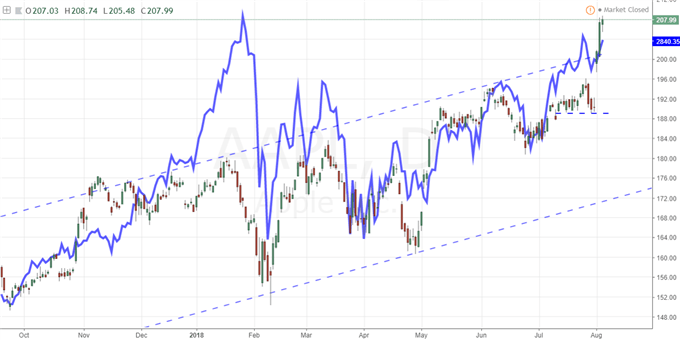 Trade Wars Look to Steal Back the Spotlight

If trade wars have not been the dominant theme for moving the global financial markets this past week, it wasn't due to a lack of trying on the major participants' parts. However, with the flash from the Apple earnings and milestone fading, investors will turn their attention to what takes over the headlines through the week ahead. The economic conflict between the United States and China has taken a decisive turn likely to foster further escalation. The scale of the threats have notably increased through the past week's actions. Ensuring his efforts to up the ante weren't overlooked, the President Trump directed the country's trade representative to evaluate implementing a 25 percent tariff on the previously-announced $200 billion range of Chinese imports (from 10 percent previously). Vowing a tit-for-tat response, China on Friday proposed Friday taxes on another $60 billion on US imports - which would bring the tally close to the total tab for all US goods (approximately $130 billion last year). It seems impossible that this situation could grow any more extreme, but it was managed. Chief Economic Adviser to President Trump, Larry Kudlow, remarked provocatively in a press conference that there were signs of an economic slow down in China and that the Yuan's tumble could be a sign of capital flight. This is global trash-talking another country's financial markets which is typically out of bounds. Attempting to destabilize China's effort to balance their economy and financial markets is likely to prompt an uncouth response. With each volley, the risk of a currency war or some other destructive and unconventional threat grows.

Despite a laundry list of high profile fundamental event risk through the final trading session of the week, the Dollar was left without a conclusive break to close the past week. Top billing was the July employment data. The headline figure - the change in payrolls - was a disappointment with only 157,000 jobs added to the economy versus the 193,000 anticipated. That said, it was yet another increase in employment. Further the unemployment rate ticked lower to 3.9 percent and average hourly earnings growth kept pace (2.7 percent). The trade report, however, had fewer silver linings an increase in the deficit to $46.3 billion versus the $43.2 billion shortfall before. The most underappreciated economic shortfall was the ISM's services activity measure. A sharp drop for an economic measure that accounts for three-quarters business activity and employment in the US is more economically troubling than simple interpretations will appreciate. It is amid this mix that the DXY and an equally-weighted Dollar index failed to transition into a bullish break to revive trend. The pressure is still in place, but the capacity for a break next week is materially deflated with a thin docket. Keep your eyes to the headlines for updates on systemic themes (like trade wars) because US CPI will resolve the speculative indecision. 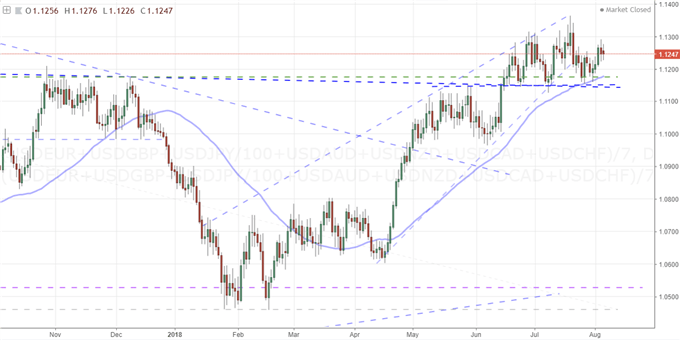 Amongst other majors, there was some remarkable volatility this past week and tentative potential for the period ahead; but the capacity to break the gravity of market-wide congestion is unlikely for most currencies barring an economic surprise. While EURUSD moved towards the bottom of its range (towards 1.15), the currency itself has slide across the board with an equally-weighted index looking more like a market pitching lower into a fledgling bear trend. As heavy as the chart may look though, there is little beyond Italian stabilizing moves and a few pieces of event risk ahead (Eurozone investor sentiment and the ECB's bulletin) that can catalyze trend. The speculative look for the Pound is even more intense with the Sterling's equal index dropping below the range established over the past 50 trading days, yet the break follows a BoE hike and won't find serious scheduled event risk until next Friday's combination of 2Q GDP, trade, industrial production and construction activity. Meanwhile, the Australian and New Zealand dollars lack the speculative incitement; but they are each discounted carry currencies awaiting monetary policy updates - from the Reserve Bank of Australia (RBA) and Reserve Bank of New Zealand (RBNZ) respectively. Technical potential is in abundance over the coming week, but there are few points of genuine ignition. We discuss all of this and more in this weekend Trading Video.