Sign up for the live webinar coverage of the US NFPs report on the DailyFX Webinar Calendar page.

Risk Trends Advance In US Equities but Is It Systemic?

There was a tangible boost to risk trends through the New York trading hours this past session. It wasn't difficult to find a lightning rod for speculative enthusiasm. The financial headlines were dominated by a historical milestone set by speculative-favorite Apple shares. Extending the recent rally triggered by the company's robust quarterly earnings Tuesday's after the close, AAPL shares advanced further into record high territory. What was truly unique about this particular record however was the fact that its market capitalization crossed $1 trillion - the first publically-traded company to hit that milestone. Just as news of a strong GDP reading, a remarkable inflow into a favorite asset class or a rate hike based on economic optimism carries with it material speculative heft; this headline caters to a latent optimism in the market. The FANG and Nasdaq clearly showed the confidence was infectious. The broader S&P 500 would also post a strong rally that it wouldn't be a stretch to attribute to this news. Yet, the blue-chip Dow presented more struggle. Meanwhile, other risk-sensitive assets (emerging markets, junk bonds, carry) were showing little of the lift. And, if this was a systemic risk appetite, it would only have started in the afternoon hours of US trade as the European indices suffered sharp declines Thursday. Headlines can rouse speculative response - bullish or bearish - but it doesn't absolve deeper and longer-lasting themes. With trade wars freshly escalated, it is worth keeping a degree of skepticism over a renewed commitment to a market-wide bull trend.

The leveraged influence from headlines will be a theme we revisit once again on Friday. Though there is a range of global macro event risk on tap, the monthly (July) NFPs will certainly command more attention that the other scheduled updates. The employment report is a good baseline for growth expectations; but if we want to evaluate its capacity to move the dollar and US capital markets, need to objectively assess its value to the broader market. As a growth metric, the payrolls, unemployment and wages data is certainly important; however all of the trends have shown years of improvement. An extension would do little beyond confirm priced-in speculation while a miss will struggle to stoke fear in the backdrop of years-long growth. For the Greenback, this series matters most as a key component for setting Fed rate policy. Yet, the same underlying trend factor applies and the group's transparency significantly undermines the dependency on this data. This favorite event risk will certainly earn attention - and thereby volatility - but it would presumptuous to assume a trend. We should consider that when we look at the provocative charts for the dollar. The trade-weighted DXY and equally-weighted dollar index rallied this past session, to close in on a much larger resistance. The same is true of EURUSD as it faces down 1.1500. Yet, securing a crucial, trend-setting bullish break on this spark before the weekend is a low probability affair. And pursuing low probability scenarios is a poor trading strategy. 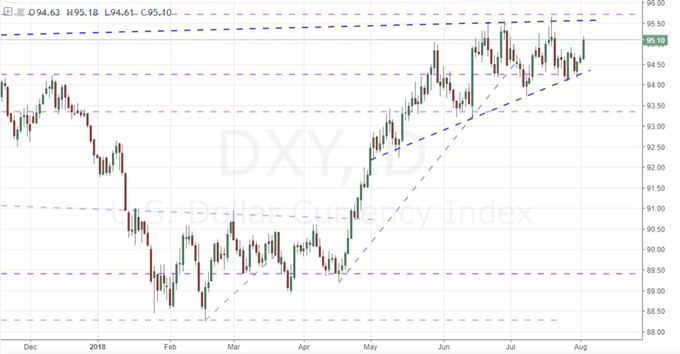 Fundamentals don't seem to earn the same kind of market reaction they used to - or at least that we have come to assume through market truisms and textbooks. This past session, the highlight was the Bank of England rate decision. Anticipation was high for this monetary policy group's meeting as speculation had assumed near-certainty (over 90 percent probability) that the MPC would lift the benchmark rate 25 basis point. Ultimately, the UK central bank would do just that. And, defying convention, the Sterling responded with universal retreat. There are caveats to this update, certainly. The market had positioned for a hike and speculative interest was thereby more heavily skewed towards forecasts. The BoE still worried by Brexit and trade wars seemed to treat this as a move in a very slow series of rate hikes - Governor Carney latter suggested that one hike per year was 'more or less' reasonable to expect. On the other hand, this hike still puts the BoE and pound in a rarified fundamental position as few others major central banks are even considering rate hikes. Yet, in a market where hikes move us from (sometimes literal) 'zero' to 'near-zero' returns; this is appealing only when there is an exceptional momentum behind risk appetite. That said, the slip after the news that resulted is just as unlikely to turn a trend as a rally would have been following the hike. Take a look at pairs like the EURGBP, GBPAUD and GBPNZD; but think in terms of congestion rather than trend. 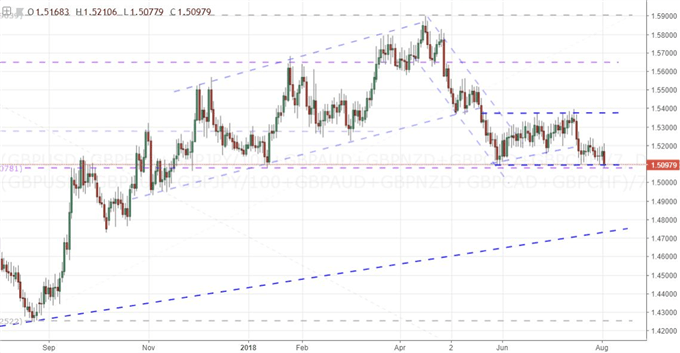 The dollar and Sterling weren't the only currencies of interest this past session - and worthy of attention moving forward. There are other benchmarks that have shown remarkable volatility or are otherwise in the line of fire for scheduled event risk. Yet, with these, tame fundamentals or the absence of them altogether sets expectations at more reasonable levels. The Euro for example saw a broad slide this past session despite a lack of material headlines or data. We would certainly not expect this to evolve into a systemic trend unless EURUSD was unexpectedly torpedoed. There was little to prompt the Canadian dollar to recovery, but it was strong enough to offset the Greenback's move. An equally-weighted CAD index offers cue of a technical breakout. At least the Australian dollar had a fundamental spark in its trade balance, but a surplus double forecasts doesn't match the currency's retreat. When we consider conditions over concentrated technical focus, we set more realistic expectations for trade opportunity. Compare that to gold. The precious metal extended its tumble to its lowest point since March 2017. This may in part be due to the dollar's advance, but gold has slid versus all the majors. Long-term, the fundamental conditions are poised to support the metal should volatility be added back to the mix - especially after this significant discount - but patience is as critical to trading as direction. We discuss all of this and more in today's Trading Video. 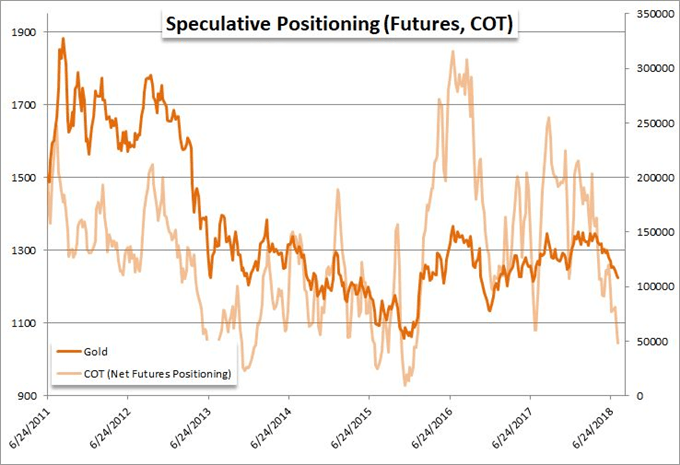