Apple's Shares Rally but the Enthusiasm Doesn't Spread Much Further

Apple's robust earnings Tuesday evening gave markets a reason for hope. If the world's largest publically-traded corporation (closing in on $1 trillion market cap) is still beating forecasts, perhaps it can recharge complacency - single-handedly spurring genuine risk appetite is unrealistic. AAPL shares did open the past session with an impressive 4.6 percent gap higher (the largest since August 2, 2017) and its near 6 percent advanced on the day was the strongest climb in 18 months with the added benefit of a record high. There is little doubt that this earnings season highlight offered a strong base for its own ticker. Yet, the growing reserve in broader sentiment didn't seem to find much relief from the headlines. The FAANG (FANG plus Apple) steadied and put in for a modest advance but didn't recovery from the past week's stumble. The broader-based and blue-chip benchmarks of the S&P 500 and Dow closed lower on the day. Further, global indices, emerging market assets and carry trade were all posting modest losses on the day. If there is to be a recovery in speculative appetite - whether systemic of opportunistic - it will have to come from some other source. 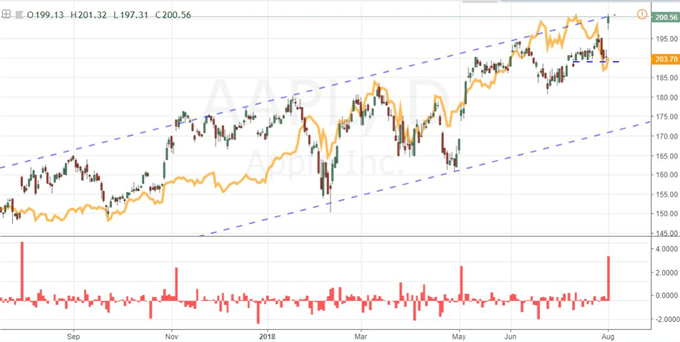 Trade Wars Return to the Headlines with Another US-China Escalation

As we await the spark that can re-ignite the market's enthusiasm, familiar troubles are returning to threaten the little stability we have managed to find of late. Trade wars returned to the top headlines this past session first through rumors and then through official announcement. Senior US officials announced that President Trump had instructed US Trade Representative to consider an increase to the rate in the pending $200 billion tariff case from 10 percent to 25 percent. The period for public commentary (opportunity for effected groups to lobby for change) was extended to early September, but seems intent and capacity to pursue this massive increase in import taxes. The immediate response to this news was stoic. We are already seeing the slow implementation of the previous $50 billion duty and it still isn't clear to global investors that this path will lead to a global reduction in growth - in an environment where more market participants are questioning this commitment to such expensive exposure. With the expected immediate warning of retaliation from China, the stage has been set. Will markets respond to this as an economic and financial threat or will it instead act as an accelerant for another catalyst? Traders should be mindful of all 'risk' assets; but pay special attention to USDCNH, the local equity indices (such as the Shanghai Composite) and foreign-based assets used to gain exposure (like FXI).

The FOMC Hold Generates Little Dollar Response, On to the NFPs

Through this past session, the Dollar was presented with an opportunity to stir fundamental interest - if not price action. The Fed rate decision followed the exact script the market had assumed. That is the success of the central bank - not in its actual policy path, but rather effectively neutralizing speculative surprise. As the 99 percent probability via swaps and Fed Fund futures had assumed, the central bank held its benchmark lending rate unchanged at the current range of 1.75 and 2.00 percent. Further, the language of the accompanying statement did little to alter the probability that it still intends to pursue further rate hikes later in the year. Swaps set the chances of a September hike at more than 80 percent and anticipation of two more rate hikes before year's end (for a total of four) is higher than a 60 percent chance. Personally, I think this is a very presumptuous pace amid trade wars, stalling speculative market benchmarks and concerns over the pace of growth; but the market doesn't have to reconcile these troubles until forced to do so. The dollar's response to the in-line Fed decision was non-descript. And, unless risk trends or the blowback from trade wars become key topics, there is little on the docket to charge volatility until Friday's NFPs - and even that lacks potential. In these conditions, shorter-term and congestion-oriented trades are better options. 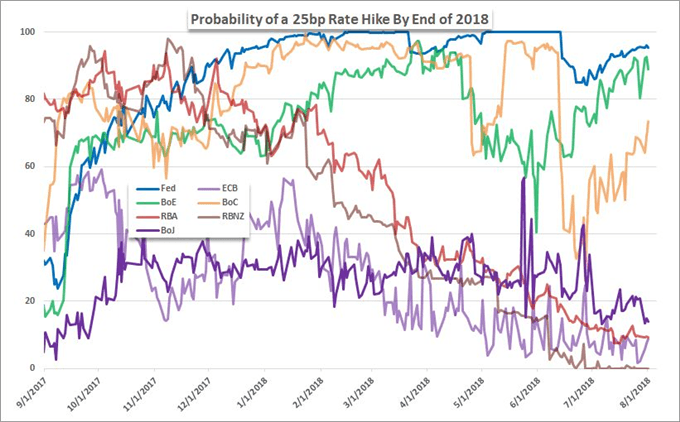 As we look forward for opportunity amid volatility, the top event risk through the forthcoming session is clear. The BoE rate decision is the exact opposite of the Fed's own policy event. According to the markets, there is an approximate 90 percent probability that the group hikes rates 25 basis points. We may have grown cynical about what a rate hike means in these markets owing to the Fed's 'gradual' pace, but it is still sufficiently rare that a major central bank would lift its benchmark rate or take any other move towards normalizing. Furthermore, this particular meeting is one in which a Quarterly Inflation report will be released to help guide speculation for subsequent policy shifts out into the future. There is plenty to excite Sterling and local asset traders in this event, but that does not guarantee a clear trend from the Pound. The anticipation of a hike is well established and likely priced. Further, it is unlikely to start a run of hikes like the Fed that can offer more systemic momentum. Most important of all, there is greater weight and open-ended risk in the uncertainty of the Brexit than there is in the limited capacity of interest rates. This means we can readily expect Sterling volatility, but be mindful of anticipating unrealistic trends. In general, markets and trades with a distinctive range quality - ideally set for the approach - are still the best options to explore and pursue. We discuss all of this and more in today's Trading Video.