A Troubling Start to the Week for FANG, Global Markets Head into Heavy Event Risk

How should we position for the Fed, BoJ and BoE rate decisions? Is there a technical setup that you'd like confirmed? Need help in establishing a strategy? Bring your trading, market and strategy questions to the weekly Trading Q&A webinar at 20:00 GMT Tuesday and get an answer.

It has been more often the case these past months that headlines have trumpeted problems for risk assets and its leaders with reserved market response from the assets in question themselves. That said, the tables may have turned with the most potent symbols of speculative appetite. There were some noteworthy global-macro headlines to digest to start this new trading week, but clearly it wasn't systemic enough to register a systemic shift in 'risk' positioning. Speculative assets from emerging markets to carry to the dollar offered up mixed but reserved performance. There was a notable underperformance for the top performing markets benchmarks over the past years. Tracing performance across sessions, Asian equity markets were mixed Monday led by a moderate decline from the Nikkei 225 while the European indices showed little more clarity or intensity. However, selling pressure started to build traction noticeably in US trade not long after liquidity filled out. What's more, the retreat was more significant technically and comparatively more aggressive in the hallowed FANG. The market-cap tech giants extended last week's retreat to secure an unmistakable and uncommon bearish technical break for the group. If the pull of sentiment has already shifted lower, it can amplify the fundamental impact of troubling event risk (like consumer confidence or NFPs) or vague but troubling themes (such as the normalization of monetary policy). It will be telling to see how the market response to Amazon's earnings when liquidity returns following its post-close release Tuesday.

Fundamentals are a hierarchy. Markets determine what matters most to the greatest range of market participants and follows the rise or fall of that theme. Presently, the dollar is having to sort through many competing fundamental influences to establish what carries the greatest weight for the currency's future. The global pursuit of trade wars may ultimately prove the most systemic as the risk of a global rebuff builds in equal proportion to the pressure the Trump administration is applying. It has been reported that deputy ministers for the EU, Japan, Canada, South Korea and Mexico are meeting in Geneva Tuesday to discuss the response to the auto tariffs threatened by the US; but the uncertainty is open without a definitive time frame. Another more timely risk on the Dollar's shoulders was the fresh threat of another government shutdown by the President over the weekend should he not receive funding for border security. Previous shutdowns in 2018 and 2013 rendered questionable results for the Greenback (and risk trends), so it is easy for the market to ignore them for now. The same reticence will likely be applied to otherwise important event risk on the docket for the forthcoming session. The Conference Board's consumer sentiment survey is important for gauging trade wars and growth evaluations while the PCE deflator is the Fed's preferred inflation indicator. Yet, with anticipation for Wednesday's FOMC decision and the general uncertainty with what trend dictating the dollar's course, the market will not register a clear move without conviction. 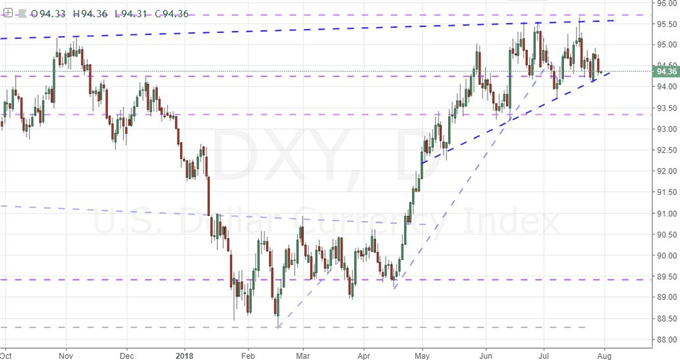 Heavy Event Risk Between the Euro and Yen

Looking out over the heavy event risk run that begins over the next 24 hours, there are definitely points of concentration. The Japanese Yen has a very dense docket from consumer inflation to industrial production to consumer confidence. That said, the most remarkable scheduled release through Tuesday's session will be the Bank of Japan's (BoJ) rate decision. The group is almost certain to leave its benchmark rate unchanged along with its target for the 10-year JGB yield. However, reports last week suggesting the group is considering altering its program in order to make it 'more sustainable' has leveraged the markets interest in this monetary policy decision. While 10-year yields have certainly responded to this speculation - leading the BoJ open unlimited purchases of the 5-10 year debt three times in the past week - the Yen has remained relatively aloof. That said, if the group does legitimate change course (even if modestly) the Yen would rally. Alternatively, they can do little to take a more dovish turn and thereby spur a speculative recovery. From the Euro, the slide in consumer confidence this past session was a reflection of growing trouble for the region. Ahead, we will see how system those issues run. The Euro-area 2Q GDP update is due alongside the jobless rate and consumer inflation report (ECB fodder). These are economically and fundamentally important readings, but their market moving capacity is up for debate. I would not presume a robust EURUSD break on this run - much less a trend. 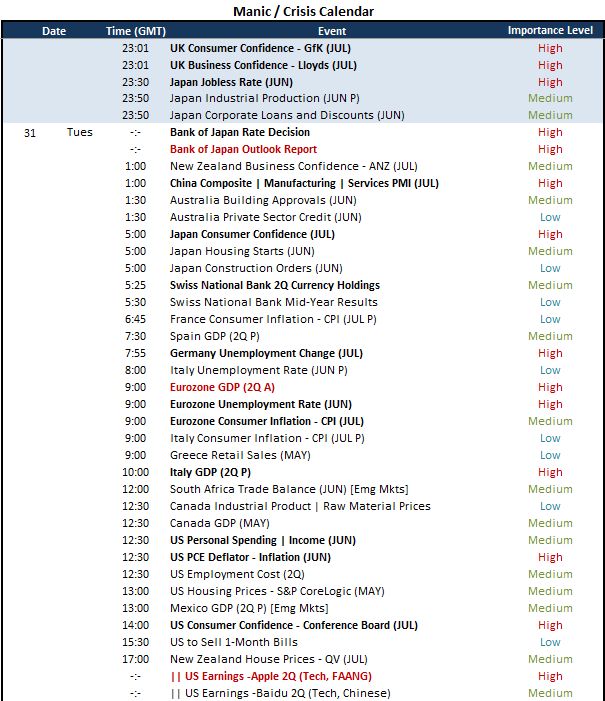 There is plenty to guide - or distract - traders over the coming session, but we should not forget the systemic though less driven event risk that can swiftly take up the reins of sentiment-at-large. Trade wars remains one of the most wide-ranging threats to global growth and financial stability across the system, but we don't have the benefit of a definitive event for which we can track the next milestone as with the Trump-Juncker meeting or metals tariffs deadlines. That said, we know there is considerable will for the US President to push forward with his agenda. In particular, his interest in putting pressure on China is clear. The threat of a $200 billion tariff on Chinese good or the more recent threat of taxes on all of the country's imports (equivalent of over $500 billion in goods) still hangs in the air with no clear date for relief or acceleration. In the meantime, the Shanghai Composite has returned to the 'neckline' of its inverse head-and-shoulders pattern while the USDCNY is registering its fastest climb - measured in the disparity between spot and the 200-day moving average - in a quarter-of-a-century. While it may not be the highlight now, it is important not to lose track of these dominant fundamental themes. We discuss all of this and more in today's trading Video. 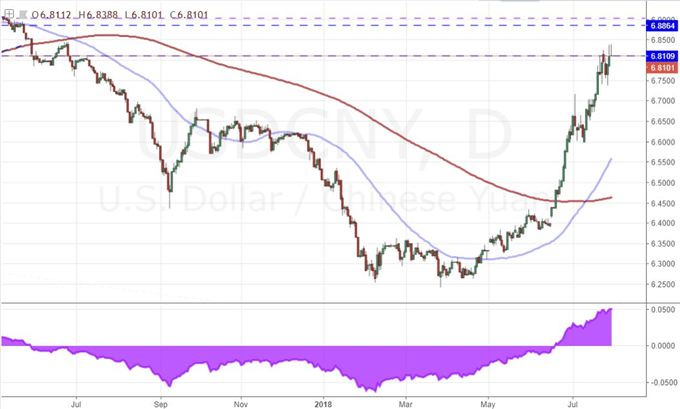