It is difficult nowadays to earnestly judge how much influence key fundamental themes are having on the markets. Trade wars is arguably the most systemically important matter for global financial markets - and the economy - but the threat its steady expansion poses has not translated into a consistent slide in speculative assets. It is that lack of consistency which should call into question the seemingly daily headline reversals that suggest 'markets fall due to trade war fears' and 'markets rise as trade war fears ease'. There is perhaps a kernel of truth to these assessments, but it doesn't amount to a useful signal for a developing trend. As for the progress of trade wars themselves, the plot certainly thickened. Following US Commerce Secretary Ross's remarks that they were still investigating auto tariffs, the EU trade minister announced they were preparing a list for retaliation should the US move forward with this next round. Meanwhile, speaking to the deepening division between the US and the rest of the world, the EU and Japan announced a bilateral trade agreement to counteract the US threat while the EU and China vowed to fight off protectionism. Risk trends did drop broadly Thursday (US and global equities, emerging market, junk assets, carry trade), but follow through will likely require more robust motivation if it is to continue heading into the weekend fade.

The international moves by the United States' trade partners to reduce the impact of the country's aggressive policies - largely by creating new paths to circumvent the US - represents slow progress on a long-term risk for the Dollar. The economic blow back, tempered foreign investment and reduction in reserves held in the benchmark currency are systemic and permanent risks. They are also less and less abstract as market participants are forced to trace scenarios out to ultimate conclusions. However, the markets are still not ready to base forecasts on longer term forecasts. That said, the Dollar was also faced with fundamental charge from the exact opposite end of the development spectrum. In contrast to the slow build of trade wars' influence over the currency, US President Donald Trump's off the cuff remarks this past session were unambiguous but not necessarily loaded for a course of steady escalation. The lightning rod for controversy changed his focus in an interview in which he said that he 'wasn't thrilled' about the Fed's rate hikes as the higher financing costs and currency made the country uncompetitive and could undo the efforts his administration had put in. The White House quickly moved to clarify that the President wasn't questioning the Fed's independence or policy course, but the world has increasingly taken to evaluating his statements original context and at face value. The Dollar dropped immediately after the remarks - helping my USDJPY short - but it would recover much of that lost ground through the end of the day.

As the Dollar struggles to determine its convictions with the trade-weighted DXY and my equally-weighted index inching towards multi-month highs, there is less struggle for bearing for the British pound and Chinese yuan (renminbi). The Cable continued to dive through Thursday with little registered effect from the Greenback's mid-session swoon. Where some may account for this key pair's progress to the Dollar's slow climb, a look around at the other Pound crosses and to an equally-weighted index of the currency can see the recent pressure is more innate. The currency itself is still smoldering from its weekly tumble in the face of growing fears over the Brexit forecast. The question is whether it stabilizes again until the next clear point of progression - whether bullish or bearish? For the likes of EURGBP, a critical technical break was made with this past session's move; but these are not markets that readily commit to follow through. The most prominent exception to the global rule is the Chinese currency. The yuan took another painful slide lower extending the most aggressive five-week USDCNY (as the offshore renminbi has not been around that long) in 24 years. If anything, trade war headlines still exert influence here. What investors the world over should really consider is whether there is any sign of instability in this capital outflow. 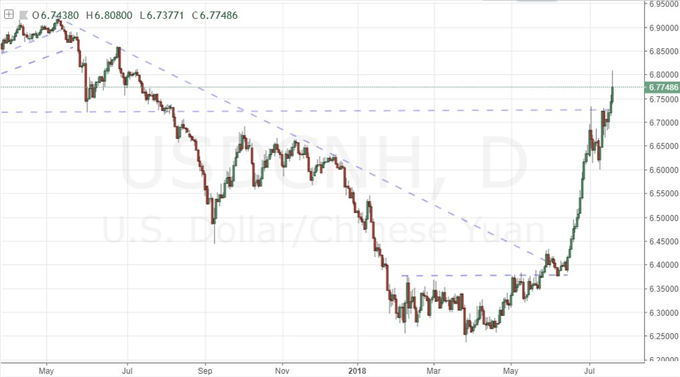 The Extent of Fundamentals for the Aussie Dollar, Loonie and Oil

It is my general assumption that these are markets that simply cannot gain a serious head of steam - whether for individual regions, asset classes or in systemic themes like risk trends. There is a conflict between complacency which has rewarded investors for years with passive momentum and tepid yield against a growing din of fear over the health of the economy and markets through the months and years ahead. A 10 year cycle is a long time to cloud memories for how painful a systemic unwinding of risky exposure can be. It is with this backdrop that we have to evaluate what fundamental cues can reasonable overcome the higher gravity and which are destined for mere short-term volatility impact. This past session, the Australian dollar's optimism following the robust employment figures wouldn't leave the currency with even moderate gains through the end of Thursday's session. I would apply these same expectations to the Canadian dollar Friday as it takes in the recent inflation figures - even with the BoC standing as the second most hawkish central bank among the majors. Oil is perhaps the most recognizable example of fundamental restriction. Headlines about supply and demand, long-term growth considerations and more simply cannot maintain a clear course setting for this market - and it isn't likely the picture changes this dramatically and consistently. It is this style of market activity we should anticipate until clear evidence of conviction is clear. We discuss this and more in today's Trading Video.