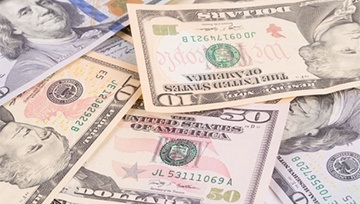 Will Dollar and Nasdaq Remain Steady Under Trump and Netflix Headlines?

Systemic Headlines to Start the Week with Fear and Doubt

This new trading week started off to a deluge of headlines covering a range of top fundamental concerns. As has been the case often lately, the most coverage was dedicated to US President Donald Trump. His scheduled summit with Russian President Vladimir Putin proved just as headline-worthy as was expected. Following his contentious meeting with NATO and the G-7 before that, Trump voiced a strong message of support for the country that many western powers have decried for wrongs from the annexation of Crimea to interference in US elections. It is easy to get wrapped up in the politics of such situations, so traders should consider the tangible economic and financial implications from such events. This puts the US further at odds to its global peers and thereby threatens global growth and investment. That is especially true with other headlines such as the US President naming the EU one of its 'biggest foes', China filing a WTO complaint over the threat of a fresh $200 billion tariff made by the US and further concerns over the outlook for growth. Ratings agency Moody's warned the outlook for volatility was a dangerous one amid trade wars while the IMF issued both warnings and downgrades to its growth forecasts (from April) owing to the same threat.

Despite the voluminous headlines and their collective tone, risk markets showed little tangible concern through Monday's session. Regardless of what asset class or region you looked to, those various nodes of 'risk' showed little sign of meaningful concern in yet another salvo of global concern. Emerging markets offered a gap but minimal follow through despite the additional implication of China's 'disappointing' GDP and monthly June figures. Junk bond and carry trade - assets sought purely for the return - dipped on the open but didn't hint at any conviction to a true reversal. And, global equities were largely non-committal on the tail end of the recent bullish charge. That said, the technical picture for the likes of the S&P 500, Dow and Nasdaq looks like the zenith of a projectile that is starting to plateau with gravity. A somewhat 'mundane' spark will test the market's intent Tuesday when the New York markets open following the after-hours disappointment from Netflix earnings. This high profile FAANG member posted a substantial enough disappointment to send NFLX shares tumbling 13 percent in post-market trade. If this key member of the tech concentration undermines broad markets from its leader position, it would be a remarkable swap of influence from trade wars. 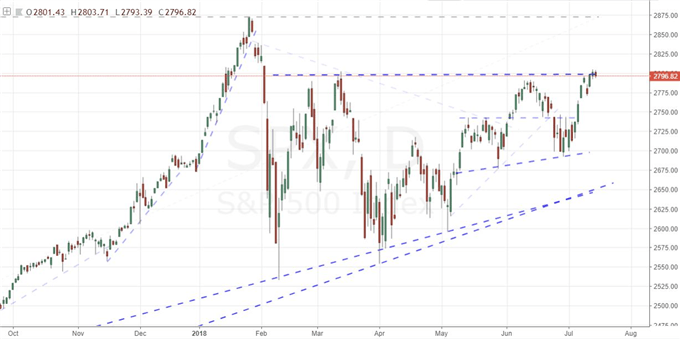 The Dollar Should be Top Focus Tuesday

Another market that was remarkably steadfast this past session despite the circumstances was the US Dollar. The same trade war headlines and the growing risk of a global reprisal for the United States' moving against its allies pose serious risk for its own markets and currency; but we have yet to see much fear processed in price action. From the Dollar, we did see a modest retreat from the trade-weighted DXY and equally-weighted indices. The former is moving to complete a 'right shoulder' on a head-and-shoulders pattern which will test the same restraint on full momentum market activity that has stymied so many other appealing setups. Ahead, though, we will see the event risk truly concentrate on the Greenback and US developments. Fed Chairman Jerome Powell is due to testify before the Senate. And, while his own points will reflect closely what was issued in the official statement released last week from the central bank, market participants know he will be grilled heavily on the economic implications of trade wars. He will certainly reflect that they bode poorly for the economy and markets which can in turn call into question the hawkish outlook for rates as well as further deepen concern over the general state of stability moving further. Keep an eye on the Dollar's connection to general 'risk' through this update.

A Word for the Pound, Euro, Kiwi and Oil

While it can be difficult to register any other developments given the universal dominance of issues like trade wars, it is worth keeping a heads up for other 'catalysts' - whether they have hope of determining a clear bearing on risk trends or not. The Pound had plenty on its mind this past session. Carrying through the past week's back and forth in the assessment of Brexit, Prime Minister May had to face another resignation (the ninth) as she accepted four amendments to her white paper on the procedure for the UK's side of the divorce from the 'hard Brexit' crowd. This will remain an issue through the upcoming jobs and inflation figures out of the UK. For the Euro, the buried headline were reports that the head of the German branch of the ECB (Weidmann) voiced concern about what the future held for Europe's largest economy and the need for politicians to take up a crisis fight should it arise due to the ECB's limited capacity. From the Kiwi, 2Q inflation picked up but fell short of expectations. The Kiwi's primary reason to mingle among the majors is its capacity - or lack-there-of - as a carry currency. Finally, oil extended last week's dive Monday as the US Treasury suggested importers may be able to circumvent Iranian sanctions to help soften prices - though this natural seems to support markets when too often fundamentals have been ignored. We discuss all of this and more in today's Trading Video.