EURUSD, Dow, Oil Will Start New Week with Ranges and a Fear of Trade Wars

Trade Wars: A Slow Killer Rather than a Swift One

We head into yet another weekend with trade war pressures at their peak. It may seem from the move to stabilize the range of risk assets late this past week that backdrop for the global economy and/or financial system had improved, but it certainly has not. The most favorable assessment of conditions this past week was that we didn't register any new tariffs from the United States on its peers or retaliatory moves in the opposite direction. That said, the last updates we've seen on this front were the United States' new $200 billion import bill on Chinese goods, the threat of a 20 percent tariff on European autos (with the $300 billion retaliation threat) and Canada's 12.6 billion retaliation against the US for its metals' duty. We may not have raised the ante even further, but the pot can already break the bank. Meanwhile, the NATO summit has only further burned political bridges that makes walking back economic troubles that much more difficult. As measures of sentiment (consumer, business, investor) and growth continue to come in, we will see the inevitable, negative impact of these conflicts show through. And, eventually the speculative lift carrying the market - complacency, moral hazard, fear of missing out - will succumb to gravity. Until that time, traders should remain flexible and pursue short-term opportunities. 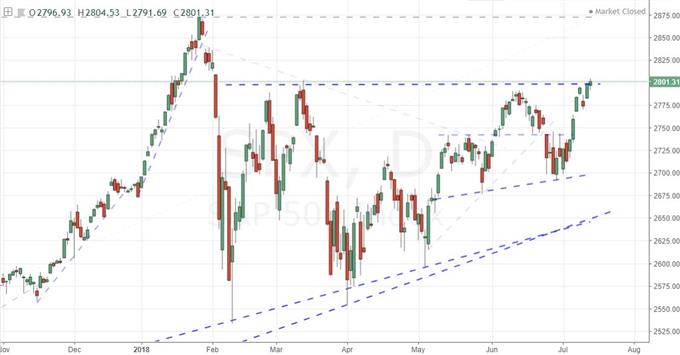 A Dollar Head & Shoulders and Question of Theme

If the general state of the financial system is one where commitment is broadly elusive, the Dollar will find little capacity to blaze is own path. There are a few fundamental themes that will be tapped this coming week, but the hierarchy of trade wars and risk trends remains a sticking point for this benchmark currency as much as any other asset. On the trade wars front, the US may seem better situated in the economic conflict as the instigator, but its ploy to fight it on so many fronts will invariably ensures it will face costly retaliation. Whether the many targets of Trump's tariffs decide to collectively penalize the country or they coincidently apply pressure by pursuing deals that circumvent the country (as with the Chinese-German deal this past week), the pain will be felt. That said, there are no scheduled events to stoke this theme; but we should keep a wary eye on headlines and Twitter nonetheless. As this concern hangs over traders' heads, we will see how much weight competing themes can sway. Monetary policy is a theme that will test its mettle this week with Fed Chair Jerome Powell's semi-annual testimony before the Senate. The Fed's monetary policy report this past week voiced confidence in growth, inflation and rates; but the concerns over trade wars and the practicalities of how monetary policy can surprise makes this a heavier potential for a bearish impact. 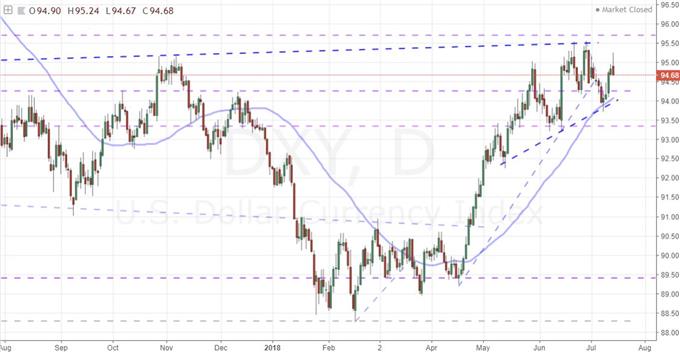 China's Health Under the Microscope While Data Draws Skepticism

In speculative markets, the tools used to measure changes in financial and economic health are often more influential in directing investors' actions than the eventual underlying changes themselves. There are exceptions to that rule of course, and China happens to be one of the biggest. Skepticism over the accuracy of the country's economic data runs deep, and for good reason - the authorities in the past made no effort to hide the fact that they were controlling the perception of the economy in order to promote growth and stability. Though the country has made a concerted effort to improve it transparency and access, the regular influence is hard to miss. Why are we weighing in on China's data, this past week had a round of important data to consider from this key trade war player. The June trade balance showed a sharp improvement on a sharp drop in imports growth versus exports. Meanwhile, new lending and aggregate financing shot higher - likely trying to patch holes in natural sources of expansion. Ahead, the data is even heftier out of China. At the top of the list is the 2Q GDP report. This figure is notoriously and suspiciously stable, so take its update through a period where trade wars just started to gain traction with a grain of salt. To support this big ticket figure, we will also take in foreign direct investment, fixed assets, retail sales, industrial production and the survey jobless rate. One thing is for sure: despite what the data suggests, China is not immune to the pain from trade wars. 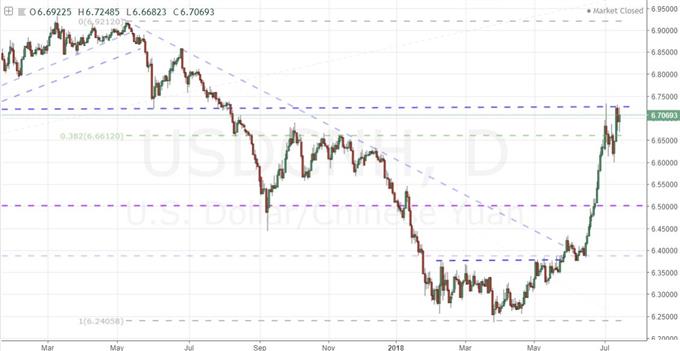 Market Movement and The Persistence of Range

There have been some impressive moves outside the top headline fodder recently, but the same fate befalls all of these volatility and event-driven players - they lose traction and stall. The Pound has been one of the most consistent secondary movers this past week, but a look at an equally-weighted GBP index shows the currency has actually gone nowhere for nearly two months. Exceptional swings in Brexit have left us with little material conviction to speak of. Ahead, the UK labour and inflation statistics are unlikely to earn more than a sharp, short-term impact. In comparison to the disappointment behind a motivated Pound, the Swiss franc and Australian dollar have posted remarkable moves without tangible event risk. Both currency have steadied after a jolt of volatility in the latter half of this past week. I am dubious of the franc taking to to its haven role (for better or worse) while the Aussie will find less play in jobs data than usual. In commodities, there is even greater activity of late; but here too the commitment to trend should be questioned. For the likes of soybeans where Chinese tariffs are biting US farmers, the drive has a source. For crude oil and gold which have tentatively held and retreated from their respective extremes; a major reversal is as difficult to facilitate as follow through. We discuss all of this and more in this weekend Trading Video. 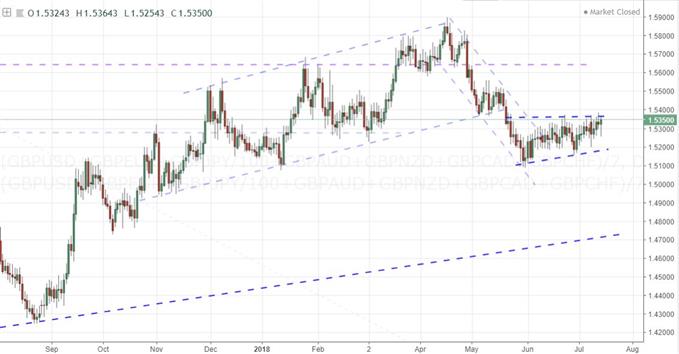