Financial markets stability and economic growth forecasts face an increasingly troubled outlook, but you wouldn't gather that impression from the favorite speculative market benchmarks. This past session, the major US indices posted bullish gaps on the open which lead the S&P 500 to its highest close since February 1 (just before the volatility explosion) and the Nasdaq to a record high. The scale of this performance and the historical milestones were not common across the board, but the general sense of optimism seemed pretty consistent. From global indices (like the DAX, FTSE 100 and Nikkei 225), emerging markets, junk bonds, speculative-favorite treasury assets, carry trade and more; there was a broad field of green. What makes this performance remarkable is that it runs counter to the persistent worries that trouble investors and the financial media. The second day of hte NATO summit closed without US President Donald Trump reversing his criticism nor materially easing his demands of treaty members to leverage their contribution (with a veiled 'or else' they US would pull out). As for trade wars, the newly threatened $200 billion in tariffs threatened against China and the previously floated 20 percent tax on imported European autos are still hanging in the air, threatening growth. 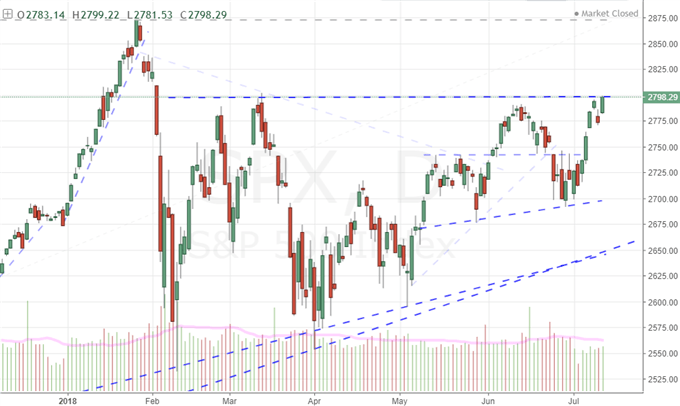 Where market participants continue to acknowledge escalating financial risks, the systemic troubles nevertheless continue to build. On the financial side, dependency on debt and central bank generosity continues to rise at a steady clip. Meanwhile, the outlook for economic activity is flagging alongside hopes for trade. Appreciation for fading growth may be starting to show through however in commodities. Broad raw material indices like the Dow Jones UBS Commodity Index posted one of its worst days in years this past session. We find individual resources from crude oil to copper to wheat and cotton have all swooned recently. While crude may readily defy the day-to-day and week-to-week updates to the supply-demand balance, this broader asset class is dependent on a broad strength in the global economy to stoke to demand. How long can the outlook for growth slide before the tangible losses prove too great to overlook? Don't wait for an unexpected catalyst to determine this tipping point. It would be wise to reduce trade time frames, lower total exposure levels and be more selective of positions in anticipation of the inevitable. 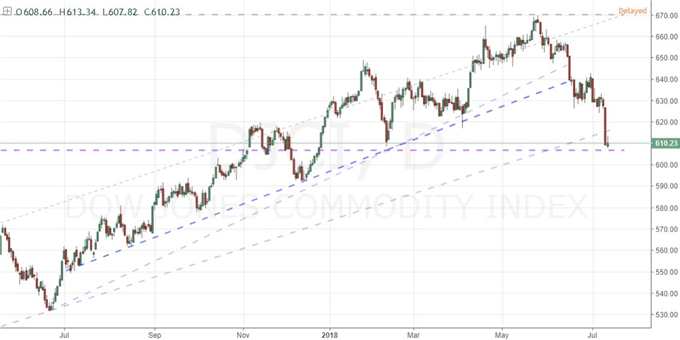 Wednesday’s dramatic Dollar rally was difficult to miss. The charge showed through the trade-weighted DXY, equally-weighted Dollar indices and the run of major USD-based crosses. Where was that enthusiasm this past session though? Having just forged a critical turn via EURUSD and bullish breakout through USDJPY, conviction seemed to evaporate completely this past session. While the benchmark currency earned a technical advance through the session, there was no material progress to be made. With the United States increasingly putting itself at odds with its global trade partners while the risk of a collective retaliation is still only a loose threat, it is as difficult to rouse conviction - bullish or bearish - behind the benchmark currency as it is for the global indices. Perhaps the University of Michigan sentiment survey will show a shift in confidence among consumers next week. Meanwhile, there are less ambiguous fundamental catalysts that can spur volatility under the currency. Monetary policy already represents a considerable fundamental advantage for the Greenback and the six-year high from the US CPI reading this past session has really put that benefit to the test. Ahead, the Fed will deliver its monetary policy report to Congress with Chairman Powell due to field questions next week. 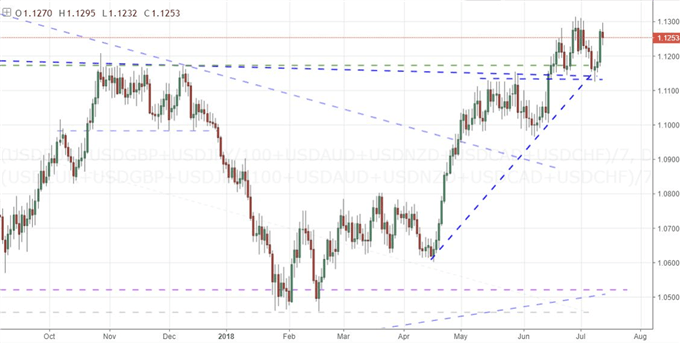 Where Fundamentals Fail Euro and Pound for Volatility, the Franc Tumbles Without Catalyst

The Dollar isn't the only currency with the inability to convert fundamental event risk into meaningful price action. The Euro this past session absorbed the minutes from the controversial, last ECB monetary policy meeting. Despite speculation of a distant hike from this central bank earning the Euro an incredible rally through 2017, the actual discussion over whether to lift rates next July, in autumn or into early winter doesn't seem to register for traders like it once did. The same disinterest has settled over the Pound. Despite Brexit updates leading to sharp Sterling moves multiple times these past weeks, the release of a 'soft Brexit' leaning white paper seemed to pass unnoticed by the markets. Perhaps the markets have driven the speculative pendulum too far to the extreme for these major currency such that only disappointment will register. It is this heavy event risk and subsequent restraint that made the Swiss franc's performance this past session all the more remarkable. Despite a lack of direct event risk or even a clear speculative response to trade wars, the Swiss franc suffered a particularly intense retreat Thursday. The move looks suspiciously like the start of a reversal, but currency will not defy the current laws of market gravity. We discuss all of this and more in today's Trading Video. 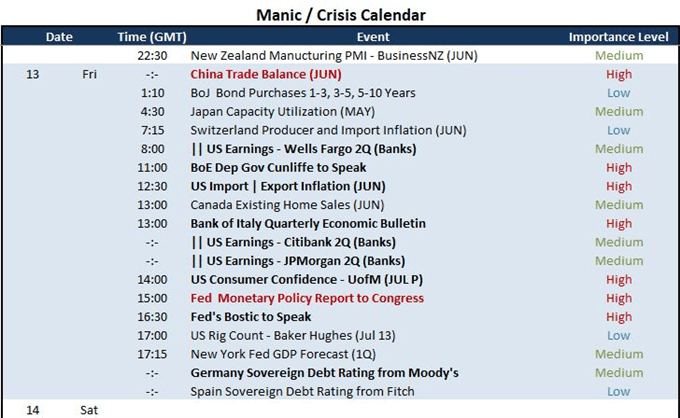