Just In Case We Missed the First Escalation on Trade Wars...

Anticipation among global traders heading into Thursday's session was concentrated on the start of the two-day NATO summit. The military treaty that has helped not only maintain peace but drawn countries closer together has been a clear target of criticism for the US President who sees the relationship in a similar light to trade: disproportionately funded by the United States. Yet, before we would even get to the tense rhetoric at this meeting of global leaders, the Trump administration decided to shake up global markets early in the Asia session Wednesday with the announcement of fresh round of 10 percent tariffs on approximately $200 billion in Chinese imports. It is increasingly difficult to maintain a confidence that this is a simple negotiation tactic that will be quickly reversed before irreparable damage is done - whether or not it produces a favorable outcome for the US. The sentiment following the first day of the NATO summit should reinforce that reality. Seemingly at-odds with all other members, President Trump responded with the typical aggressive charge. He tweeted that all countries party to the treaty should hit the spending target of 2 percent of their respective economies immediately and further suggested it should be 4 percent for all. 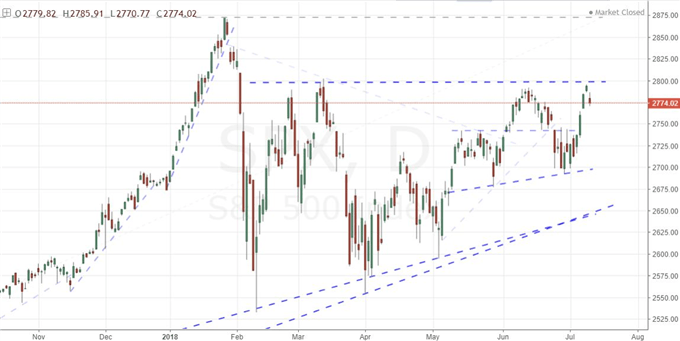 If You Intend to Ride the Dollar Bull, Be Clear on its Driver

Amid all the global headlines this past session, the best performing major currency was the US Dollar. Whether we refer to the heavily EURUSD-weighted DXY Index, an equally-weighted major of the majors or key pairs individually, they would all reflect the same broad strength for the Greenback. What makes this performance remarkable is the dubious nature of its fundamental backdrop. In other words, where was this enthusiasm coming from? Perhaps it was traditional monetary policy advantage? The factory-level PPI inflation indicator did hit its fastest pace of expansion in 11 years. Also, implied yields from the December Fed Funds futures contract is still holding remarkably buoyant. Yet, if this is the motivation, we still have to question why this theme is now conferring benefit to the currency when it left the USD to suffer through the past year and considering the general appetite for yield is under obvious pressure. Risk trends is wavering over time with a lack of bullish progress and lingering volatility. If these fears spread, the US yield backdrop has the most to lose. Perhaps it is a safe haven bid? That is a difficult theory to support considering the US increasingly considered the most at-risk for the pressure it is doling out and the threat of a unified retaliation by its trade partners. Further, we would expect to see similar strength to other safe havens - Yen, Swiss franc, gold - which has yet to truly show through. Unless you are convinced by a particular and reliable theme for Dollar strength, it is best to stick to short-term and range-oriented scenarios like those from EURUSD and USDCAD.

As expected, the Canadian Dollar would find the most straightforward volatility response to scheduled event risk this past session with the release of the Bank of Canada (BoC) rate decision. As was essentially fully priced in, the central bank hiked rates 25 basis points to 1.50 percent. This is arguably the second most hawkish major central bank next to only the Fed. Initially, the Loonie responded with rally as the policy authority maintained speculation of future hikes, but perhaps concern over a heavier impact from the trade wars deflated any lasting speculative ambition. The Canadian dollar lost all of its gains on the day before the close. In contrast, the Australian and New Zealand dollars suffered their own remarkable retreats without clear fundamental prompt; and that pain stuck. If this was a risk response for a floundering carry candidate, it wasn't evenly applied across the market. It could also be a spillover from China as both Australia and New Zealand count the second largest economy a critical export destination. A similar restraint for the Euro and Pound comes as less of a surprise owing to the abundance of key thematic risk these past months and the absence of critical update just these past 24 hours. There were no drama filled Brexit headlines Wednesday nor did we return focus to the US-EU trade war efforts with China still in the line of sight. Perhaps the second day of the NATO meet and the Eurozone finance ministers meet ahead will carry more weight.

If the Dollar's move was impressive, US crude oil's tumble Wednesday was exceptional. The commodity posted one of its largest single-day losses in months after it crashed through $72. What was remarkable was that this heady loss erupted despite news that US inventories posted their single largest weekly drawdown (nearly 13 million barrels) since September 2016. That is a supply pinch that would normally register a sharp increase in the price of the commodity if the traditional supply-demand model were told hold. We could perhaps say this still fit that mold because the outlook for demand via global growth was fading under troubled language among international relations, but we have seen this far too often from this market. In general, traditional fundamentals do not apply here. This is a market torn between practical economic factors and speculative confusion. It renders it more suitable for technicals and uncertainty than fundamentals and trends. In contrast, the motivations for gold are a little more straightforward. The precious metal took a dive that seemed to neatly mirror the rally from the US Dollar - its primary pricing instrument. It is true that it dropped against most major counterparts, but the outlook for risk trends, ineffectiveness of monetary policy and the threat to global financial conditions makes this commodity look like a notable fundamental discount. We discuss all of this and more in today's Trading Video. 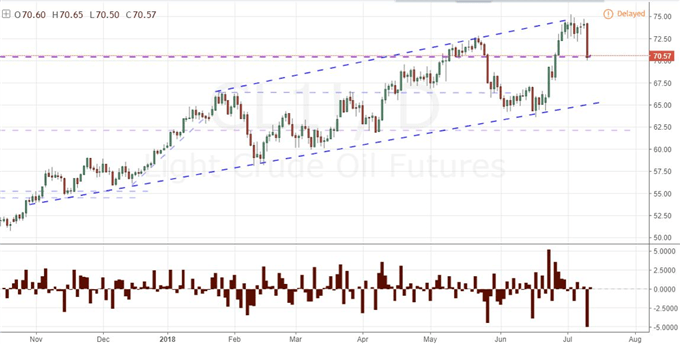