Risk Appetite Breaking Up on Entry

The speculative run that opened the week had its fundamental cracks but it was still broadly based and fairly robust. The extension forged through this past session was more overtly uneven as we head into another important global summit that would no doubt remind global markets of the growing schism in critical trade relations. Looking at the quality of 'risk trends' this past session, the S&P 500 seemed to lead the pack for enthusiasm with a fourth consecutive advance that was riding off of the momentum from its last week's late breakout. The scale of the gap and the day's full progress both notably cooled as we now stand at the range high of the past 5 months at 2,800. Looking at the development of sentiment through previous session, the restraint was more marked with European indices while some Asian benchmarks registered losses. The most remarkable miscue was from the Shanghai Composite. Though it did advance on the day; given its starting point from a deep selloff, a speculative rally with an ambivalence for trade wars should shine through this index. It did not. Further reflecting a lack of genuine enthusiasm rather than just a change in pace through sessions, the EEM emerging market and HYG junk bond ETFs were risk assets that both struggled through New York trade.

Through Tuesday's session, there were a few fundamental events that would remind us of the tenuous global state of trade. Switzerland became the eighth WTO member to lodge a formal complaint against the United States for its metals tariffs, further setting the world's largest economy at odds with its counterparts. Meanwhile, looking to establish alternative routes for growth and capital flow cut off by the United States' aggressive drive towards protectionism, the Germany's and China's leaders meet to discuss boosting direct trade relations and deliver a united rebuke against President Trump's policies. Ahead, both the animosity and unusual shift of unity against a single country will intensify. The NATO Summit will bring together countries that are already embroiled in the trade war, and President Trump has already signaled his stance going into the meeting when he tweeted that the EU is not paying its fair share of the costs. Given his response to criticism at previous multi-national summits and the increasingly unified position of his peers, this will not likely offer investors nor global citizens much optimism. On the sidelines, the German and French economy ministers are due to talk their position amid US tariffs while Japan's Abe is set to meet with the EU's Juncker and Tusk.

The Dollar and Euro

For the two most liquid currencies in the FX market, the outlook does not provide much in the way of clarity for decisive trends. Both have enough points of speculation to keep the bulls around, more than enough threats to trigger substantial losses and an abundance of unresolved fear to prevent a view from truly solidifying - whether measured against each other or individually. For the US Dollar, slide over the past week carries different signals for potential depending on which baseline you refer. The trade-weighted ICE Dollar Index (DXY) has cleared near-term support on a strong bull trend. The EURUSD itself however held to a month-long range. A wider representation of the Greenback in an equally-weighted index reflects a currency that has made no crucial breaks to threaten its multi-month bull trend...yet. That said, the persistent push by the US to set itself at odds to all major counterparts increases the risk that its counterparts will form a coalition to respond to the country and redirect global capital away from the world's largest economy. For the Euro's part, it is important to remember that its mere presence has raised the ire of both the United States (trade wars) and United Kingdom (Brexit). These are external pressures that add to the internal: the Euro-area ZEW investor sentiment survey for June reported the lowest level of confidence in six years while Italian officials reminded us of the political stability threat the country presents.

A Convoluted Pound Versus a Clear Canadian Dollar

If we wanted to reflect on the extremes of trading from a market burdened by so much fundamental uncertainty that it is rendered impotent to a clarity in a specific event with strong market impact and decisive outcome, there are few better bookends than the Pound and Canadian Dollar. For the Sterling, the political landscape is havoc. The situation was already a mess with Brexit standoffs between the government and Parliament, but it was made all the worse with the round of resignations from ministers this week in protest of the Brexit position the Prime Minister has taken. It completely overwhelmed the run of data which was included a monthly GDP update of 0.3 percent growth and a sharp drop in the trade deficit to 2.79 billion pounds. This situation finds little hope of clearing up in the foreseeable future, so we shouldn't assume a straightforward trading environment for the Pound. In contrast, we have the Canadian Dollar. While the currency - on an equally weighted basis - has turned to absolute congestion the past week, it has a catalyst ahead that can readily provide a clear good/bad outcome with a strong market impact. The Bank of Canada rate decision is carrying a heavy probability of a hike from the market (96 percent), so a disappointment or 'meets expectations' is easy to establish. We discuss all of this and more in today's Trading Video. 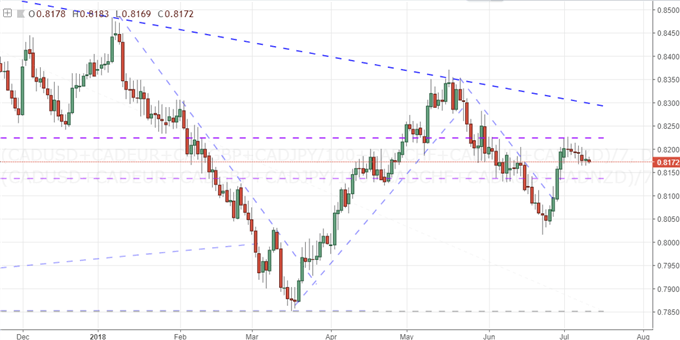