Do Trade Wars Truly Not Matter?

We weighed in on how serious the markets would treat trade wars last week when US, Chinese and risk-oriented markets seemed to defy the news that the United States and China had triggered $34 billion in import tariffs against each other last week. Where the markets were moderately green Friday, they seemed to charge forward to start off this new week. The benchmark US indices (S&P 500, Dow, Nasdaq) all gapped higher on the open while European and Asian shares registered advances of various intensity. Most remarkable in this asset class though was the Shanghai Composite's strongest single-day rally in over two years. And, just to ensure this was a defiance of general sentiment and not a unique attribute to equities; the same advance was found in emerging markets, junk bonds, yen crosses and risk-tinged commodities. So, again, we should evaluate for ourselves: do trade wars truly matter to investors and capital markets? In my opinion, absolutely. In previous years, decades and cycles; the markets have defaulted to complacency and moral hazard when confronted with difficult forecasts. Given how complex and absolutely comprehensive this to the norms that have been established this past decade, it should come as little surprise that those heavily invested would delay or hold out hope. It doesn't change the fact that the economic and financial impact will ultimately be felt.

As the saying has been adapted: "the markets can remain irrational longer than you remain solvent". After years of moral hazard, FOMO, yield chase, monetary policy dependency, etc; it is certainly within the market's capacity to keep its speculative balance. However, it is exceptionally risky to assume we can continue to produce meaningful gains given the overt economic and financial clouds we face. Assets are already exceptionally expensive and the risks too material to presume that there is acceptable risk-reward left in chasing a buy-and-hold strategy. However, that doesn't mean that we can't take advantage of temporary lapses in logic. The Dollar is a good example of this short-term / long-term disparity. Ultimately, a deepening of the global trade war will find the US increasingly the focus of trade counterparts' anger as it furthers the burden on their economies through trade. Yet, if the markets are willing to overlook the immediately risk implications, they certainly would be willing to ignore the 'deeper cut' threats to the Greenback's reserve status. I wouldn't want to seek out any lasting long-Dollar trades or set targets far off on the horizon, but range based moves for the likes of EUR/USD or USD/CAD with cross currency allowances are viable. That said, if the markets want to evaluate the situation more pessimistically (objectively), a Dollar tumble is better served through the likes of USDJPY or USDCHF. Consider the same factors when evaluating 'risk'. 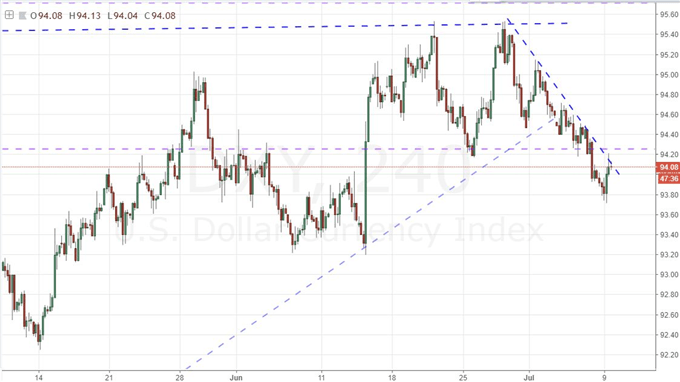 Through the end of last week, it seemed that the UK's divorce from the EU (Brexit) was on more stable ground. While the situation was still remarkably complex and the ultimate negotiations between the UK and EU were still on uneven ground, it seemed that at least Prime Minister Theresa May had a more solid mandate with which to approach the table. She had received a short-term bye from Parliament with the 'no deal' fears and her Cabinet Friday seemed to give support her 'soft Brexit' approach to the customs relationship. All the incremental optimism collapsed however to start this week. The rebels in her government apparently did not support the less aggressive separation terms she was proposing and a string of ministers announced their resignation Sunday into Monday: David David (Brexit Minister); Boris Johnson (Foreign Minister) Steve Baker. This now throws the stability of the UK government into question which obviously makes the path towards a 'clean' and prosperous compromise in this divorce that much more problematic. The Sterling has been anchored due to Brexit uncertainties for the past month-and-a-half. This development threatens to be outright bearish. And, that goes for the UK assets like the FTSE 100 - which seemed to rise with the Pound's retreat - as well.

It is easy to get wrapped up in the markets that are at direct risk from the active front of the trade war. However, this is not just a US-China engagement. This is a global risk whether the threat spills over from these two countries' direct relationship or certainly if the gravity of the situation starts to draw in more countries through targeted actions. From the Euro this past session, we heard the concern from the ECB. President Mario Draghi reiterated his warning that trade wars represented the greatest threat to growth and stability moving forward. It was Coeure's statement that fears of trade wars wouldn't stop the ECB normalizing and Nowotny's warning that trade wars can lead to currency wars made more detailed and certain risks of the global fallout. From the Canadian Dollar, we immediate technical appeal has to be considered against the anticipation of Wednesday's BoC rate decision. The speculation over monetary policy tightening must be weighed against the realities of growth risks in the aggressiveness of the central bank. Then there are the commodities. Gold's wobble in its tentative recovery obscures its appeal amid trade wars, risk stability concerns, Brexit issues and recognition that monetary policy has reached the end of its effectiveness but normalization is a fraught effort. The contrast is crude oil. Its consolidation at multi-year highs capped by trend channel resistance looks ripe for a fundamental catalyst. And yet, it has repeatedly defied traditional fundamentals. So perhaps it is one of the purely technical oriented markets of our times. We discuss all of this and more in today's Trading Video. 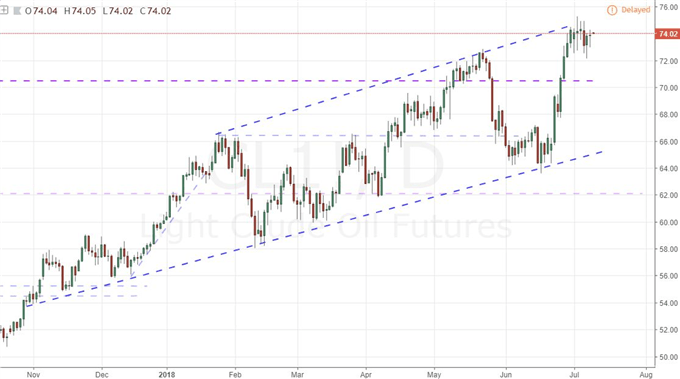 If you want to download my Manic-Crisis calendar, you can find the updated file here