What is Driving the Risk Trends?

It is a simple yet complicated question at the same time: what is driving risk trends? Theoretically, the markets are in a better position to mount a significant move should fear or conviction finally take the market. US traders are back online after the liquidity drain for the mid-week Independence Day market holiday. Well, it is at least open for trade. Turnover Thursday in the US and other global markets showed little enthusiasm to simply jump back into the market with full conviction. That lack of conviction should come as little surprise given the circumstances. The fundamental backdrop is overloaded with both scheduled event risk and even greater open-ended threats. There are positives the market could pick up on if so inclined. Another company has announced a hefty share buyback scheme (Glencore to the tune of $1 billion) and there are reports the EU may give some ground to cool US President Trump's troubling drive towards auto import taxes. Yet, the risks are simply far more onerous and numerous. With the US-Chinese tariffs due to go into effect, the EU separately agreeing to place metals tariffs on the US and enough data to further economic forecasts; market participants should see reason for caution.

The Dollar is Starting to Grow Heavy

Should the Greenback continue to rise because it has the most hawkish monetary policy bearing of all the majors or perhaps because it is the traditionally preferred safe haven in the FX ranks? Or, perhaps the benchmark currency represents one of the most at-risk baseline currencies owing to its central role in the escalation of global trade wars? There is no agreement on this view, but there is plenty of speculation supporting both positions. Just weeks ago, the rate advantage and textbook haven role was a unique contradiction that nevertheless offered the Dollar consistent buoyancy. Nowadays, the prominence of retaliatory trade efforts by world powers and the loose threats of a collaborative response against the United States are familiar enough that the more complicated but systemic view is starting to break into the mainstream headlines. With the US duties versus China finally due to go into effect and the further escalations with both its largest single counterpart (China) and aggregate trade partner (the EU) still lingering in the air, there is unresolved risk for traders to remain concerned over. Yet, we will also have a targeted fundamental impact in the form of scheduled event risk: June NFPs and the May trade balance. With a clear outcome, if these indicators signal a dovish turn for monetary policy and economic pinch from trade wars; it could hasten a Dollar reversal. 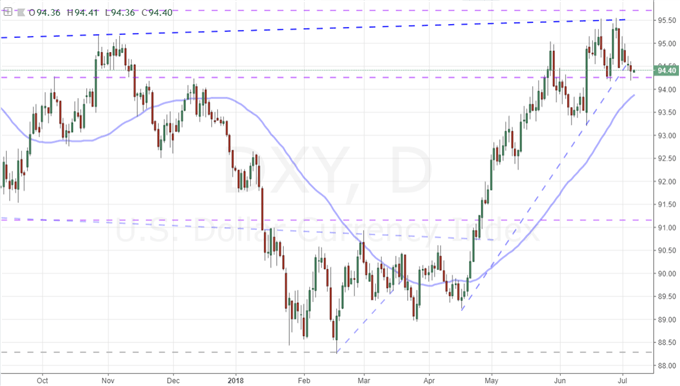 The Dollar isn't the only currency that will face significant event risk over the final 24 hours of the trading week. The Euro will carry the most abstract event risk versus key data. There is very little in the way of consequential event risk on the shared currency's calendar, but the themes are loaded. This past session, the IMF downgraded Germany's economic outlook for 2018 owing to rising protectionism and the influence of Brexit while the EU members voted to approve a tariff on US metals to retaliate against the US. Trade wars will be on the mind after the US and China implement their taxes and reports that the EU may compromise on autos offers to head off a crisis. The Pound's milestones are more timely but no less systemic: following reports that the Brexit Minister David Davis is leading pressure against UK Prime Minister May who is warming to a soft Brexit, the full UK cabinet is due to discuss its customs position Friday. By far, the most targeted event risk will come from the Canadian dollar. With a run of jobs and trade data hitting at the same time as the US equivalent, USDCAD will be an exceptionally loaded pair Friday. 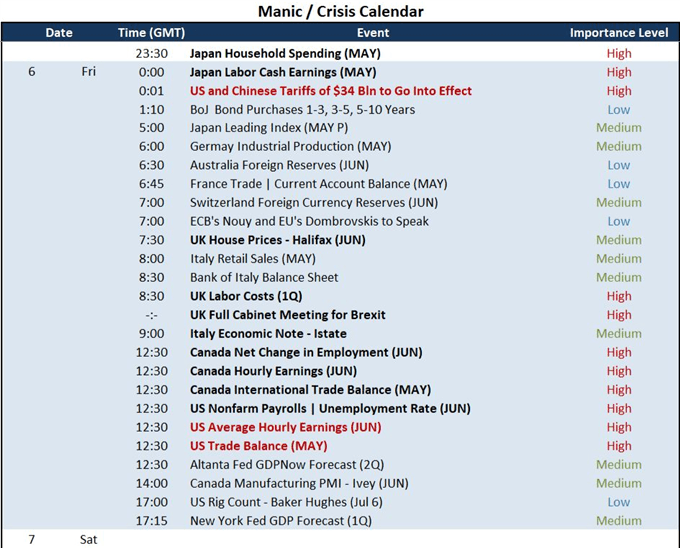 Oil and Gold Look to be Staging Reversals

Where USDCNH and GBPUSD are attempting to sustain trends while the Dow and EURUSD are looking for break from congestion, key commodities are posing a different technical path: reversals. With the Dollar starting to slip, its alternative-currency foil gold has started down the path of a possible medium-term bear trends from $1,240 with a three-day advance. If risk aversion is to coincide with a retreat from the Greenback - increasingly probably with the premium afforded to the Fed and the United States' central role in trade wars - this commodity is arguably in the best position to benefit. Crude oil is another commodity looking to round into a turn - however this one is coming off a multi-week bull trend. The past weeks’ worth of trade has shaped consolidation at the top of an extended channel and Thursday's performance was the first clear retreat. Headlines have run from a jump in US inventories (1.25 million barrels) to US President Trump demanding OPEC increase output to Iran's Oil Minister saying $100/barrel oil is inevitable due to the US president. Will this commodity finally follow traditional fundamentals? And if so, will the picture be clear enough to make way for a trend? We discuss all of this and more in today's Trading Video. 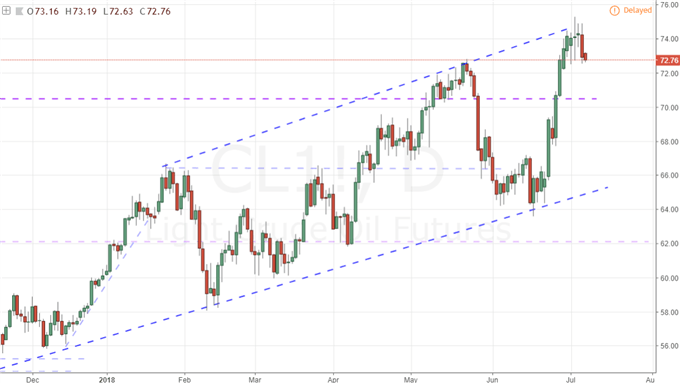