Capital market benchmarks used to assess the health of speculative sentiment were presenting a mixed picture this past session. Yet, that inconsistent chop took a clear shift towards risk aversion into the twilight hours before holiday liquidity drain. In the Asia session Tuesday, there was a notable bounce to come out of the Chinese and Hong Kong indices (Shanghai Composite and Heng Sang respectively). The resultant long 'tail' may entice the most risk fluent of a meaningful reversal, but it is a very feint signal in a long decline. Europe's performance was more encouraging. The German DAX registered a strong bounce on a higher profile trendline that looks evocative. It was no doubt encouraged through relief that the country had avoided a political crisis for Chancellor Merkel on migration policy, but that won't offered a sustained run. For the Italian FTSE MIB and UK's FTSE 100 where sympathy gains were more likely, that certainly will not hold the bulls’ interest. It was the US markets where flimsy conviction fell apart. A gap higher for the S&P 500 and Dow offered a very restrained follow through before the afternoon session started to show heavy selling into the early close. Now, we have the US markets offline for the 4th of July holiday; and that liquidity firebreak will present a large impediment to global development of clear risk trends. 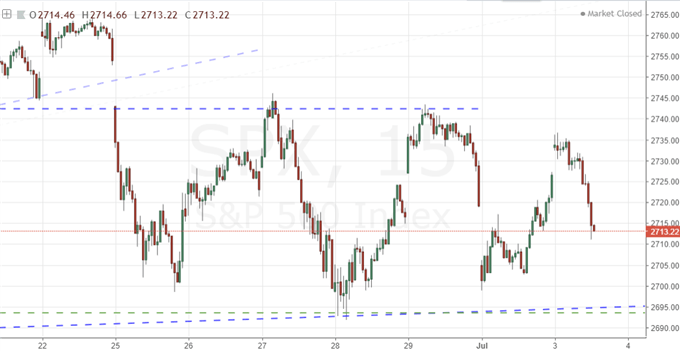 For trading, liquidity is one of the most fundamental considerations when navigating the markets. Holiday conditions certainly do create unique conditions that will shape the immediate future, but the progression of key fundamental themes doesn't necessarily stop because Americans are watching fireworks. Trade wars in particular is critical global threat, and we have seen more and more evidence to reinforce that reality. As recently as this week, we have seen the US Chamber of Commerce criticize the trade policies that have been pursued locally, credit rating agency Fitch warn of global risks from escalating trade wars and reports that the Trump administration was drafting a bill to pull the country out of its WTO commitments. These are dangerous all by themselves, but pairing it to data that shows record withdrawal by investors from favored products like ETFs ($23.7 billion) and the convergence of threats is increasingly unnerving. 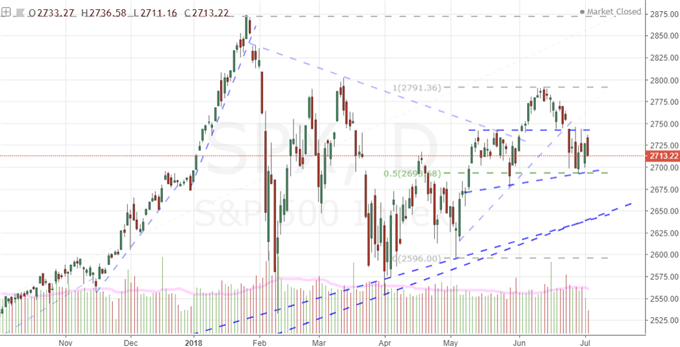 Trade Wars are Starting to Weigh the Dollar

It has been remarkable that over the past few months, the US Dollar has not been hobbled by the threat of trade wars. As the world's largest economy it has more to lose by a global growth crunch in response to these policies than any other country. If there is the belief that it is net beneficial due to favorable outcomes in multiple fronts of negotiations, that is a very optimistic view that so many trade partners will simply acquiesce rather than coordinate a retaliation while opening alternative avenues. The DXY and equally-weighted Dollar indices have both showed struggle for the Greenback over the past weeks (arguably months) that more accurate reflects the uncertainty being dealt with. And, the headlines are starting to undermine the currency's blissful ignorance. In addition to the Chamber of Commerce's warning, we were reminded of the retaliations that are being enacted against the US tariffs with reports that China had banned sales of chips by Micron. Just as troubling was the President's furthering pressures against American company Harley Davidson which has been in his crosshairs for following through with expanding some production capacity abroad. 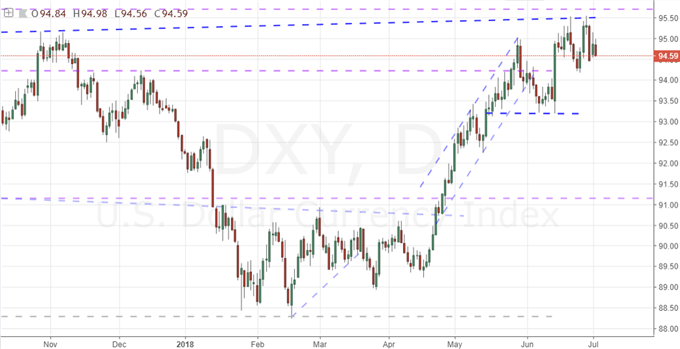 As we head into a lull in liquidity, the limited capacity for many of traders’ favorite currencies and markets to make meaningful moves should be put into even starker relief. Expectations are still set remarkably high for the major currencies and pairs in particular (Dollar, Euro, Pound, Yen) to generate substantial moves sometime in the immediate future. That opportunity seems to continually elude us, but the surprise never seems to subside. There are heavy fundamental restraints on these benchmarks, and we must factor that in when setting up trade expectations. The Dollar's trade war exposure, a Euro dealing with political stability that possess existential risk to the Union, Brexit dominating all other fundamental views of the Pound, and opaque risk views keeping the Yen under wraps are all difficult to circumvent. That said, the Canadian, Australian and New Zealand Dollars along with the Swiss Franc may be less popular but they are substantially less burdened. What we should also factor in for trading moving forward is the stability of China. This is often treated as a side effect of the trade wars, but it is an ends unto itself. Meanwhile, with oil wavering near its four years highs and gold putting in for a bounce after an epic tumble to two year lows; productivity is not something these particular assets seem to lack. We discuss all of this and more in today's Trading Video. 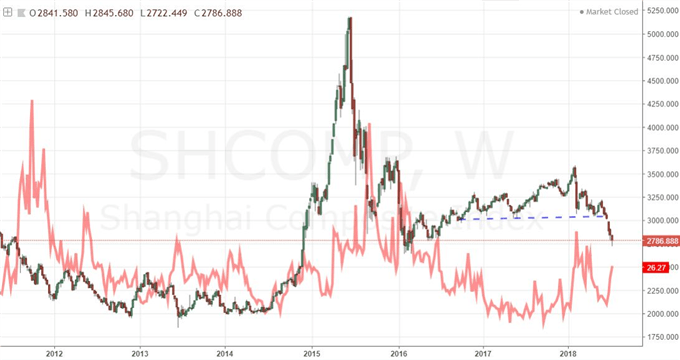