Risk Trends Start the Week/Month/Quarter On an Uneven Footing

Monday's session has brought us into a new month and quarter - with the typical speculative and procedural rebalancing that we would expect in these rollover periods. Considering how the market traded through this opening session, there is serious uncertainty plaguing investors across regions and asset classes. Considering the most pressing and systemic financial threat of the time - trade wars - was further escalated over the weekend, it would have been fair to see a more substantial and progressive a decline than what we registered. The open clearly reflected concern. Global equities all opened significantly lower through either a gap or the opening hours of trade on their respective sessions. However, by the close of New York trade, the benchmark indices had clawed back the losses registered on steep bearish opening gaps. Yet, not all that was risk aligned was able to recover the zombie like complacency that has worked so hard to keep asset prices buoyant. Both the HYG junk bond and EEM Emerging Market ETFs gaped sharply lower to open the day and failed to recover most of the ground lost before the first price was even registered for the session. This is perhaps a poor signal for what the rest of this week will offer in risk terms. We have a US market holiday Wednesday which will present a temporary break. Furthermore, the fundamentals risks that hang over these markets are both severe in their capacity for reach and turn trend with little forewarning. 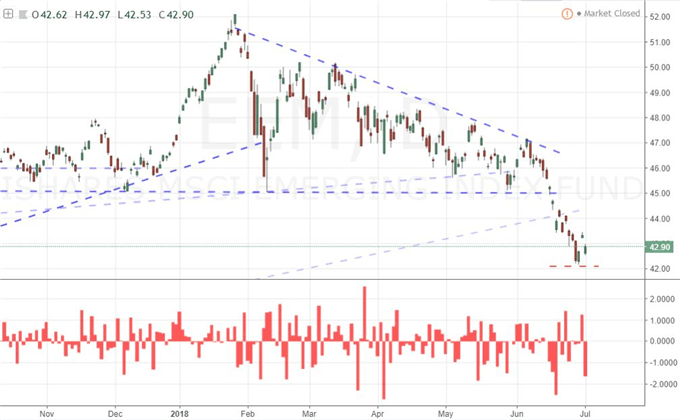 When there are gaps between headlines reflecting the escalation - or the rare de-escalation - in trade wars, there is a tendency in risk trends for complacency to creep back into a system long rewarded for excessive risk taking. It isn't that these risks have truly dissipated but rather market participants collectively revert to the comfort of simply downplaying the systemic threat that such a widespread and costly standoff could pose to the global economy and financial system. The last status updates we have received on this cross-broader economic fight fell heavily on the troubling side of spectrum. Responding to the Trump administration's decision to move forward with metals tariffs against the European Union, Canada and Mexico; we have seen retaliations from those target countries move the focus away from the engagement the US has maintained with China to these Developed World counterparts. Over the weekend, Canadian Prime Minister Justin Trudeau announced $12.6 billion in tariffs against the US as a like-for-like response to its own tax bill. Far more troubling for the world, however, were reports that the EU sent a warning that the President Trump's 20 percent tariff threat on imported European autos could draw a massive $300 billion cost. This game of chicken has likely already pushed the world to a point of no return when it comes to finding conviction in absolute complacency. Beware the false sense of calm. 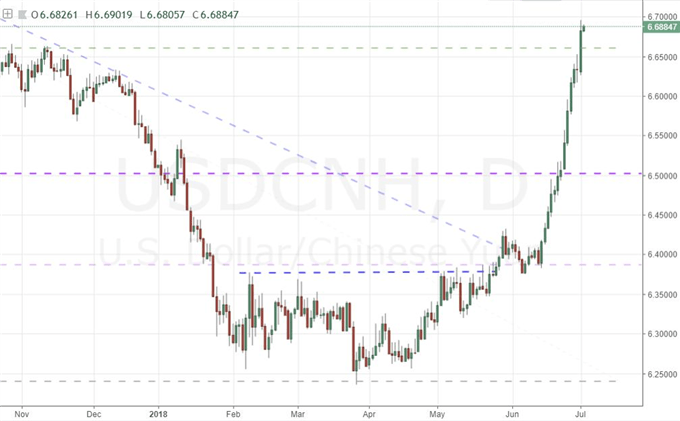 With the threats of retaliation growing and coalescing against the United States, it is impressive that the Dollar has proven thus far unflappable. That said, this benchmark currency seems just as dependent on an impractical status quo as overtly risk assets. Headlines outside trade war escalations for the Greenback were split between an unexpected improvement in the ISM's manufacturing report which does little to instill a belief that the country will avoid a substantial cost from engaging in aggressive trade policies. The IMF's updated reserves report in contrast showed another slide in the percentage of reserves the dollar represented in central back coffers - a truly systemic risk that is not easily translated for short-term risk. Meanwhile, the Euro and Pound were facing new, local political risks. For the Euro, German Chancellor Merkel was facing a critical threat to her pressured coalition government with Interior Minister Seehofer was threatening to resign and putting CSU support in jeopardy. However, it was reported that this threat to stability in the Euro-area's largest economy was averted when the two came to an agreement. In the UK, Prime Minister May was reportedly trying to move minister to minister to drum up support for a unified Brexit front; but resistance clearly remained. 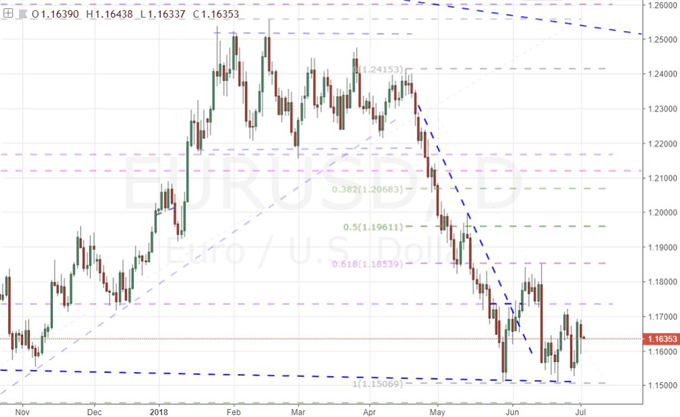 Where the Currency Moves are Heavy and Commodities Extend Trends

In contrast to the lack of commitment and even bearing from the core majors, there is some remarkable progress being forged by the other majors. The Canadian Dollar has seen a five-day recovery on an equally weighted basis that seems to defy the Prime Minister's move to raise the ire of the American President. Though progress seems uneven through EURCHF and USDCHF, the Swiss franc has extended a remarkable bull trend a few months in the making. From the top carry currencies, the Australian Dollar is facing the RBA rate decision and then an update to the trade balance as it slides; while the New Zealand currency suffers a far more intensive decline without further motivation. A little further afield, the Mexican peso experienced a jolt of exceptional volatility to start the week in the aftermath of the Mexican presidential election. Lopez Obrador (Amlo) is - no surprise - not a fan of Trump's pressure, but there were few scenarios where the leader would be. Another contrast to the waffling Dollar and equities was the performance from key commodities. Gold has extended its three-month slide to an approximate 9 percent loss that brings the metal to support of questionable strength. For oil, progress was limited, but it nevertheless held near its more-than-three-and-a-half year high. Notably, the spread between US and UK benchmarks has collapsed from an $11.50 difference to a more reasonable $3.40 gap. We discuss all of this and more in today's Trading Video. 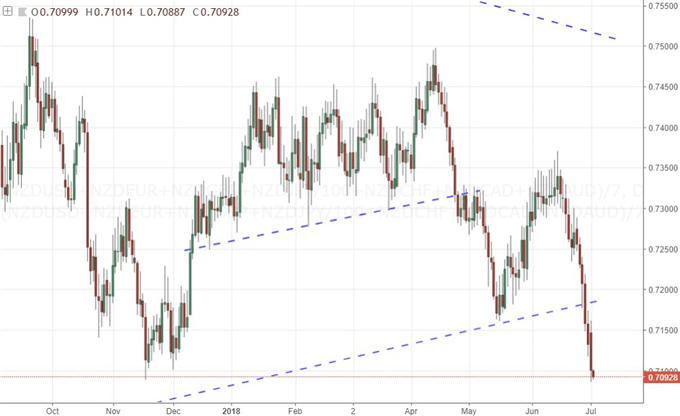