Will Fed Stress Tests Help or Hinder the Dow, EURUSD Refuses to Break

A Mixed Picture of Risk Carries Us Into Friday

Over the past weeks, we have seen a tangible risk aversion through correlation across a range of risk assets alongside a hefty decline for many of these measures. Yet, the speculative shift isn't currently running roughshod over all other fundamental themes. We saw this flappable backdrop cave to cross winds this past session as the connection between speculative markets wavered through the Asian and European trading hours Thursday and then turn against trend with a bounce through the New York session. The fundamental backdrop offered up little support for such a move, but the gains were registered nonetheless. The Dow presented the most convincing technical picture with a trendline bounces that suggests risk aversion has yet to reach terminal velocity. Momentum - a technical equivalency to conviction - has never cemented itself behind deleveraging; but the ingredients are there if speculative concerns start the proper chemical reaction. So, be mindful of passively buying dips. 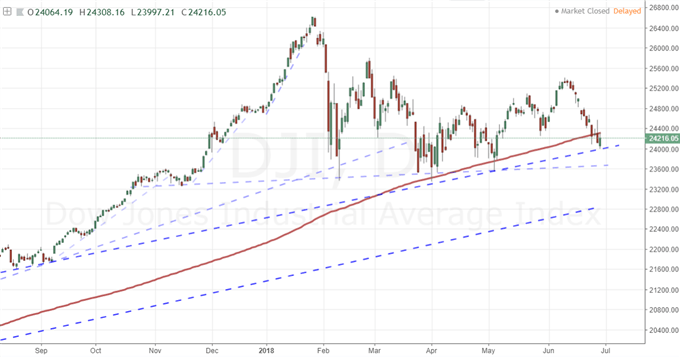 The Fundamental Side of Shaping Risk Trends

Looking for the fundamental spark for a speculative recovery this past session, there was little meaningful data or headline fodder that would beat back the darkening clouds of uncertainty for over-exposed speculators. On the trade war front, there was little break in the pressure between the United States and China - or between the US and the European Union. That latter relationship is of particular consequence given it involves the two largest developed (read 'open') economies in the world. The threat of President Trump's 20 percent tax on imported European autos still hangs in the air. Yet, back to China where the relationship with the US is still on fire, the country is making a material effort to open up with the rest of the world. Dropping a tax on imported UK beef and reports of easing restrictions to trade with neighbor Asian economies speaks to a strategy likely meant to solidify the country's position in the global ranks and perhaps beat off a financial crisis as it struggles to balance growth and financial market stability in its move away from financial leverage. 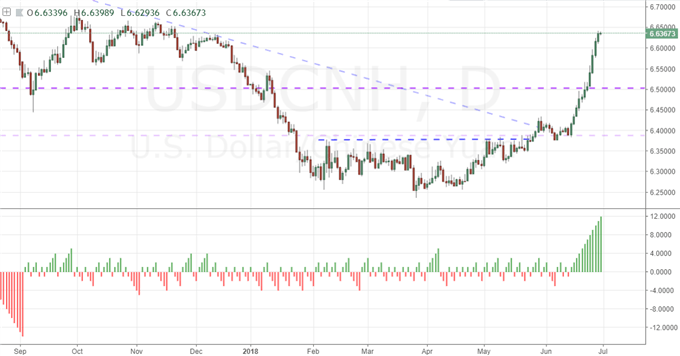 Prevailing Trends for the Yuan, Oil, Pound and Loonie

Despite the tentative balance found in risk trends this past session, the pressure would not let up on either China's benchmark equity index (the Shanghai Composite) or its currency (the offshore Renminbi, or Yuan). The stock measure extended its tumble to fresh two-year lows as it now finds itself down over 22 percent from its January high. That is by far the worst performance from a major economy's benchmark index. For the currency, USDCNH has advanced for an incredible 11 consecutive trading days. This move was already a record at 9, so this is just extraordinary. While there could be a 'safe haven' flow about this move, it is very likely that this is also a move of opportunity by Chinese authorities to soften the trade war blow. Another remarkable move comes from US oil which stretched even further to a four-plus-year high. This advance defies news of US production and exports hitting a record high as well as the OPEC+ discussions of further expanding output. Suggestion that this is merely response to inventory figures in the US seems unreasonable. Two other moves that are not as prolific but worthy of observation - and even trades in the proper conditions - are the Pound's slide and Loonie's rebound. The Sterling extended its drop this past session to take out its tight congestion on an equally weighted index and extend the slide for Cable. We'll see if 1Q current account will stir Brexit fears any further. As for the Loonie, the effort to turn its bear trend is bearing fruit, although this is lacking for a clear fundamental spark and seems more speculative in nature. 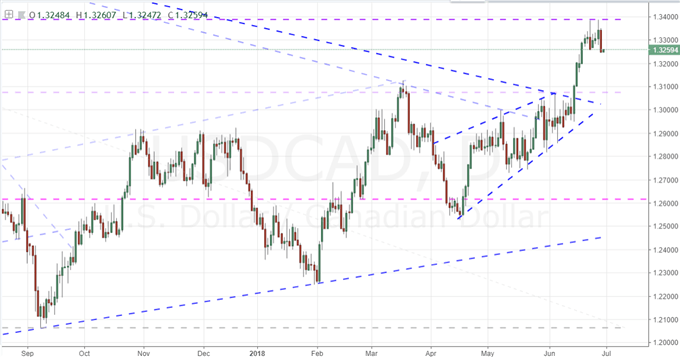 EURUSD Refuses to Make a Move Even with Fundamental Motivation

Where the USDCNH and GBPUSD are making noteworthy progress, one of the most fundamentally buffeted crosses seems to have found its balance despite the docket and headlines. EURUSD has once again held the well-established line of support at 1.1500, despite an abundance of catalysts that would have a month or even a week ago offered more than enough motivation to force a break. The responsibility certainly doesn't lie with the Dollar. It's own backdrop continues to be uneven as its connection to fundamentals is still unmoored. Adding to the trade wars concerns, a report came out Thursday that President Trump had referred to the NATO alliance as a 'bad deal' similar to NAFTA. Ahead, we will see if rate speculation can regain its influence over the currency with the Fed's favorite inflation indicator (the PCE deflator) on tap. Far more fundamentally charged is the backdrop for the Euro. The ECB's bulletin warned that the Euro and monetary union were at risk if the member countries didn't start to work off their large debt loads while growth was still robust. The Eurozone sentiment surveys further retreat while the first day of the EU Leaders summit ended without a statement due to the Italian Prime Minister's refusal to write off on the statement until the migration issues were settled. Given the convergence of so many themes around EURUSD, it is a critical pair to watch for market assessment through Friday and into next week. We discuss all of this and more in today's Trading Video. 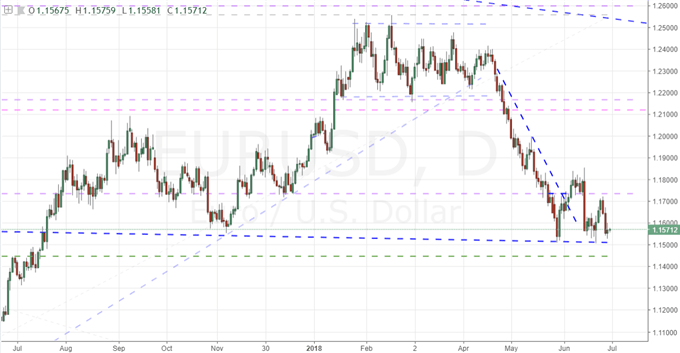