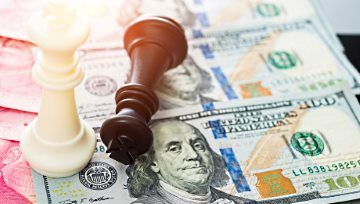 Just When You Thought Trade Wars Couldn't Escalate Any Further

In the past months, we have seen a steady escalation in global trade wars driven primarily by the United States. Much of the attention over this period has been focused on the relationship between the US and China as that is where the most dramatic headlines were arising. With President Trump ramping the offensive up with threats of a massive $200 billion import tax bill on China following their trading less extreme tariffs, it became clearer that this these were not ideal threats being tossed around. Yet, for the risk that such an economic standoff between two of the largest individual economies represents to the global economy; there is a hesitation in treating it as the seed of forthcoming recession and/or financial crisis. Most countries have called China an unfair trade partner in the past, so the risk of a coordinate retaliation is lower. Further China is still a purposely disconnected global member of the world economy. There is a presumed fire break for crises. Between the US and EU, there are no such caveats. And, President Trump has pushed the war to a new and far more dangerous front with the European region when he threatened in a tweet to add a 20 percent import tax on cars from the region unless they significantly altered their own trade policies on US autos.

Risk Trends Starting to Lose Their Complacency in Trade Wars

Despite the growing recognition to the high risk fallout of a global trade war, we continue to see speculative markets present an air of skepticism that the situation couldn't possibly impact their investments. This is more complacency and lack of awareness following a decade of recovery than it is a robust evaluation of the fundamental backdrop. Selective reasoning for speculative view is not uncommon, but the bias does shift with circumstance. Market's may not be looking forward to the more troubled path of growth of speculation amid such troubles (including monetary policy, growth, exposure, etc), but eventually practical developments will undercut convenient neglect. We can see uncertainty in all corners of the capital markets - even if the last move was an uptick. From US equity indices, the Dow finally put in for a bullish close following a string of 8 consecutive daily losses - matching the longest bearish series since February 1984. Global shares markets have similarly wavered this week but found weak bounce through Friday trade. Emerging markets, junk bonds, government bond yields, carry trade and more have all seen their pressure build; but critical breaks have so far held off from prompting self-sustaining momentum. 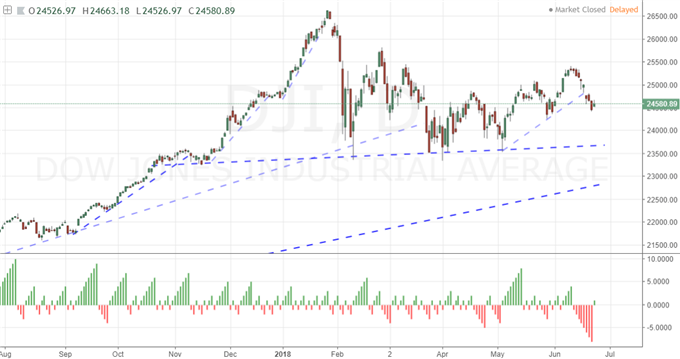 The Case of EURUSD In this Next Stage of Trade Wars

With the global trade war starting to shift to the Atlantic front, the FX market's benchmark currency pairs becomes particularly important for keeping track of systemic trends. Through the final 48 hours of this past trading week, EUR/USD marked a considerable bounce. This is remarkable because the Euro's fundamentals were not that encouraging. While the Eurozone composite PMIs were encouraging, far more important was the IMF's Article IV review that triggered a number of warnings over the financial and economic health of the Euro-area. And, of course, engaging in a trade war with a leader who shows little concern over the long-term ramifications is a serious threat. Yet, the Euro was able to gain because the Dollar's losses through the period were more significant. The Greenback had been so far rather stable despite its being the instigator down the path of mutual economic destruction. However, recognition of the stakes the US faces through the loss of growth and aggregate effect of individual retaliations is starting to dawn. Long-term, this will be a critical theme to track; but keep tabs of the Fed's second round stress test results on banks (for dividends and buybacks), the Fed's ambitions and the general intensity of risk trends with appetite for havens. 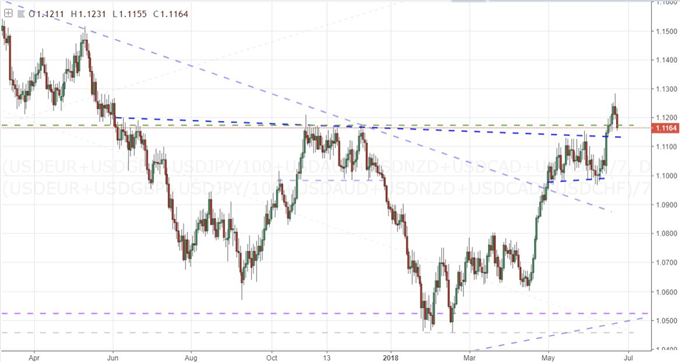 Moving away from the global reach in some of these big picture themes is difficult. However, some currencies are finding their coasts are clearing. For the British Pound, we still have a long road to remove the risk of Brexit and the EU meeting next week will reminds us that this is not putting out fires within England's own government. However, the course has been cleared somewhat this past week with the compromise between government and Parliament. Watch the headlines, but the Sterling may find it easier to promote movement - especially if taking advantage of heavier momentum from counterparts. For the Canadian currency, the inflation and retail sales data released Friday cool the unique BoC rate forecasts somewhat, but the Loonie has already seen its speculative overshoot retrace. If the currency is due a natural rebound, keep tabs on USDCAD, CADJPY and CADCHF. For volatility without consistency, beware the Kiwi dollar. The RBNZ rate decision is on tap mid-week and the last meeting left us with the threat that more rate cuts could come. We discuss all of this and more in this weekend Trading Video.