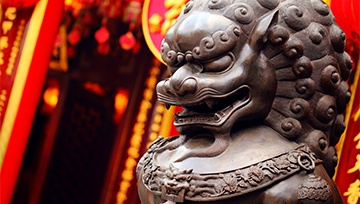 The US and China Escalate the Terms of (Trade) War

Trade wars are growing more and more pervasive. It is getting to the point where even the historic levels of complacency that have developed out of years of unprecedented monetary policy will be able to prop up speculative appetite. The shift towards competitive growth and populism is not new, but the scale of outright belligerence is reaching levels that were previously considered impossible. The latest developments in the specific standoff between the US and China was President Trump's threat to implement an additional $200 billion in tariffs against its Asian counterpart in response to China's decision to scrap plans to purchase tens of billions of additional US goods and instead pursue fresh tariffs. To the US, these are seen as escalations; but to China, it simply considers it a reasonable response to the $50 billion in import taxes announced Friday. That US-implemented duty was justified by the perception that China has been engaged in unfair intellectual property theft for years. The root of the problem is perception. Each believes they are justified to react and neither is morally motivated - or in dire-enough economic position - to back down. That is a dangerous position for the global economy as this is quickly escalating to destabilizing proportions. And, even if the ultimate figures are not as extraordinary as what is being touted, we have already drawn the market to more closely question its already separately extreme exposure to risk trends. 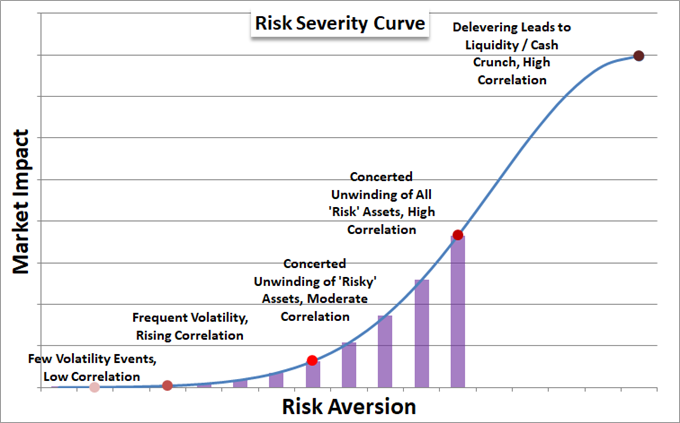 See the Spread of Risk Aversion

There are two general dynamics that lead to a self-sustaining deleverage on risk exposure (or at its extreme, a full financial crisis) and that is the breadth and intensity (depth) of risk aversion. We are seeing the first of those aspects solidify in the markets. Following the news of the next stage of trade wars, the Shanghai Composite understandably tumbled. The benchmark Chinese index posted a sharp 3.8 percent dive that ensured there was no mistaking the breakdown it had marked technically this week. To make clear this was not an isolated fear targeted on Chinese and US markets, other key Asian and European indices suffered significant losses through Tuesday's session as well. And, while it may seem reasonable that the US benchmarks were in retreat as well; it is actually a remarkable turn of events given the outperformance they have enjoyed over the past decade. While the Dow may not have lost an exceptional amount of altitude in the past week's slide, it is nevertheless down for six straight trading sessions which is the worst run since March 27, 2017. Spreading out to different asset classes, we find the deeply exposed EEM Emerging Market ETF has a series of large gaps lower which adds considerable intensity to a record breaking (at least on my chart) 9-day dive. It is the less explicitly exposed US junk bonds, carry trade, speculative commodity declines that should register greater concern among global watchers.

The Dollar, The Yuan and Gold

As it grows increasingly difficult to ignore or play down the scale of trade wars, it is worth watching the assets with the most direct or generally vested exposure. Where US indices are sliding at a restricted pace, the Dollar has notably gained this past session despite its explicit implications. The DXY Dollar Index held at the 95 range resistance that has capped previous major bullish swings, but an equally-weighted Dollar index shows actual progress. When we deemphasize EURUSD, we see the Greenback has moved to an 11 month high. This currency still maintains certain safe haven aspects even with so many of the headlines pointing back to it. That immunity will not hold forever, but that in itself speaks to the current state of intensity of the situation. Meanwhile, the Chinese Yuan has depreciated materially amid the rising tide of retaliation, but not likely due to a simple evaluation of this scenario boding more poorly for China. More likely, this is policy officials allowance for their currency to depreciate as previous massaging yielded no ground in negotiations. Looking for ideal safe havens in this situation, gold is arguably without equal. Yet, with the Dollar rising, the metal remains under pressure. As the situation escalates and risk aversion intensifies with the faults in 'normal' havens coming to the forefront, we will see the metal fall back on its unique merits. 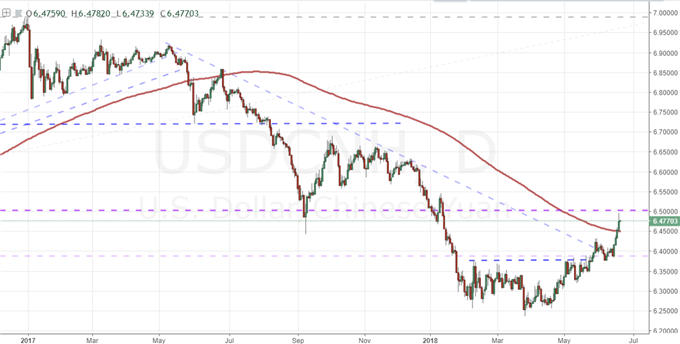 Keeping Tabs on the Euro, Pound, Aussie Dollar and Kiwi

While trade wars as a theme is important to watch - just like general risk trends - we shouldn't monitor it to the exclusion of all else. There are other important events and themes at play that can generate significant market movement for risk and opportunity. For the Euro, ECB President reinforced his bank's dovish turn last week when he spoke at the second day of the Sintra central bank forum. The third and final day will culminate with a panel hosing the heads of the Fed, ECB, BoJ and RBA. For the Sterling, we are dealing with two high profile themes. Thursday's BoE rate decision is around the bend and speculation will have to reach a little further as they are not expected to change rates at this meeting. More immediate is the vote on the EU Brexit status in the Commons Wednesday. This will decide what level of say Parliament has over troubling Brexit outcomes. Though it would theoretically reduce the possibility of a disorderly 'no deal' scenario, it increases uncertainty which is risk itself. Meanwhile, the New Zealand Dollar has been in retreat lately due to risk trends, but key event risk in current account and GDP can move the focus back to economics. For the Australian Dollar, the six-day slide on an equally-weighted basis was the longest dive since December 2016, motivated by direct trade concerns between Australia and China. We discuss all of this and more in today's Trading Video.