Trade Wars Shake the Dow but No Freefall Yet, Dollar Stuck at the Border

Trade Wars Take Up the Speculative Baton from Monetary Policy

Last week, both the FX and capital markets were being driven by headlines focused on monetary policy. The Federal Reserve's rate hike and accelerated forecast for 2018 followed by the European Central Bank's decision to extend its stimulus program another three months leveraged significant volatility for the groups' respective currencies; but it would also establish a wide spectrum for 'appropriate' policies for developed world economies. The implications of such wildly divergent monetary policy and its influence on the financial system will certainly carry us forward, but another theme has moved up to the forefront in the meantime: trade wars. Nothing has actually been resolved on this front over the past weeks and months since it truly erupted, but the markets have grown numb and complacent to the risks that the position poses to the global economy and financial system. Yet with each flare-up, it grows ever more difficult to ignore the implications.

The US and China Tensions Continue to Escalate

Reaching a self-imposed deadline to establish target assets for import taxes this past Friday, the United States announced that it was moving forward with $50 billion in tariffs against Chinese imports to combat what it considers years of intellectual property theft. China viewed the move as unprovoked provocation and responded to the US taxes in kind. While there is still room to view these moves as one-offs whereby negotiations can arise and tempers cool, President Trump's threats that he was ready to respond to the Chinese 'retaliations' signals that this is a legitimate trade war where both sides refuse to back down and instead threaten global growth and financial security to protect their moral claims to free trade. The news (after this video was recorded) that Trump was threatening an extreme $200 billion in tariffs Tuesday morning only further ensures it will be difficult to just dismiss all of this as jawboning. Through Monday, we saw the response to this event risk clearly. Asian shares opened lower with the Shanghai Composite leading the way hitting its lowest level since September of 2016. The DAX carried the pain into the European session with a gap and slide lower through active trade. By the time the wave hit the US markets, the S&P 500 and Dow gapped lower but then retraced much of the losses by close - progressing the gradual turn but refusing to give way to momentum. 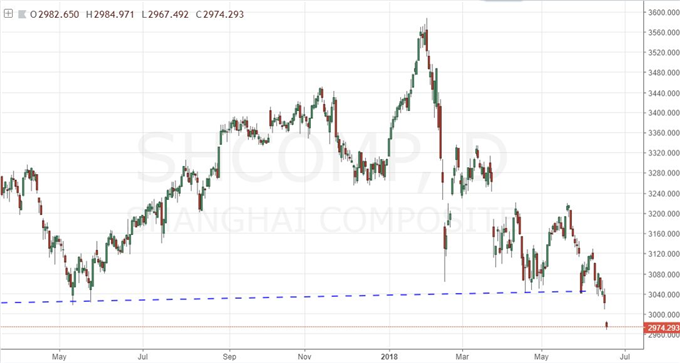 Trade wars do not produce clear winners - but they will make many losers. There is an underlying assumption in the Trump administration that pursuing import taxes on profligate trade partners will confer some benefit to the local economy through restored employment, investment or industry growth. Yet, that confidence does not readily show through in the performance for the Greenback. This past session, the trade-weighted (read heavily reflective of EURUSD) DXY Dollar index refused to make an attempt to overcome 95 - range resistance for the past 11 months. An equally-weighted Dollar index reflects the same struggle, suggesting the Dollar's progress is increasingly dependent on the weakening of key counterparts like the Euro, Pound and Yen. With the recognition of a collective trade war translating into collaborative retaliation (with all of its consequences), the Dollar will not simply regain traction, even if inspired by rate differentials. Meanwhile, the Euro will have to consider its own place in the trade war line while the ECB tries to earn back its influence at the Sintra forum and the stability risks are refreshed as German Chancellor risks upheaval over immigration policy. For the Sterling, UK Prime Minister May was dealt another check on Brexit policy when the House of Lords voted to retain say over the country's divorce should a meaningful deal not be struck by February. Yet with the House of Commons voting Wednesday and BoE decision on Thursday, markets are not ready to turn the concerns into market action.

Trade Wars Spread to the Aussie Dollar, Oil and Metals

In the trade wars thus far, much of the attention on fallout has been directed to direct participants: US, China, EU, Mexico and Canada. However, the influence of this theme or the reach of the United States' threats have not been restricted to these counterparts alone. The onus of trade wars is a global one when the key participants are the world's largest economies. For carry currencies like the Australian dollar, the typical threat is clear but the reality of the situation is much more complicated. Locally, the Australian government has threatened to clamp down on what it considers foreign interference by China. To an already provoked China, the response is expectedly sharp and the recognition of the country's dependence on this dominant economy grows crystal clear. In commodities, gold's role as an alternative to traditional currencies that will collective suffer an outright trade war is not as straightforward. The retreat from last week's central bank response was lead to a clear break but now is within reach of a key support. Silver on the other hand exerted its best technical potential in the dive after rejecting resistance. Oil is another asset that is finding the spill over pressure. There are implications through global growth, but the more direct impact is seen through China's target of oil and other refined US energy products for tariffs. The spread between US-specific WTI oil and European-favored Brent will be telling on these uneven pressures. We discuss all of this and more in today's Trading Video.