See how retail traders are positioning in key Dollar pairs like EUR/USD, leveraged equity indices like the S&P 500 and FTSE 100 as well as US crude oil after Friday's plunge using the DailyFX speculative positioning data on the sentiment page.

There were certainly impressive moves from certain risk-oriented markets this past week, but there wasn't a consistent drive through sentiment - bullish or bearish. That is likely to change through the coming week. There are a number of fundamental themes that have continuously drawn concern or ire from the market, but the threats have been deemed too nebulous or too far off. In reality, what threatens the chase for higher returns in the financial system nowadays is already eroding the backdrop for speculative reach that has been pursued to excess over the years, but recognition is best served by extreme events that cannot be ignored. Trade wars is just such a threat to stability that has lost traction owing to the agreement by the US and China to pause their escalating reciprocations, but conditions are far from encouraging. The United States is pressuring a trade war with the other, equally important economic players (like the European Union) with little resolution. Next week, the temporary hold on the metals tariff is due to expire on June 1st and it would be wise to watch for any traction on rumors that the Trump administration intends to follow through on a 25 percent tariff on auto imports. Meanwhile, open threats of monetary policy normalization unsettling risk trends, the US-North Korea standoff continuing to fester and a European financial crisis redux can easily be triggered with little warning.

The Dollar's Run Has Technicals and Event Risk to Deal With

Despite a marked lack of the headline fodder that usually promotes strong moves, the Dollar have nevertheless carved out a remarkable climb these past six weeks. That quiet strength carried the DXY Dollar index through to the drain of liquidity this past Friday with the highest close of 2018. Its lift doesn't arise from an overt source with such a thin economic docket, interest rate expectations actually softening and speculative positioning not registering a substantial unwind of net short positioning in COT figures. Yet, the combination of counterparts easing simultaneously, speculative complacency favoring trend and the anticipation of exposure rebalancing long term has kept a favorable wind to its back. 'Status quo' will prove a little more difficult to subsist on in the week ahead however. Following the liquidity lull with Monday's US (and UK) market holiday, we will dig into events that carry distinct political risk for the Greenback and data that is well known for stirring volatility. In particular, the PCE deflator on Thursday and May nonfarm payrolls (NFPs) on Friday will update expectations for the Fed's tempo moving forward as these are the preferred indicators for the central bank in its pursuit of its dual mandate. That being said, implied rate forecasts derived from Fed Funds futures have suffered a notable retreat this past week which calls into question a favorite fall back for bulls. 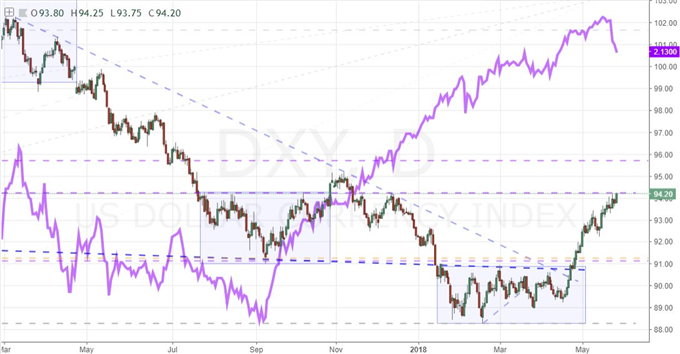 Fundamental Themes and Technical Cues for the Euro, Pound and Loonie

Outside of the Dollar's sphere of influence, there are some promising signs of volatility and momentum for a few other FX majors that can cater to technical opportunities to facilitate appealing trade setups. The Pound will be the least definitive of these majors, but not because of the pressure or its pacing. The Sterling has seen a marked retreat these past weeks between fading BoE rate forecasts and recognition of a troubled Brexit negotiation. The data and key events from the UK however is relatively thin. That could serve as the motivation to leverage speculative turns on key pairs, but it is more likely to allow a sustained burn for pairs like GBP/USD, GBP/JPY and GBP/AUD that have already produced critical technical breaks. The Canadian Dollar will be a more interesting candidate for me next week. The Loonie has just recently produced a broad technical break lower and the docket ahead holds both 1Q GDP and the Bank of Canada rate decision - events equally capable of sparking volatility. For sheer potential though, the Euro is top billing. The currency has slipped on a market-wide basis for five consecutive weeks, but there is far more premium that it can work off. Discussion of ECB policy moves and surge in Italian bond yields amid EU stability fears can facilitate deep trends if properly motivated.

A Special Focus on China and Oil

Moving forward, special attention should be paid to the energy market and Chinese assets. For crude, the interest is perhaps obvious. Friday's tumble from the US-based WTI was an incredible 4 percent which represents the largest single-day loss in 12 months. A move of that intensity naturally came on a significant technical break which called a close to the rising wedge shaped over the past few months. Yet, this curb on momentum should not be treated as a fast-tracked reversal that can readily burn through months of bullish build up. This market has consistently rejected speculative and fundamental expectations for trend, reflexively returning to congestion after short-lived volatility flares. A change in direction doesn't necessarily shake that impediment even if there are convenient headlines such as rumors of an OPEC and Russia production increase plan. For China, the assumption is always stability thanks to policy official intervention in exchange rates (USD/CNH) and capital market benchmarks. Yet, ahead, we have the IMF's Article IV consultation due to give a more unbiased assessment of country's economic and financial health as well as the supposed start of the MSCI's (the largest purveyor of ETFs) purchase of A-Shares for its Emerging Market products. We discuss the rising potential for the week ahead in this weekend Trading Video.