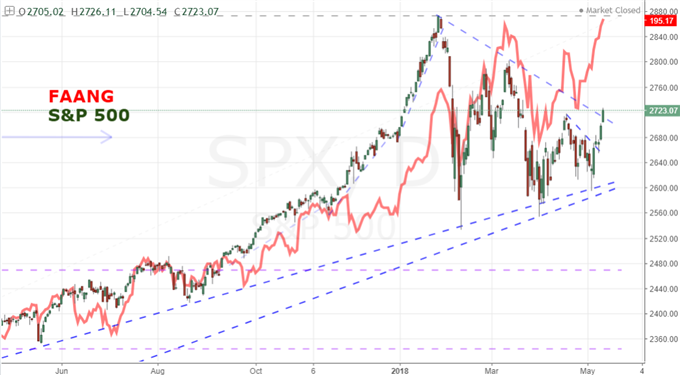 The Leader Board of Risk Trends Returns - Dispersion and All

Depending on how you measure the health or 'risk appetite' in the broader market, you can get a very different signal for your trading. Behind US equities, there is anticipation that a new trend may be laying roots. From the S&P 500, a new higher high overtaking April's peak helps offer traction while the Dow has now registered a sixth consecutive advance to match the longest bull run in six months. When we turn the focus tighter on the past five years' market outperformance, we find the technical progress on the tech heavy Nasdaq 100 is more remarkable than its blue chip and broader counterparts. And, a step further to reflect on the FAANG tech sector market leaders, we have returned to retest record highs. Yet, my measure of sentiment is in measuring a wider range of risk assets through their intensity and correlation. The mix ranges from European equities like the FTSE 100 which has been leveraged higher by an exceptionally weak Pound to Treasury yields and carry which continue to flounder. Risk appetite can certainly exist for certain assets and markets, but when that is the case, it doesn't speak to particularly robust trends.

There were two noteworthy central bank updates this past 24 hours, and both of them were measurably dovish. Of the two, the RBNZ's monetary policy decision was more exceptional. The New Zealand central bank held its benchmark lending rate unchanged (at a record low though more competitive than most major currencies' yields), but it explicitly offered a warning that the next policy change is just as likely to be a cut as a hike. That is a material shift from the generally neutral stance they previously held and particularly damning for a currency whose status in the FX market is as a carry currency. The reaction from the Kiwi was sharp and wide. Later in London, the Bank of England would also hold its benchmark unchanged, but reflection on weak data and softer language around policymaking undermined a hawkish disposition the market had held for the Sterling as one of the only currencies that had seen a rate hike in this cycle so far. Naturally, the Pound dropped across the board. This has generated remarkable volatility and even some tentative trade opportunities, but we should also consider the bigger picture. Along with the ECB and BoJ's dovish turns over the past month, there has been a global dovish shift in monetary policy. Are we still operating under the previous equation that more cheap money spurs aggressive speculation, or is this growing evidence that financial and economic conidtions warrant extreme support?

Did the Dollar Really Drop Due to the CPI Update?

The Dollar took a notable dip this past session which was all the more remarkable because it comes after four weeks of impressively consistent gains. The medium-term trend has been bullish, but a reference of price action all the way back to the beginning of 2017 still has the long shadow of a very strong bear trend. Alongside this mixed technical view, we also have questions for fundamental motivation the currency's rebound this past month rising on otherwise well-known and theoretically already-discounted themes like the Fed relative monetary policy advantage. It is against this opaque backdrop that there is a more desperate effort to 'explain' what is driving the markets forward. That said, the connection for the Dollar's slide being made through the CPI data is to be expected. Yet, that data would not undermine the interest rate forecast for the Fed that has been in place for months. The 2.5 percent headline figure and 2.1 percent core inflation figure are both inline with pacing and central bank forecast. I point this out as it is good evidence that we should identify what is truly motivating a market rather than look for anything that can justify a preconcieved view (whether that is a technical set up or fundametnal expectations). I still give greater weight to the effort to unwind the heaviest net short Dollar futures position in five years and record net long holding for EURUSD. That said, perhaps the University of Michigan Consumer Confidence survey due Friday can ground the Dollar back in traditional fundamentals. 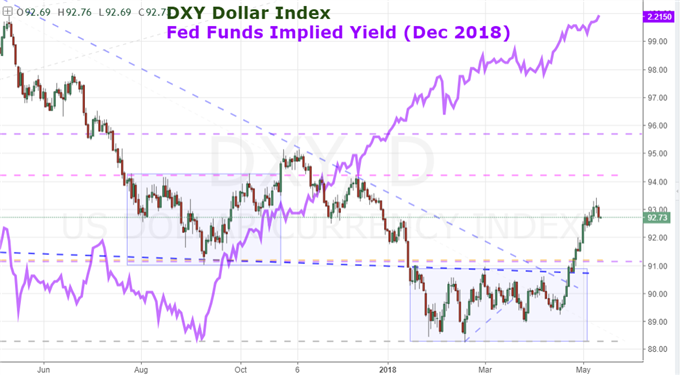 Where the Pound and Kiwi were clearly motivated by explicit fundamental events while the US Dollar at least had event risk, the Australian and Canadian Dollars' impressive volatility should come with far greater scrutiny. Neither currency had explicit catalysts of any merit, yet both registered remarkble moves through Thursday. The Canadian Dollar's motivations will be put to the test through this final session of the week as are coming into event risk that has a history of producing impressive volatility - at least in the short-term. The April employment report from Canada should certainly be monitored if you have any designs on pairs like USD/CAD or CAD/JPY where technicals are whetting appetites. As for the Aussie Dollar, this was the best performer on the session and could be described as an overdue rebound. But it didn't have a tangible spark which makes its ambitions for a deeper recovery suspect. There is not key event risk to end this week and the docket next week is generally light. Lastly, its important to keep China on our radars. For those that weren't trading in 2015 and 2016, some of the biggest market-wide volatility events originated from China. This past session Fitch released a report suggesting the Hong Kong banking system was looking more unstable due to the effort to integrate into the mainland Chinese financial system. It reiterates the questions we should be asking about USD/HKD's extreme and its contrast to USD/CNH. We discuss all of this and more in today's Trading Video. 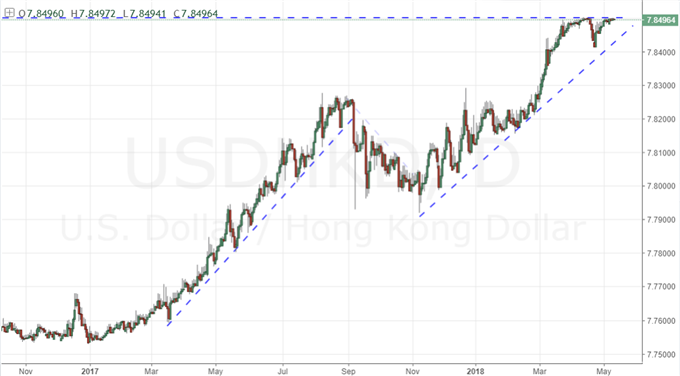