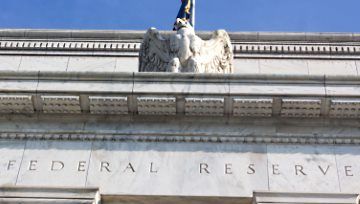 US President Donald Trump scuttled yet another international relationship Tuesday when he announced the United States would pull out of the Iran nuclear deal. The deal was struck back in 2015 with the Iran finding relief from the economic sanctions it was held under while the US found benefit from the Middle Eastern country's slowed progress towards nuclear armament. With this announcement, the US intends to reinstate its sanctions. That said, it is unclear whether Iran will in turn respond by returning to Uranium enrichment. That is because the the five other country's party to the deal (the UK, Germany, France, China and Russia) have tentatively stated they would continue to honor the deal. The risk here does immediately rest in the fractured relationship between the US and Iran - though that can have implications in the future with additional troubles. Rather, the more remarkable fallout is registered in the further deterioration in relations between the US and its international allies. 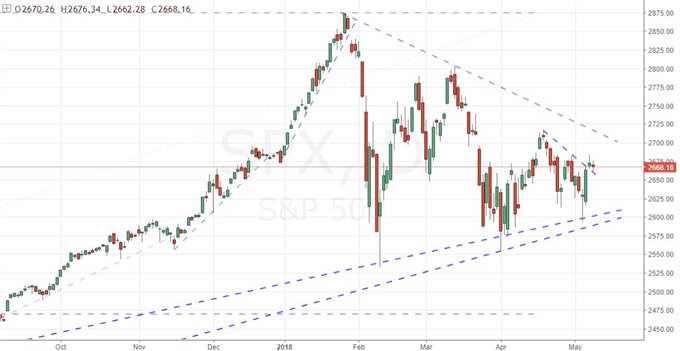 In the standard book for interpreting what impact this development would have for oil, we would normally expect sanctions to translate into an artificial supply restriction which would in turn lift the commodity's price. This would seem 'ideal' timing for such an announcement with US-based WTI at a three-and-a-half year high and staring down the mid-point of its 2011-2016 range around 70.50. That said, we have yet to see a renewed bull trend much less the technical break that would usher the next step forward. Over the past months and even years, we have seen the academic dynamics of supply and demand lose sway over trends. With the oil market often discounting OPEC's concerted production constraint efforts and the US ramping up its own production, the traditional influences have warped. That said, there is still plenty of volatility in response to the headlines. Intraday price action on crude was erratic and the end-of-day rally left us with the biggest lower wick on a daily candle since October 2014. 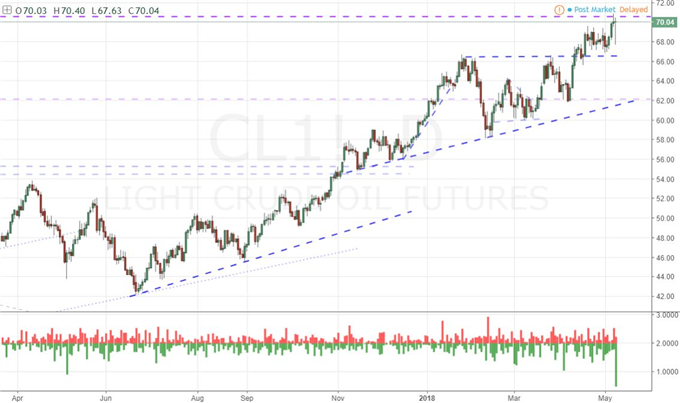 Where oil found some consistency in volatility where general trend response fell short of expectations, we wouldn't even see a boost in activity for the US Dollar and broader risk trends Tuesday. That said, we shouldn't consider the stoic response from these benchmark assets/asset classes as evidence that it 'doesn't matter'. The reality is quite the opposite. The United States has broke another line of diplomacy with direct allies (UK, Germany, France) as well as economic and political competitors (China and Russia). For global capital markets, this only further throws grit into the normal operation of speculative markets that have grown exceptionally dependent on complacency to compensate for the underwhelming outlook for growth and investment returns. And, this is not a situation where the US simply benefits at the expense of its counterparts. The world's largest economy continues to withdrawal from the global flow of capital which further encourages its trade partners to diversify to alternatives to meet economic, financial and commodity needs. That said, this is a long-term loss of value and place. So long as nothing disrupts the immediate status quo, the 'path of least resistance' seems to be unwinding the aggressive net short speculative position behind the Dollar. 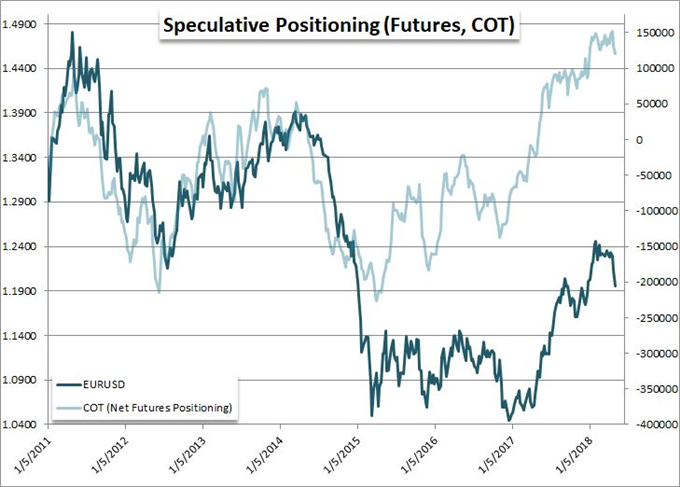 Technical and Fundamental Developments for the Australian, New Zealand and Canadian Dollars

While themes continue to make course adjustments on high minded trends like that for risk assets and the Dollar, there are more discrete developments around the global markets that are ending and starting trends elsewhere. There are quite a few developments unfolding for example with the 'Commodity Bloc' currencies. For the Canadian Dollar, the oil wobble and ongoing NAFTA negotiations matter; but it is the technical development that draws my attention. An equally-weighted CAD index again offers the tentative signs of a turn following a productive, one-sided run. We get more into the intermediate fundamental realm with the likes of the Australian Dollar. The disappointing retail sales report from the country seemed to override any encouragement registered through the rebound in the Chinese trade surplus for April. Pairs like AUD/USD have been pushed even further underwater, but a general comparison of conditions without the inference to Australia itself, suggests this currency is heavily discounted from essentially equivalent counterparts. It is the New Zealand Dollar that faces the most pressing and definitive event risk ahead. This is another currency that is fundamentally discounted despite generally familiar afflictions, but the the RBNZ rate decision can spark a skewed response with the right outcome. We look at the various AUD, NZD and CAD pairs and their opportunities as well as the big picture themes in today's Trading Video. 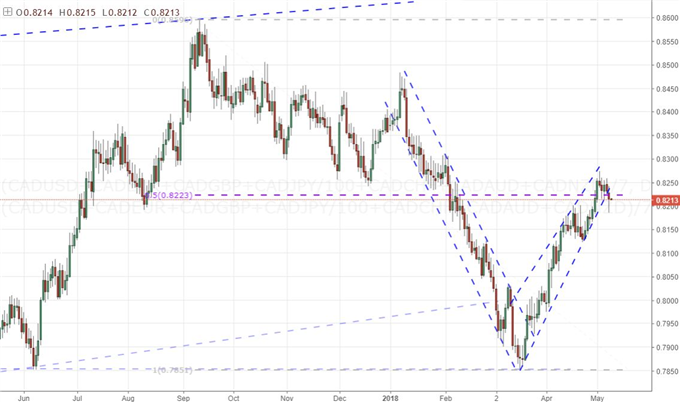