A Strong End to a Troubled Week for Equities

Friday's charge for US equities was undoubtedly impressive. The final session's rally proved the best daily performance for the benchmark S&P 500 in a month. Yet, that is about as remarkable a milestone as the single-day's performance would register. This same baseline for the US shares market and 'risk trends' in general still closed the week lower. Furthermore, the intra-week volatility has not discharged us from the trouble we have seen develop since February's dramatic tumble. We have still produced lower highs as the recovery efforts have stalled out earlier and earlier. Volatility is still a lingering threat following 2017's remarkable stoic environment that drew so much free capital in. Then there is the general issue where an otherwise complacent market previously fueled by passive investment that conveniently overlooked fundamental concerns is no longer producing the capital gains that investors have been so dependent on with income returns still near record lows. In other words, it is important not to base big picture views on a single day's rally or a bombastic headline like Apple's $100 billion share buyback plan. With so much anticipation and premium already factored in, the cost to sustain lift is far more dear. 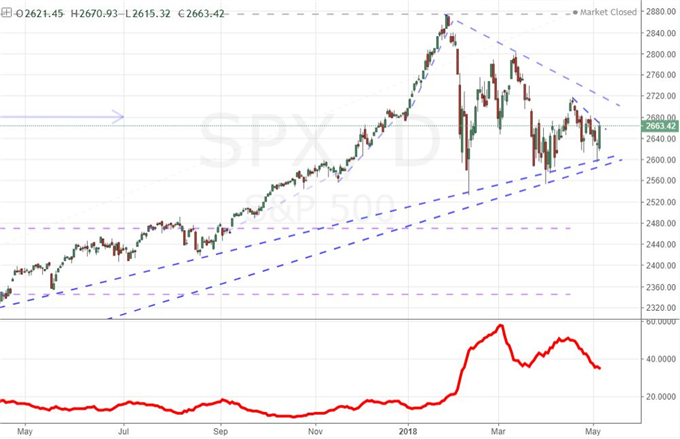 Themes and Events that Can Spur Global Risk Trends

The top headline from Friday's session seemed to offer some degree of enthusiasm to the US equity bounce. The April labor report from the United States was a mix. The nonfarm payrolls (NFPs) actually fell short of expectations at 164,000 net jobs added but the jobless rate's slide to 3.9 percent brought unemployment to its lowest level since 2000. Overall, this is an encouraging mix of data, but it doesn't meaningfully change the course of the labor market as an economic engine or foundation for monetary policy. Given the limited scope of this data, we should monitor the sparks for deeper themes in the week ahead. Risk trends are the undisputed king for motivating markets, but it is often outcome rather than catalyst. Capable of altering this deep current are developments around trade (US-China or US-EU) and political stability. Both have proven active themes while neither has offered much in the way of express dates and events. Perhaps next weekend's Iran Nuclear Deal deadline is the most explicit. 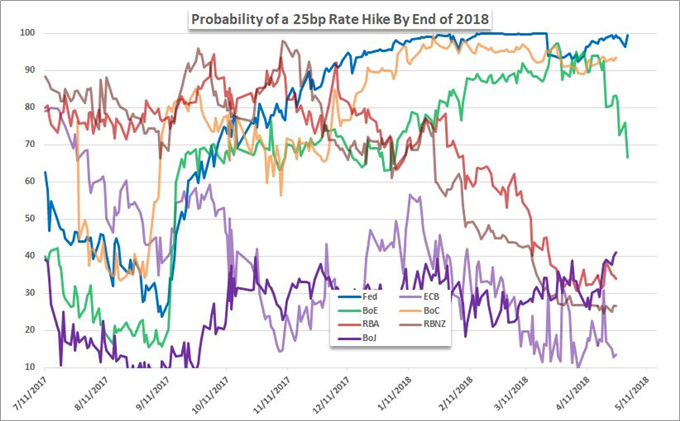 The US labor data that closed out the past week carried just as much interest for the Dollar as it did the S&P 500 - though it proved just as limited in its capacity to redefine trends. The most notable update from the run of statistics was the downtick in wage growth as inflation is the critical ingredient to the Fed's tempo of monetary policy normalization. That said, the 2.6 percent clip is still running smoothly enough to justify two additional hikes - and maintain debate of three - in 2018 if everything else is on point. The DXY Dollar Index wavered somewhat Friday, but ultimately closed out the week remarkably strong. A tentative recovery is still unfolding for this benchmark that can continue through passive means like the correction from an excessive short position. However, it is better served by active catalysts to carry it along. The US docket ahead offers up CPI and the University of Michigan's consumer confidence report, but the more capable motivator for USD gains would be continued losses from the collective of the Euro, Pound and Yen. 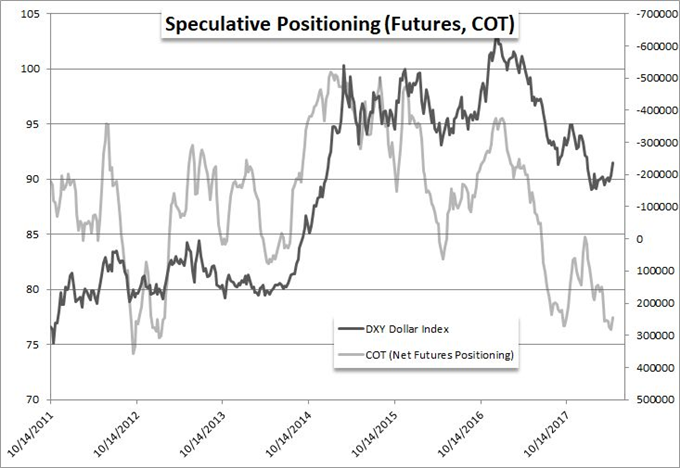 Key Event Risk from Outside the US Sphere of Influence

US matters tend to result in global market response, however, that isn't always the course of influence. While political risks like internal executive branch strife and troubled trade negotiations out of the US are matters to closely monitor ahead, there are more distinct events on other economic dockets. Top event risk in the week ahead goes to the Bank of England's rate decision. This is a meeting where we are offered a policy decision, the Governor's remarks and the Quarterly Inflation report (Super Thursday). With impressive moves like those from GBP/USD and GBP/AUD or setups like GBP/JPY and GBP/NZD, this can prove important event risk. As far as monetary policy, the Euro will find the ECB's Economic Bulletin while the Yen has the BoJ's Summary of Opinions. The RBNZ rate decision should be watched closely as the Kiwi Dollar is already assumed to be unmoved by this event, which lowers the market's guard. We discuss all of this and more in the weekend Trading Video.