Retail traders have flipped to a net long EUR/USD position for the first time in months despite the Greenback winning noteworthy bullish breaks against other major counterparts. Keep an eye on this positioning on an intraday basisusing the DailyFX speculative positioning data on the sentiment page.

S&P 500 and Dow Suffer Another Wave of Nausea

Equities had fallen out of the spotlight as of late after the bullish breakout by the Dow and other key US indices failed to turn into a lasting trend. That failure further eroded interest when the subsequent retracement punched holes in the technical influence that the supposedly critical levels could have represented. Yet, these benchmarks for 'risk trends' wouldn't leave the headlines for very long. This past session, an uneven performance of speculative assets found a clear conduit for bearish believes in the US equity market as pressure held through much of the New York trading session. The single-day loss for the likes of the S&P 500 was one of the largest in weeks and the Dow has now notched its first five-day decline in 13 months. Yet, there is still a buffer before we get to the truly critical levels of support for these indices. And that suits the fundamental backdrop well. We should not place our conviction in a full unwinding of speculative interests on simple technical levels - even from trendsetters as prominent as these and on milestones with years of weight behind them. True speculative intent will be found in a universal need to abandon an overleveraged global market and economy.

Over the past week, the Dollar has been the most prominent story for the financial system. Having been relegated to a frustrating range for more than three months, the accelerating climb for the currency had raised hopes that we could hit breakout velocity. The technical clearance made by key pairs from USD/JPY to GBP/USD to AUD/USD only furthered the anticipation and laid the seeds for speculation of a long-term trend to swing a year-long move in the opposite direction. Yet, the critical milestone has not been passed. While a number of Dollar-based pairs have secured impressive moves, the world's most liquid currency pair - and arguably the most liquid asset overall - EUR/USD notably did not drop below 1.2175/25. From a chart perspective, that range is not only the general low of the past three months; it is also the confluence of midpoints for the 2014-2017 and the Euro's lifetime range. Considering that boundary, it is less surprising to see the DXY Dollar Index waffling as 91 stands above. Technical progress alone will not carry a full Dollar bull trend; but it is a necessary start.

Trade Concerns Revived to Spice Up a Monetary Policy Week

The fundamental theme for this week from scheduled event risk was heavily centered on monetary policy. Two of the top events on the global docket are the ECB and BoJ rate decisions due on Thursday and Friday respectively. As the most dovish major central banks, the decisions these two groups make will carry crucial influence over the perception of universal policy and subsequently the risk trends that have been built upon that temporary foundation. Even the other data-based events are readily aligned back to a monetary policy view. The Australian 1Q CPI update is an obvious link, but so too are the US consumer sentiment survey and US, UK 1Q GDP readings crucial litmus test for making decisions on policy months forward. Yet, this isn't the only theme in play. It isn't difficult to revive interest (even fear) in concerns like trade wars. US President Trump finds himself again dangerously close to doing just that. This past session, he voiced optimism that deals could be reached on NAFTA and China (with Treasury Secretary Mnuchin due to travel to China); but an offhanded remark about the relationship with the EU after talking to France's Macron carries misgivings.

It is important to follow where the volatility is bubbling over and to keep close tabs on the dominant players in the financial system (Dollar, US equity indices, Treasury yields, etc); but don't analyze these markets at the expense of ignoring other less active opportunities. With the Dollar's recent rally, an outsized impact has been registered by emerging market currencies. The moves for USD/ZAR, USD/BRL and others may not move EUR/USD, but they can reflect an early signal that risk trends are shifting away from risky carry. Then there is the Chinese Yuan which has notably shown extremely little movement versus the Dollar despite the opportunity USD appreciation could have afforded the Chinese authority. Among the majors, the Pound has eased up from its slide versus the Dollar and other key crosses, but it is still trading at excessive levels and fundamental issues related to Brexit and BoE forecasts. On the opposite end of the spectrum, no rate expectations have been lifted for the Aussie Dollar after the CPI, but the currency itself is still remarkably low with everything considered on a fundamental spectrum. We discuss all of this and more in today's Trading Video. 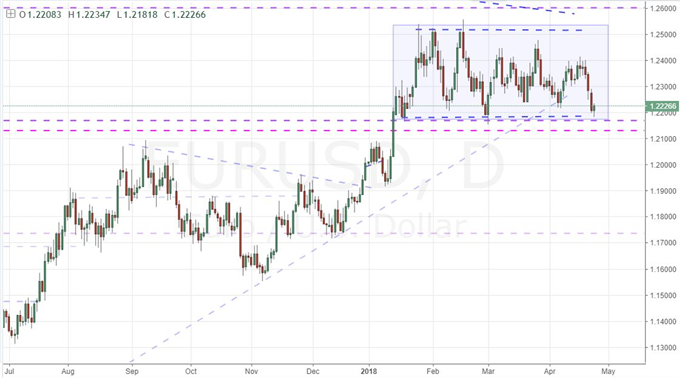 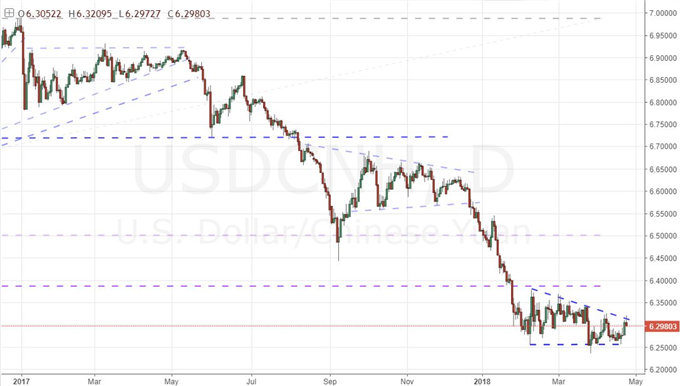