Dollar Eyes 2017 Bear Trend Reversal, But Does it Have the Motivation?

•US equities showed risk trends were still groping for direction, but interest is buoyed after strong Google earnings after-hours

•In a rare turn, the FX market topped financial headlines with a strong Dollar climb which inspired after-the-fact reasoning

•While USD/JPY, AUD/USD and GBP/USD have posted varying weight technical breaks, both EUR/USD and DXY are within range

See how retail traders are positioning in all the Dollar-based majors, indices and US Oil on an intraday basis using the DailyFX speculative positioning data on the sentiment page.

The alpha and omega of genuine trends in the financial market is risk trends. There are few other all-consuming influences that can reasonable take hold of all markets across all regions for an extended period of time. The previous quarter raised the awareness of risk trends with the surge of volatility that still lingers today, but traders are still willing to believe in the status-quo climb that was founded more on complacency in an era of extreme monetary policy. That was the initial interest for bulls last week when weeks of congestion on benchmarks like the Dow and S&P 500 finally broke higher following the strong earnings report by tech giant Netflix. Yet, that move didn't stick and the indices painfully lost lift and eventually crashed back below the critical technical levels that signaled the break by Friday. To start this week, those failed tehnical initiatives were once again haunting the increasingly desperate hold outs. An initial gap higher for US indices and strong performance for European shares didn't translate to follow through recovery for US benchmarks or a consistent climb for other risk assets. The longer the markets have to think about the balance of value, the more they will recognize stretched levels we currently reside at and the greater the risk that we start to turn systemically. 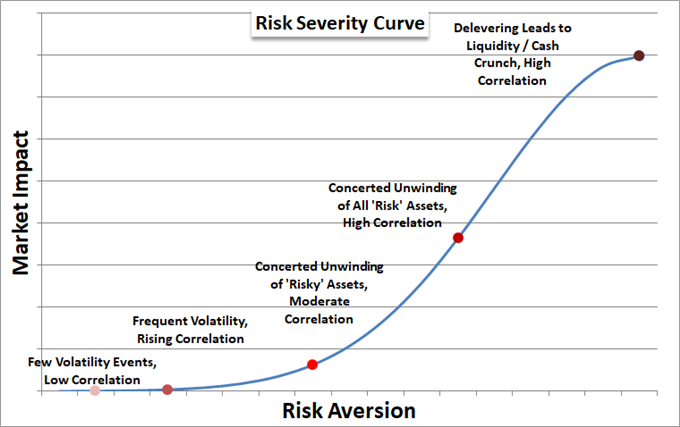 Recently, the top headlines for global markets news has been dedicated to the back and forth in equities - especially with the reawakening of volatility. Yet, that wasn't the case this past session. The most remarkable move was reserved for a currency that has been stuck to a well-formed range for the past three months: the Dollar. Extending an already impressive move from the past week, the Greenback stretched its advance to a fifth consecutive session which is one of the strongest moves for the benchmark currency dating back to November 2016 back when the currency was still sporting a larger bull trend. Looking to some of the benchmark pairs, there were clear breakouts in favor of the Dollar. The USD/JPY's was the most dramatic as it fit the bill for an inverse head-and-shoulders pattern looking to turn 2018's strong bearish wave. A bearish trend break from AUD/USD has more time behind it as the support stretches back to the start of 2016, but the breach doesn't carry the gravitas of a self-sustaining move like the Yen pair. GBP/USD similarly has the technical appeal but the scope is far more reserved than the previously mentioned two. Notably, neither EUR/USD nor the ICE's Dollar Index have cleared their crucial levels. 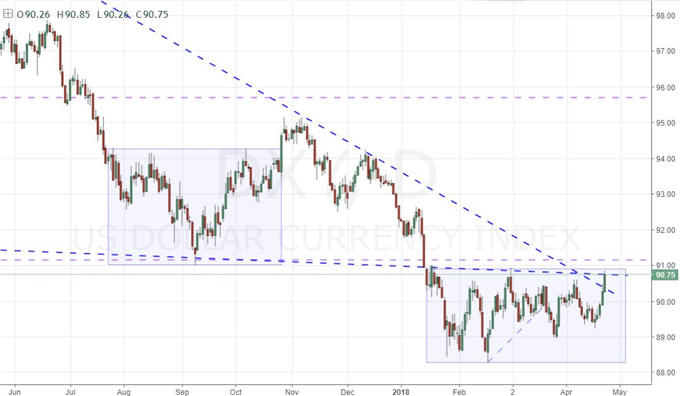 The Fundamentals Supporting the Greenback Not Yet Self-Sustaining

There are always leaders and laggards when it comes to a wide, interconnected market. We may certainly find the USD/JPY, AUD/USD and Cable signal the start of a broader Dollar recovery; but we should put those expectations to a reasonable test of conviction. Technical achievements are one thing, but they rarely muster the kind of true conviction that single-handedly affords trend - much less a key reversal. This is especially true as liquidity increases and the weight of market participants that do not covet charts (central banks, major financial institutions, funds) garners greater and greater sway. And, even if the milestone Dollar measures break their ceilings, it doesn't assure trend. We need something to reinforce demand. And, so far, there isn't much to stoke that kind of appetite. Much was made over rate expectations and the 10-year Treasury yield reaching 3.00 percent, but why would those be drivers now and not the months that they have been climbing before? If fears of trade wars and political risks are easing, we have an argument that markets are at a discount; but the currency hasn't really lost ground since these issues have really started to increase. 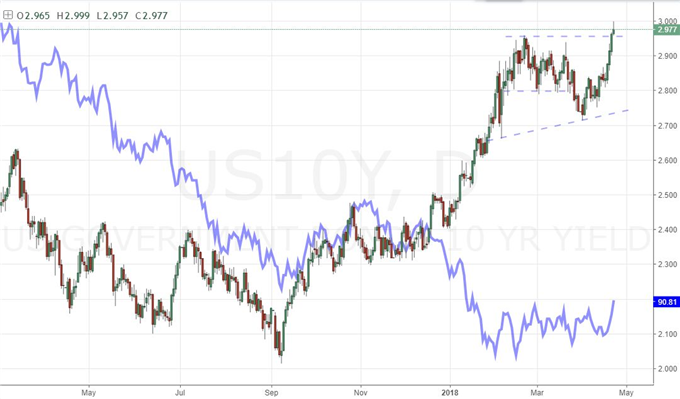 Outside of the Dollar's and general risk trend's orbit, there is a notable distrubance in the monetary policy balance - though more through unintentional correlation. As we watch EUR/USD for its Dollar implications at the floor of its 1.2600 - 1.2150 range, there is the meaningful question mark over the ECB rate decision later this week. The central bank is making a not-to-subtle aim at deflating the currency; but will it work. Furthermore, if the ECB is going to try to take the air out of the Euro, what does this mean for the SNB given their primary interest in years of monetary policy was seeing EUR/CHF rise? Meanwhile, the Bank of Canada's Poloz and Wilkins were testifying and there was a notable dovish reservation to their otherwise confident stance on the economy and housing. That doesn't bode well for the Loonie's lift in part with a backdrop to a more than 90 percent probability priced in for another hike in 2018. Then there is the traditional event risk route. The Australian Dollar may yet find the glimmer of hope for a return to nomralized policy in inflation if 1Q CPI shows it is on the horizon, yet don't front run that assumption. We discuss all of this and more in today's Trading Video. 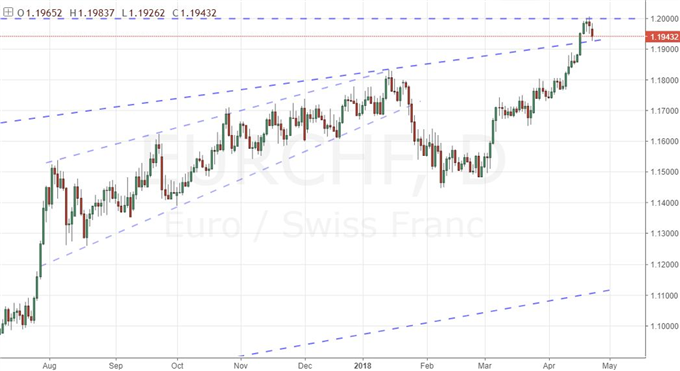