S&P 500 Brings Risk Aversion Before Liquidity Even Fills Out

See how retail traders are positioning in the S&P 500, Dow Jones Industrial Average and other benchmarks of the global financial system on an intraday basis using the DailyFX speculative positioning data on the sentiment page.

US Markets Override the Liquidity Dampers

Monday was 'supposed' to be a quiet session. With Europe and many Asian financial centers offline for the extended holiday weekend, there was really only the US markets open for trade. As large as the US is for speculative activity, it can't typically build sustained systemic capital flows all on its own. Yet, the downdraft in risk-oriented assets running during the New York session experienced a remarkably aggressive dive - and not just relative to the conditions. Though they would clawback some of the deep losses at the extreme of the day, the Dow, S&P 500 and Nasdaq suffered one of the (fourth) largest single-day losses in 18 months. These were moves comparable to February's and March's peak declines. The question now is whether this unexpected start to the new quarter will spread to the rest of the world and prove a troubling durable change in global confidence. 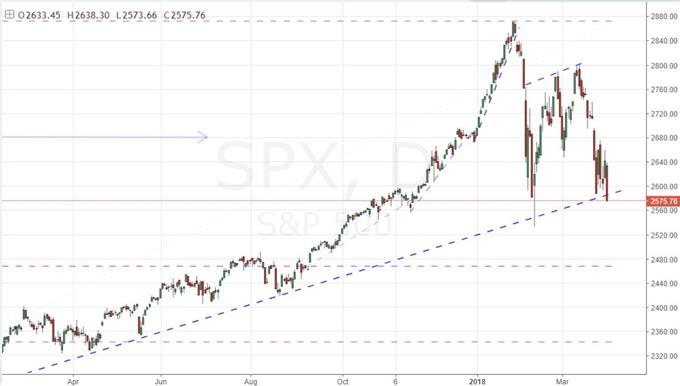 As far as influence goes, the technical cues for the US indices were significant. Beyond the intensity of the day's loss, the Nasdaq 100 slipped a trendline support that dates back to June 2016. The Dow notably tagged its 200-day moving average and reinforced a 'neckline' for a head-and-shoulders pattern around 23,500, but the critical break was not made. The S&P 500 earned the day's most impressive development. My preferred signal for an imperfect and heavily-skewed risk benchmark closed below the 200 day moving average for the first time in 448 trading days - ending one of the most persistent bullish trends by this measure in decades. It would also register as another 10 percent retreat from record highs - only 35 trading days since the last similar milestone there. Yet, here too, the S&P 500 breaking support dating back to the Presidential election is up for dispute. Nor would I even consider such a technical cue alone a high probability signal for a true reversal on sentiment. That said, the evidence of such a deep shift is building. Two major bear swings in two months, a notable capital outflow from speculative funds and a greater sensitivity to 'negative' news are collectively signalling a shift is underway. 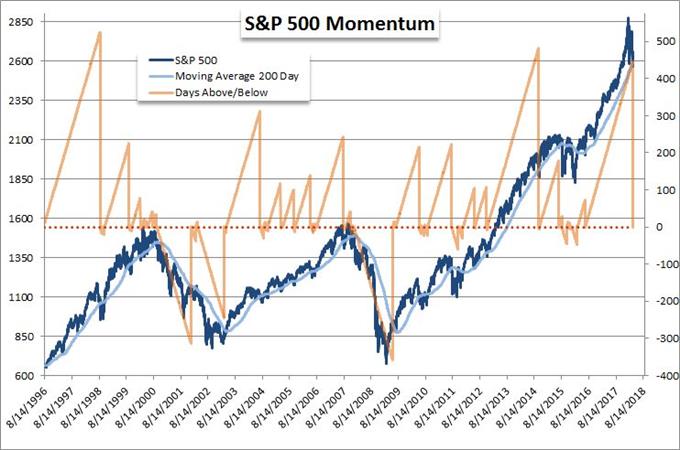 A Remarkable Contrast Between S&P 500 and the Dollar

Where the S&P 500 exhibited remarkable volatility and has cleared a remarkable technical milestone, the US Dollar was virtually unmoved on the day Monday. In fact, the three-day ATR (average true range as a simple measure of volatility) offered the lowest reading since the December holiday and the weakest signal outside year-end periods since August 2014. Inactivity is perhaps not surprising against the backdrop of global liquidity, but it is considering the level of activity for capital markets in the US. The Greenback is often considered a safe haven in contrast to high-risk equities, but its sensitivity at the opposite end of this spectrum has been dampened by the Fed's efforts to normalize its extreme monetary policy well before its major peers. That has seen the correlation between DXY and SPX wax and wane over the past three to four years. Yet, if the Dollar didn't slide in sympathy to equities Monday, perhaps it signals that much of the speculative leverage behind the Dollar being a first mover for rates has been bled off by its losses since the beginning of 2017. 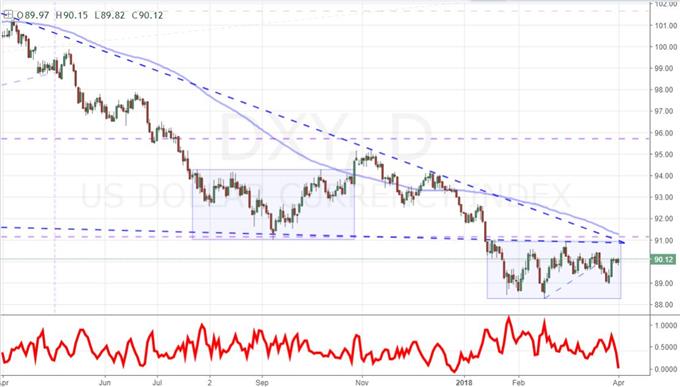 When Data Moves the Market and When It Doesn't: RBA and NFPs

The next 24 to 48 hours will be critical for global traders. We will see if the worrying signal sent out by US markets Monday is an isolated event or a signal for something more systemic. While many will be looking primarily for technical milestones to make their evaluation, I would suggest also looking to the sway that fundamental events and themes carries over the market. That is not necessarily to say it is fully dependent on a tide change such that economic and financial conditions continually worsen, but rather how the markets respond to the developments and current. If positive news generates less and less enthusiasm while the negative headlines trigger a starker fear response, it will be a strong signal of our conditions. I see such symmetry playing a role in two key events ahead: the RBA decision and NFPs. The latter is due Friday but is already drawing traders' attention. The rate decision in the meantime is already billed as a dovish, complacent event. Yet, that creates clear presumptions and significant discount which lowers the bar to a more significant Aussie Dollar response as pairs like AUD/USD, EUR/AUD and GBP/AUD press extremes. We discuss all of this and more in today's Trading Video.