•The S&P 500 led robust bounce in US risk trends to start the week, starting with the biggest bullish gap since November 2008

•Reports that US and Chinese teams are negoatiating trade isn't surprising, but does it inspire confidence for avoiding trade wars?

•Highlights of a stretched Euro and Pound, advance from gold, possible double top in oil and crypto slide are covered

Though it was not an evenly distributed rebound - and certainly not for intensity - there was a notable bounce in sentiment registered in risk-oriented markets Monday. Leading the charge were US equity indices. Following the worst week in two years through this past Friday, Monday's rebound was represented one of the strongest rallies in the same historical context. Looking more closely at the session's performance, just as remarkable as the total change itself was the open. The gap higher from Friday's lose to start the day and week was the largest bullish gap from benchmark S&P 500 since November 2008. That is remarkable. Looking for comparable scenarios, you don't see bullish opens matching or beating this 1.2 percent jump without registering the relative position for where we were in the surrounding cycles. The only two instances that register this kind of impact in the past decades are in late 2008 and early 2003 - coming at the end of long and painful bear phases and preceding impressive recoveries. Naturally, the question arises whether this is a reversal signal. I wouldn't take two data points at face value - especially considering this clearly hasn't taken root after significant declines. 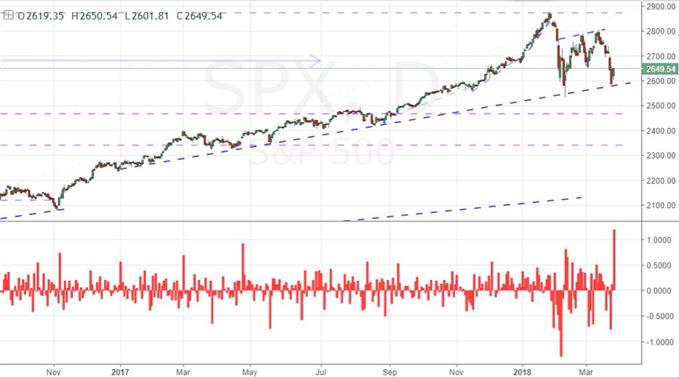 Are Trade Wars Resolved and Are They the Only Risk?

Naturally, since the rise of trade wars has played a significant role in the shift in sentiment as of late - at least one would assume given how much time they afforded in the headlines with dire forecasts - it would seem a rebound indicates the fundamental risks have been righted. If we were looking for evidence to that transition, we could find it in reports that US and Chinese trade officials are negotiating following the President Trump's signing the executive memorandum introducing a $60 billion tariff on the world's second largest economy (the FT report was heavily referenced). Discussions are encouraging, but the engagement has already started. And, this is not something that can so easily be put back to the unsteady complacency that preceded our recent unsettling. Even if China replies accommodatively, the US is still raising trade barriers to collective growth and capital circulation around the world. There was a short-term sign that this is perhaps a threat that will not readily disappear in the uneven performance of global shares and other risk assets. What is most systemically disruptive though is the persistence of volatility. More erratic markets can just as readily take dramatic moves lowers as they can higher. 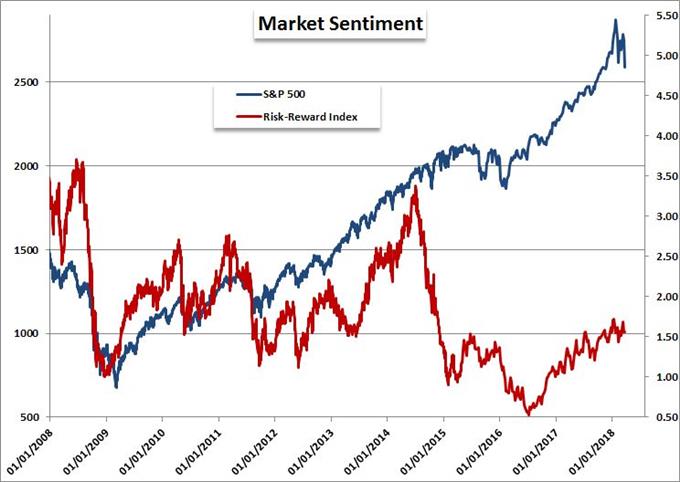 Another feature of the global financial landscape that offers lingering uncertainty with trade is the lack of a response from the Dollar. If trade wars were in fact a concern that was fading to the backdrop, we would expect the currency at the center of it all to recover lost ground. It instead continued its slide from last week. That isn't the only interesting FX player to register for fundamental and technical developments though. While major counterparts to the Dollar, the collective strength of the Euro and Pound come in significant contrast to their respective fundamental bearings between over-indulgent rate speculation and Brexit confidence respectively. For the Canadian Dollar, the opposite issue arises, an overly aggressive slide amid its exposure to tariffs and a fading rate forecast. Losing ground is reasonable, but that much is perhaps excessive. Finally, we have the Swiss franc. Nothing may look out of sorts with a pair like EUR/CHF, but when you make an equally weighted index of the CHF, something very unusual becomes clear. 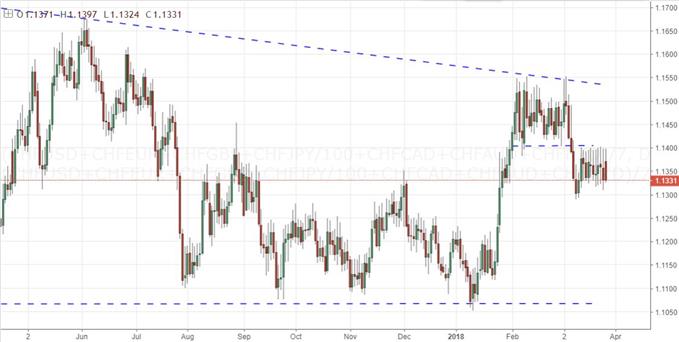 There is little doubt that key commodities are reflecting the same influences of risk trends and trade wars as financial products. It is interesting therefore that both the growth-centric oil and safe haven gold are both approaching meaningful highs. Oil prices are suggesting a double top could be attempted with the headlines of the Saudi envoy to the United States running their course. In reality, this commodity has a strong habit of returning to congestion. As for the precious metal, multi-year resistance is in sight which seems to contradict the haven appeal that stands as the market's underlying role in the financial system. From long-standing metal to emergent cryptocurrency; there was a uniform slip from the likes of Bitcoin, Etherium, Litecoin and more Monday. This was not risk-centric but rather a unique development for the new asset class. Joining Facebook and Google (with YouTube), Twitter announced they would ban most crypto ads in the near future. While this will no doubt leave open spots for legitimate coins and interest, there is a need for massive capital influx to afford the market the weight and stabilization that is expected of an asset expected to compete with currencies in the future. We discuss all of this and more in today's Trading Video. 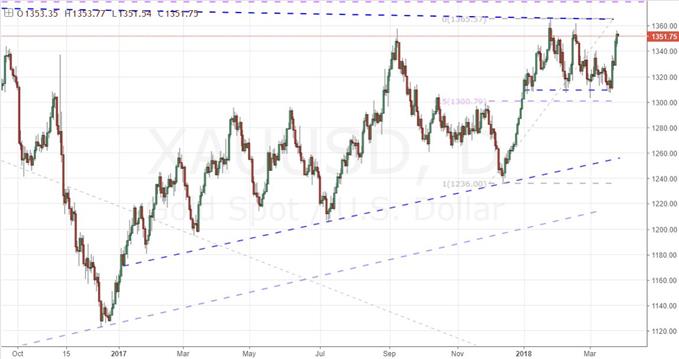