G20 and Trade Wars Draw Traders' Attention but Not Conviction

We ended this past week with a general concern over the state of global trade and the seemingly relentless move towards protectionism or event an outright trade war if conditions aren't managed. We kick off the new trading period with the same topic of conversation. Given how universal the threat the move away from globalization would be, it comes as no surprise that many global leaders were weighing in. Members of the G20 in particularly found the opportunity and need to address the pitfalls of isolationism at the first day of their two-day summit. Those who spoke on the sidelines clearly avoided signaling confidence in a single view from the group, but there was a general sense of concern to arise from remarks. It seemed boilerplate to offer 'confidence' that they would strike a collaborative position across members, but that optimism was punctuated by statements of uncertainty and even some threats that retaliation would come swiftly if protectionist agendas were pursued. 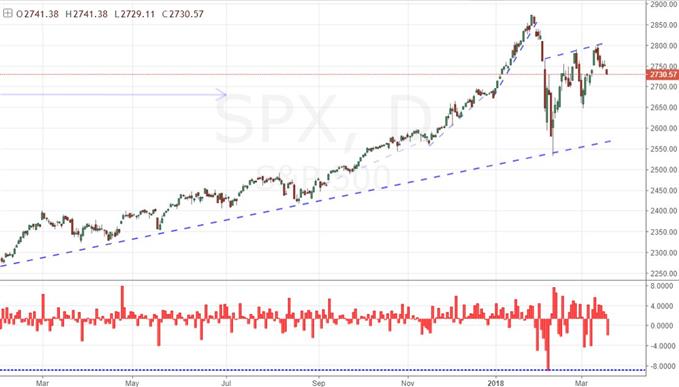 With the risk of trade wars still in the winds, we saw a more explicit shift in sentiment through capital markets to open the trading week. Last week, there was a slide from benchmarks like US indices, but they held off from critical breaks and there was a remarkably seven consecutive days of gaps higher on the open. That hedged optimism was abandoned Monday. The S&P 500 led the US stock measures with a gap lower on the open with a substantial slide thereafter through the active trading session. That would result in a clear break below 2,750 with similar technical pictures for the Nasdaq and Dow. Global indices offered up similar declines but in different states: DAX dropping into a broader range, FTSE 100 hitting a 15-month low and Nikkei 225 leveling up to trendline support. Risk assets may not look particularly similar over the past weeks and months, but recent correlation indicates a strong focus. The end of the G20 summit Tuesday will offer us the official communique where wording will be an extremely important indicator of trade relations. Expect this to be an important factor in risk trends...but not the sustained signal for the future.

Pound Rallies a UK and EU Mark Progress on Brexit

Few themes can muscle attention in the markets away from the status of impending trade wars, but particularly robust influences can at the very least generate significant short-term tractions. That was the case with the Pound Monday. The Sterling has already recovered significant lost ground since its post-Brexit low in October 2016, but there is still discount to work off. The question is how much fear is still priced in that can be lifted by the current state of the relationship between the UK and EU? Following concern over the draft rejections from each side of the negotiation table these past few weeks, weekend discussions seemed to result in progress for the two sides for an extension of the transition period. This hardly resolves all the lingering uncertainties, but it is much-needed compromise that can feed optimism. The Pound responded appropriately with its equally-weighted index moving to 21-month highs. GBP/USD pushed higher, GBP/JPY put the previous bearish trendline break in jeopardy and EUR/GBP moved towards its range low. Certain pairs like GBP/AUD are extending more remarkable moves. 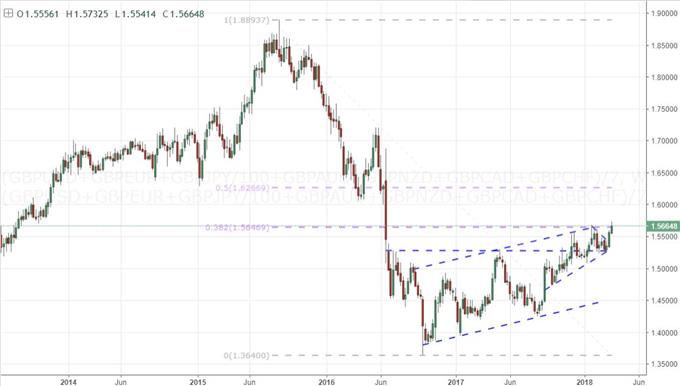 Manage Expectations for Events and Data Ahead - Including the FOMC

As we move forward in the week, there will be other fundamental milestones ranging from important indicators to more significant themes (like Brexit) that will vie for control over the market. However, all of its should be put into context over overlapping and overwhelming trade winds. The G20 will offer an official communique on protectionism, but it is highly unlikely to put to bed the concerns that have grown particularly acute with the United States' push to engage. We will not see a definitive next stage for motivation to escalate or de-escalate by world powers until Friday when the grace period to the US steel and aluminum tariffs ends with a list of those exempt and those that aren't. That means in the meantime, events like the Fed, BoE, RBNZ rate decisions; PMIs as proxies to GDP; the EU leaders summit and more will offer potential for future moves and/or volatility. Yet, committed and unrestricted movement will likely await until the critical hurdle at week's end is surpassed. We discuss the state of these markets in today's Trading Video. 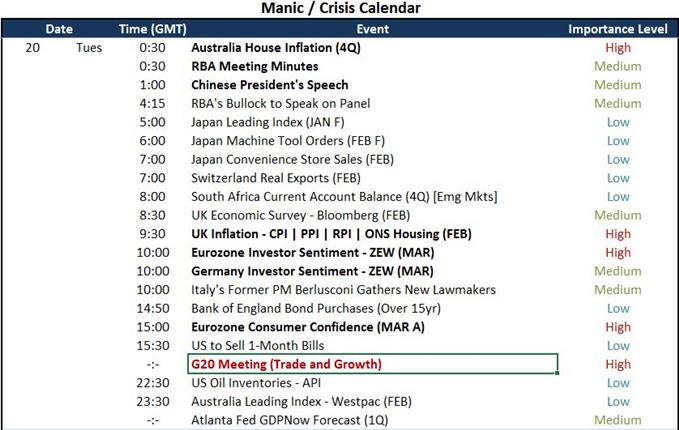