Trade Wars Now an Anchor Rather Than Driver for Indices, Dollar

Trade War Thunder Rumbles but In the Distance

The throb from trade war threats these past weeks is still causing the wider market serious anxiety, but it isn't providing a definitive course for sentiment - for better or worse. Though President Trump's order on steel and aluminum tariffs wasn't nearly as definitive as threatened heading into the signing ceremony, it still leaves open prominent threats that may yet lead us into a period of steady escalation that curbs global capital flow and uniformly cuts GDP. With the 15 day grace period the President gave for trade partners to make a case to escape the onerous taxes, there is a meaningful chance that the threat may completely evaporate or alternatively be enforced with oppressive force with a simple delay. Naturally, having conviction for the next phase for already-expensive capital markets carries the exceptional risks and uncertainty of a world leader who has a habit of changing tack on a whim. Naturally, benchmarks like the S&P 500, Dow, global indices, emerging market aggregates and the like will be throttles by this uncertainty. A narrow range Monday was fitting on this backdrop. But, if we start to see a speculative run arise with uncertainty still in place, be wary of how long and far it stretches. 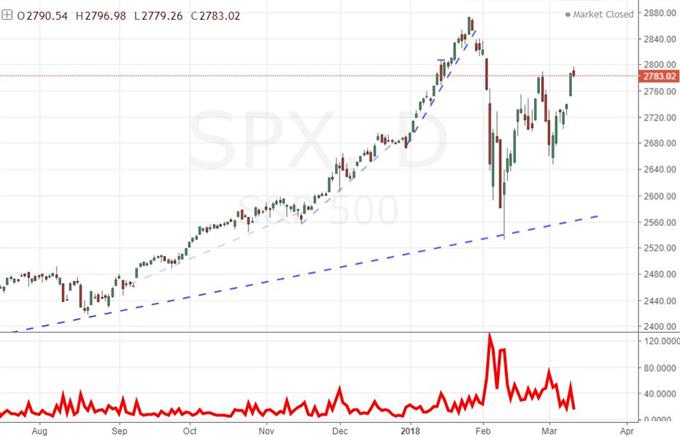 The Trouble With Moving the Dollar Through Rate Forecasts and CPI

Risk trends are naturally unsettled by the threat of possible trade wars in the future, but it also makes sense that the US Dollar would suffer the same sense of uncertainty for course and conviction. While the US is the instigator in this material escalation to outright trade conflict, it certainly doesn't escape the true risk from this path: retaliation. The European Union, China and other large trade partners have issued their warnings that taxes on their exports to the US will be met with equivalently painful levies on US goods imported should they be imposed. Yet, there is a chance that the President Trump reverses course or significantly waters down the push by the time the grace period ends. To execute definitive policies before the opening salvo is realized risks ensuring its launch. There is too much at stake for the US Dollar as the world's most heavily used currency for it to readily follow another fundamental theme - short of a full-scale swing in global risk trends - until this is resolved. That sets the tone for the pick up in monetary policy interest over the next few weeks. Today, the US CPI due; and as the market's favorite inflation indicator, it can certainly shift rate forecasts. That said, the forecast for a March 21 FOMC hike is nearly certain and debate between 3 and 4 hikes in 2018 too nuanced. Even the Fed decision itself next Wednesday is unlikely to divert our attention from trade wars unless they are somehow resolved before the grace period ends. 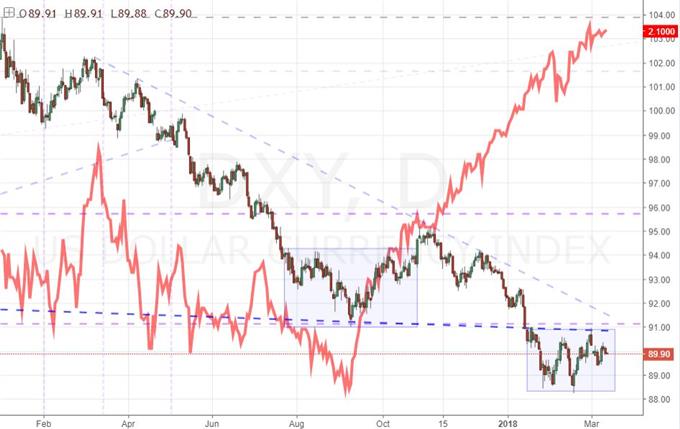 Just as the Dollar has various fundamental themes from which to draw from, it is plenty competing for the attention of other key currencies. Yet, just like the Greenback; it will be very difficult to divert focus away from the trade war concerns ahead. The EU standing ready to respond to the US tariffs is arguably the key to how intense this situation will grow for the world, and the meeting of Eurozone ministers this past session urged against it. Yet, there are other concerns that we need to keep tabs on for the Euro moving forward in the as-yet unresolved government in Italy as well as the intention of the ECB moving forward - which President Draghi may address Wednesday. Don't expect EUR/USD to find conviction easily anytime soon. Meanwhile, Brexit continues to be a more storied weigh on the Pound. Unscheduled for the day, we nevertheless saw the CBI warn against a 'no decision' impact for naturalization of businesses while a survey by a group suggested it could translate into 58 billion pounds in losses for UK and EU exporters. I am still interested in the Canadian Dollar and Swiss Franc as the former has room for rebalance and the other is drifting more on technicals. These are more practical, but certainly not guaranteed. For everything in these markets, caution is paramount. We discuss conditions, risks and opportunities in today's Trading Video. 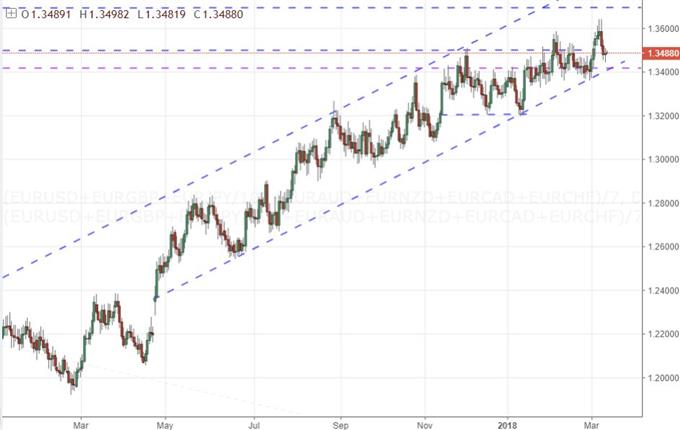