Last week, we ended with trade wars as the most pressing threat to global financial stability. And, if we were to go by market activity, it would seem that that pressure had eased over the weekend. Looking to US equity indices, the S&P 500 and Dow led a notably robust rebound on the day with other risk-sensitive assets following in in tow. Yet, if we took stock of the rhetoric surrounding these troubling theme; the risks have actually grown since last week. Not only has US President Donald Trump not backed down from his threats to implement a 25 percent tariff on all imported steel and 10 percent on all aluminum, but he has further moved on to stake out the response to certain retaliations taken against the United States for such action. In particular, the European Union - one of the largest economies in the world - has said it is ready to respond with various taxes on US goods that it imports. If taken though, President Trump said his next target could be European autos. This is not a situation that seems to be cooling off. Quite the opposite. 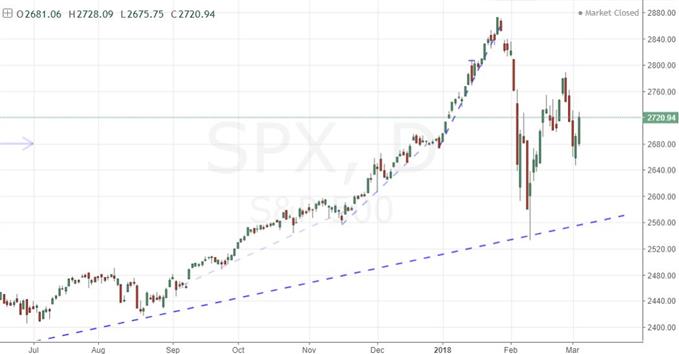 Markets Continue to Dance Along the Edge

So, if the fundamental backdrop has grown increasingly precarious, why are assets attuned to speculative bearings not sliding in a de-escalation of risk exposure? We could have said the same as concerns of moderating growth rose, as global monetary policy started turned towards normalization and previous protectionist shifts were made. This is caught up in the same complacency with which speculators have fallen back on repeatedly over the past months and years. These are not conditions for which maintaining - much less expanding - an excessive risk exposure is wise. Is this evidence to the depths of complacency, confidence that the President will not follow through with his threats, or an assumption that 'trade really doesn't matter that much'? Whether this or another basis, these are exceptionally unrealistic and complacent means of justification for dangerous risk exposure. Traders (and particularly investors) should beware. 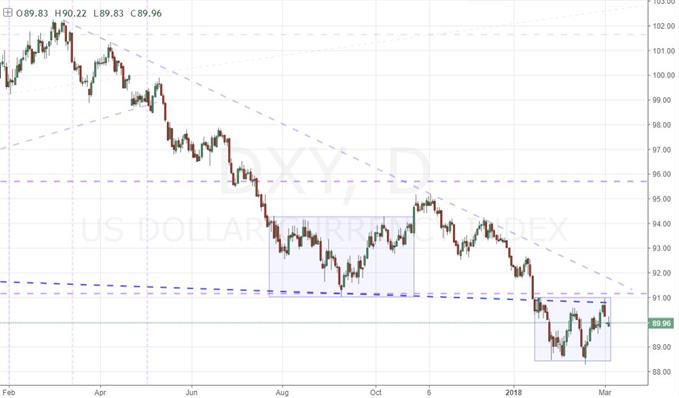 Euro Kicks off Another Protectionist Front

Another key headline and remarkable market restraint to start off the new trading week was the Italian election results and the response from the Euro. As expected, the outcome was inconclusive and ultimately ominous. There was no clear leader among the parties and the mix of possible coalitions were not particularly comforting for European or global markets. The top showing was for EU-skeptic Five-Star Movement with a projected 32 percent of the vote while the ruling Democratic Party lost traction. A former PM Berlusconi brokered center-right coalition comprised of Forza Italia, the far-right League and neo-fascist Brothers of Italy has the biggest share at 35.5 percent. Most of the working governing coalition formations seem to have at least a moderate degree of anti-EU sentiment behind them. Under certain conditions, the sentiment could be extreme. This is a systemic threat to the Euro, and yet the currency remained eerily calm. Perhaps this is in anticipation of the ECB, but that would be very risky hold out for bulls in an already over-optimistic position for the Euro. 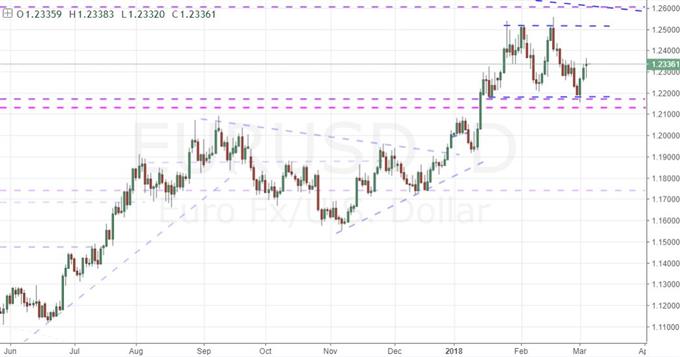 Other Themes and Other Victims

Equities, Dollar and Euro aren't the only assets facing heady fundamental winds. There are equally remarkable themes, events and even more impressive market moves in the global markets. Where tariffs and protectionism seems to be drawing a shrug from many of the assets at the center of the headlines, the Canadian Dollar seems under no illusion that it will be unaffected. With USD/CAD charging through 1.2900 and other Loonie crosses pushing to more remarkable extremes, it is clear to see the market appreciates it is the unfortunate victim to much of these developments. For the Pound, the Brexit uncertainties continue to churn, though conditions are not as positive as the GBP/USD or EUR/GBP seem to insinuate. And, in a week rife in high profile event risk, we continue the run with the RBA rate decision ahead. No change or clear guidance is a decision that stands out in our present backdrop. We discuss all of this and more in today's Trading Video.