Is There Enough Fuel for Global Risk Aversion or Dollar Recovery?

Another Plane for Measuring 'Risk Trends'

There is little doubt that risk aversion jolted the financial markets into the close of the New York trading session Wednesday. The US equity indices were particularly troubled by the shift in sentiment with strong intraday reversals that would leave us with yet another larger 'upper wick' to signal the pain with attempting to inspire the bulls back into form. I am a believer that an individual asset class will not effectively signal underlying sentiment however as it is a universal force. With that being said, there were also measurable losses for the emerging market and junk bond ETFs that trade during the US session. In other words, there was a degree of breadth to the risk appetite. Yet, there also needs to be a measure of duration. Just as surely as risk aversion cannot take root in a single asset, it will not turn into a sweeping fire in a specific region. So, if we are to see true risk aversion, we should expect to see pain carry over to the Asian and European session ahead with a sign that momentum is further building through weeks end. 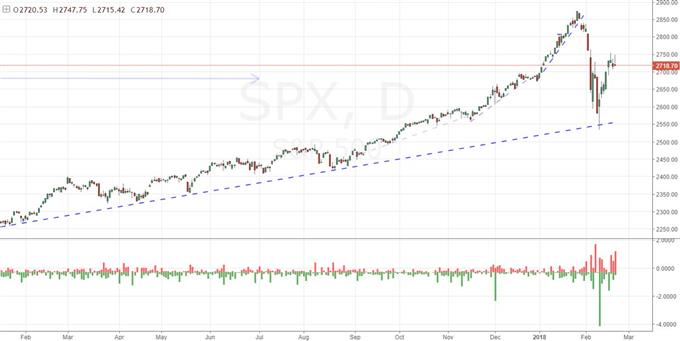 Given that there was a very specific time for the turn in risk trends across the open markets, it would naturally seem that the most prominent event risk during the time was the catalyst. If that is indeed the case, my confidence in this turning into a lasting trend is rather low. Around the time of the stir in sentiment, we had the release of the FOMC minutes from the late-January policy decision. We knew the outcome of that meeting (no change) and even the tone that accompanied it through the statement (passively hawkish). There was certainly more insight to garner from the transcript though - particularly an upgrade in growth forecasts owing to the tax legislation and a slightly more hawkish outlook with the seemingly innocuous 'further' tacked onto the outlook for gradual hikes. I am a firm believer that monetary policy will be a strong contributor and accelerant for the eventual collapse of over-exposed speculative interest. However, it stands as a poor catalyst for the eventual turn. The Fed is already 5 hikes in and forecasting three more in 2018. We know other central banks have capped their dovish expansion or are close to doing so. Why would it be a spark here and now? 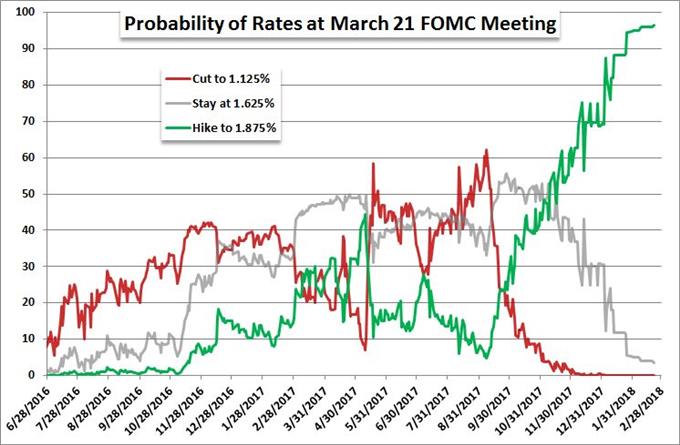 While it certainly connects more readily than a tie to risk trends, the Fed's full statement from its last rate decision is similarly lacking when it comes to motivating the Dollar to a persistent trend. The probability of a rate hike from the central bank at its next meeting (March 21) is over 90 percent according to swaps. There is a near 60 percent chance of three rate hikes through the year according to Fed Fund futures with meaningful anticipation of four (more than 20 percent). In other words, the market is already fully anticipating hikes where the majority of its peers are either dovish or struggling mightily to determine when a subsequent hike can be secured. While there is enough in this event to secure a fourth daily advance for the Dollar and in turn lead EUR/USD to the bottom of its month-long range, the true break and reversal for the Greenback is unlikely. Through the rest of the week, perhaps the Fed's semi-annual monetary policy update to Congress is the only thing that holds that influence on the schedule. 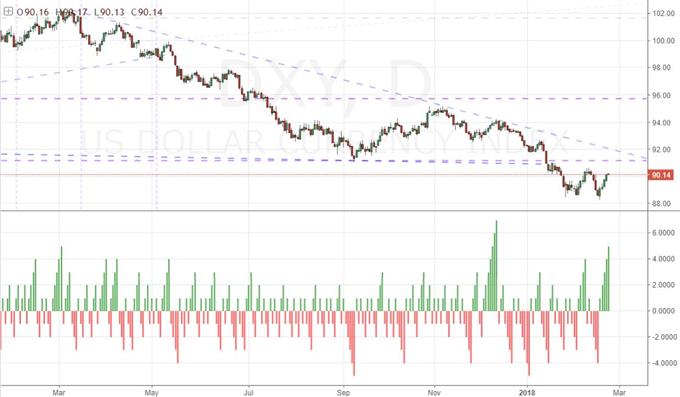 Fundamentals and Technical Cues Ahead

For top event risk over the next 24 hours, the most prominent listing is the ECB's meeting minutes. Recently, the lift from relative political stability and superior economic performance have both been undermined (German coalition government troubles and weak EZ PMIs), but it is very distant monetary policy speculation that has most seeded the Euro's charge through 2017. The ECB has tried to pump the breaks on rate forecasts, but market participants have chosen to ignore the warnings. Eventually, they won't be able to. For technicals, there are many tentative reversals on hand. Not only US indices and the Dollar; but we have seen the Aussie Dollar drop sharply, Gold retreat from $1,360, crude oil sink back after failing $63 and even Bitcoin turn from a moderate trendline like a 'normal' market. We take note of these developments to see what potential is behind them in today's Trading Video. 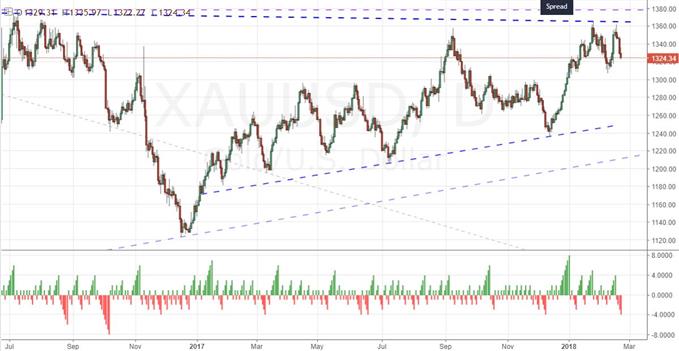