The selling pressure that was so intense to start the week for equities and other risk-sensitive assets was revived this past session. US indices once again paced the bearish slide. Though there were declines registered in sessions earlier in the trading day, the afternoon New York hours provided another painful escalation of risk aversion. Through the end of the day, the Dow 30 and S&P 500 dropped back 4.2 and 3.9 percent respectively with both closing at levels last seen back in November. While these benchmarks' losses were not as intense as the market quake registered Monday, these are arguably even more troubling developments. Rather than fall back on the assumption that the panicked selling to start the week was a flash in the pan that exercised all of the speculative demons, have greater commitment to an unfavorable trend and considerable pace to back it up. 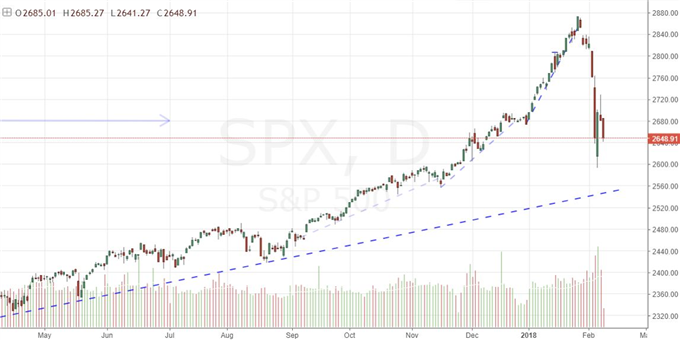 Breadth of Risk Aversion and the VIX

Of course, if we intend to evaluate the sentiment of the entire financial system; a reference to a singular region's equity market simply won't do. Global shares have extended their own pain often with far less relief in a bounce than what the State-side sign posts afforded. The DAX and FTSE100 have speak to different intensity trends while the Nikkei 225 is threatening to dive back below 21,000. Other asset classes offer a similar verdict of a slippery slope in confidence. The EEM emerging market ETF posted a critical trend break with yesterday's dive while the HYG junk bond ETF continue to unfold its head-and-shoulders reversal. Perhaps one of the most important measures to watch moving forward is volatility. The VIX is on pace to rise 200 percent this week - a record that easily outpaces the peak of the Great Financial Crisis. This has in turn created problems for the popular derivatives (futures, options, ETNs) that have be based on this index. There have been claims of trillions of dollars of capital tied up into this asset class which I find dubious. However, where used as a hedge or portfolio leg; rapid unwind of the 'safety end' of a portfolio bodes poorly in genuine risk aversion. 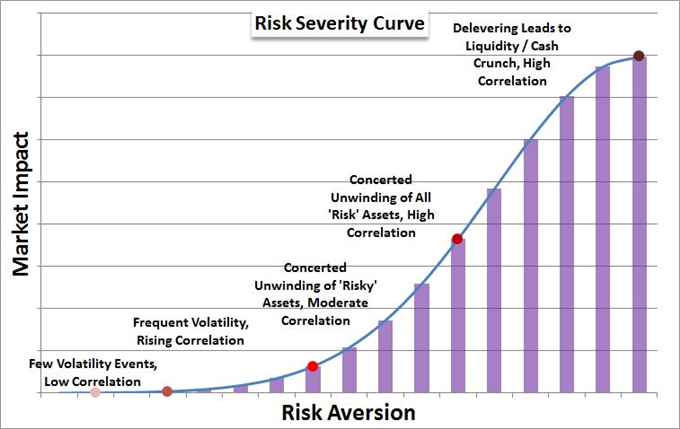 FX Will Take Up the Speculative Call

We have already seen a number of currencies align to their risk bearings over the past weeks. The Australian and New Zealand Dollars have both lost significant traction in the aftermath of their respective central bank decisions. Both the RBA and RBNZ have voiced a more dovish outlook which in turn further diminishes the speculative appeal of once-famed carry currencies. Add to that a general withdrawal from carry, and these underperformers are naturally the first to go. More reticent to rollover, the Yen crosses have finally slipped through the bullish leaning congestion of the past months. My focus will be on the EUR/JPY, GBP/JPY and AUD/JPY; but be wary of USD/JPY. The Dollar has been slow to pick up, but its haven status is unequaled when the question is absolute liquidity. If this concerted turn in speculative exposure continues, the Dollar is likely to drive EUR/USD back below 1.2175/35.

There are no doubt other fundamental threads running through the market; but when not superseded by risk, they are often distorted by the systemic fear. In the case of the Pound, the Bank of England's surprise hawkish outlook heartened bulls for a short while; but the concern of Brexit and the uncertainty it bears on the Sterling ultimately checked the market. The Swiss Franc continues to build its overlooked strength on pairs like EUR/CHF with a wide bid across the majors. Is this a return to traditional tendencies. Even the Chinese Yuan needs to be evaluated on this level. Either the market is pulling back from Chinese exposure for the risk it poses, or supranatural forces have turned USD/CNH on purpose amid questions of intent and stability. We discuss all of this and more in today's Trading Video.