Why You Should Be Concerned Over a Deeper Market Decline Ahead

Sign up for the live webinar coverage of the Bank of England's Super Thursday policy decision with Nick Cawley in the London session on the DailyFX Webinar Calendar page.

There has been a meaningful bounce following the tumble that started the week; but the disruption of the delicate balance of complacency likely represents a transition in market tolerance that will not easily be restored. The issues facing wide risk trends and top benchmarks are systemic, but there are also more digestible technical cues to follow. The S&P 500's rebound Tuesday didn't continue into Wednesday's session. Morning gains were frittered away into the New York sessions closing hours until the day closed with a modest loss. In the meantime, the day opened to a fifth gap lower and ended with the largest 'upper wick' - representing an unfavorable intraday reversal - since the August 2015 plunge. When we look again to broader market context, the past five days' range (9.1 percent of spot) was also unmatched until we reach that same plunge.

Risk Trends are More Troubled than Just VIX and US Equities

When markets falter, dazed investors often scramble for a reason. Even though an explanation of what tipped fear won't generally alter the troubled course, there is comfort in knowing why pain is being inflicted. Yet, too often, the source of the market pain is just ascribed for expediency and not the practicality of a true understanding. Through there is a complicated tangle of issues in the financial system after years of aggressive stimulus and zombie-like buildup in risk assets, one of the primary issues at hand is overexposure. Back in the Great Financial Crisis (GFC), the subprime housing market's implosion was a clear target for collapse in excessive leverage. In reality, that leverage was more systemic. To start this week, the pain in volatility products and implosion of inverse volatility ETNs threatens to be another spark - though there is debate as to the scale that this more modern financial product represents. That said, the risk again is the general saturation in risk. Not only is leverage at record levels for investors, government and consumers; but market participants have increasingly pushed capital towards riskier and riskier market types. And those exceptionally risky assets are offering returns that are at or close to historical lows. 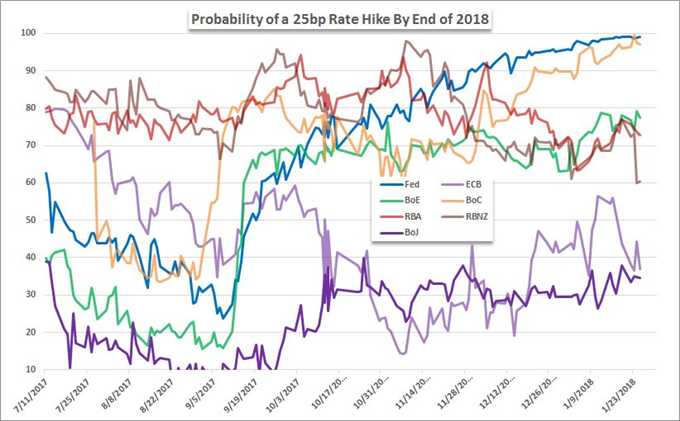 It may still be a long way from meaningfully making up the ground lost over the past 13 months, but the Dollar is finally marking a modest rebound. The DXY Dollar Index cleared 90 this past session after two weeks of consolidation. The fundamental backdrop was not particularly robust or even influential for the Greenback. Some Fed speak was the only thing that really registered. Across three of the central bankers (Evans, Dudley and Kaplan), the most remarkable statement was that jolts of volatility and modest market corrections were healthy which paired unfavorable with the suggestion that nothing would change for the planned rate tempo. What that did do however was draw a starker contrast to the recent struggles of the Dollar's primary counterparts - the Euro and Pound. These two currencies' strength was critical to the USD's slide the past year, so their retreat offers the same leverage but in the opposite direction. I am watching EUR/USD, GBP/USD, USD/CHF and NZD/USD closely.

Risk trends is certainly the top theme to monitor moving forward. Monetary policy, however, is proving another fundamental force that is starting to exert its influence in the FX market. Following the ECB and BoJ's dovish policy holds as well as the Fed carrying forward its hawkish course, the RBNZ this past session delivered a slightly more dovish outlook of its own. That resulted in a distinct Kiwi drop, but no pair was more remarkable for its technical progress on this development than NZD/USD as it positioned for a reversal to match its December turn. With this theme gaining traction, the BoE's 'Super Thursday' should be monitored closely. While there is a very low chance of a rate move at this gather, there is hearty speculation of one mid-year and an even higher probability of a hike by year's end. The Quarterly Inflation report will factor into that outlook. That said, it may be their famous Brexit concerns that ultimately decides this event's outcome. Finally, crude oil is making a technical move to finally catch up to fundamental concerns. A month of congestion has ended with a slide through 63 that bodes poorly for a commodity that seems to have come detached from its typical supply-demand balance. We discuss all of this and more in today's Trading Video.