US Indicies Lead a Sharp Decline

I have been waiting for the market's to make at least a modest move to show its admission that risk trends can sour, but didn't expect the intensity for that correction that we registered this past session. Nearly all assets with a risk sensitivity took a dive through Tuesday's trading session, but none were more remarkable than the benchmark US equity indicies. The S&P 500 which I focused in on the day before posted a high profile trend break. Given the intensity of the bull trend the past month, a break of the channel was overdue, but the resultant move posted the second largest bearish gap on the open in seven years and the 1.1 percent drop ended the longest period of quiet (114 trading days without a 1 percent or greater decline) since 1966. The Dow 30 was just as prominent with its largest gap down on the open since 2001. This could be a dramatic opening salvo to a long-overdue 'de-risking' or simply a pressure relief. Fundamental motivation will determine which category we will fall into. 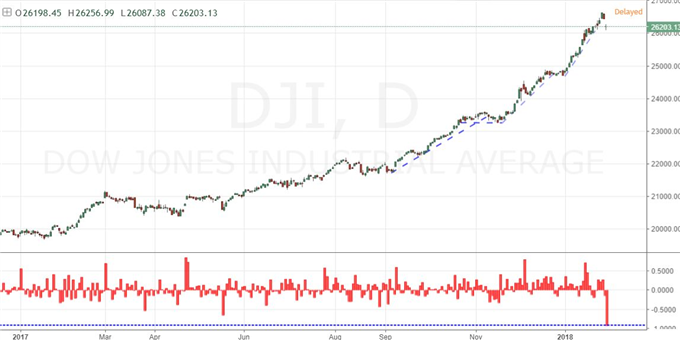 There is some heavy scheduled event risk that taps deep and critical themes over the coming 24 hours. Risk trends are an all-consuming theme when under power, but it is more often the powerful result of speculative frustration rather than a catalyst itself. We shouldn't write that off as a possibility however given the extent of exposure the markets have built up over the years and the frequent points of strain pointed out on a regular basis in financial news and trading circles. If we are instead looking for a discreet trigger, the State of the Union can provide a protectionism cue. Clearly, the 'America First' agenda brought to Davos last week was not met with enthusiasm in global sentiment. Doubling down could promote an 'us versus them' growth view that could translate into a collective loss of GDP and reduction in capital circulation. 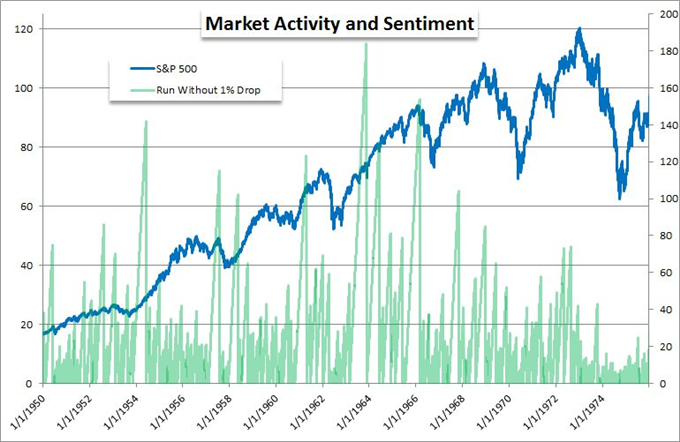 The FOMC and Other Events/Themes

The third theme that makes this a particularly dangerous time for Dollar volatility but may be difficult for risk assessment is the FOMC rate decision. Unlikely to end in a change in policy, the reality of normalizing policy encouraging the receding tide that shows how exposed to risk the average investor is is always a possibility. Outside the US's circle of influence, the Euro is looking increasingly stretched on its incredible 2017 run founded on a hawkish view that has not really materialized. Will the in-line Eurozone GDP reading (best since before the Great Financial Crisis) enough to earn its buoyancy? Brexit a motivation for Pound bulls draws equal dubiety. Is the outlook really that more encouraging? From the data listing, Aussie traders are watching the Australian CPI figure for the same possible reaction the Kiwi suffered to its own inflation last week - and perhaps a technical cue on similar AUD/USD and NZD/USD channels.

In all the mix of the competing fundamental themes, it is difficult to see what the Dollar and risk trends prioritize and how the outcomes are evaluated. Yet, for one asset, the implications can be rather straightforward for risk trends, trouble in global financial markets and undermining fiat: gold. The stakes are certainly higher than just a Dollar foil. Meanwhile, the cryptocurrency market's future is looking increasingly troubled. Its painful drop this past month has already shaken the core of the market as the interest in this asset class has largely been based on a speculative opportunism that thought it would only go up and provide a quicker return than the storied but paced S&P 500. How rude reality can be. Yet, as the weak-hand 'tourists' bail on the hopes of becoming overnight millionaires, we can actually see more permanent problems arise if the market itself is questioned for stability. That is a tangible threat with news that the CFTC has subpoenaed record from Bitfinex and Tether amid rumors there are accounting issues at play. Or, a threat to the future draw of fresh funds, Facebook announced it was banning crypocurrency and ICO ads - both new and established. We discuss the active market, its opportunities and risks in today's Trading Video. 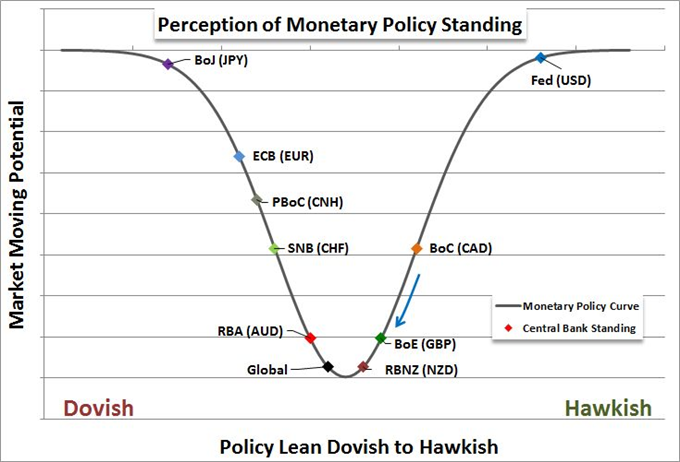 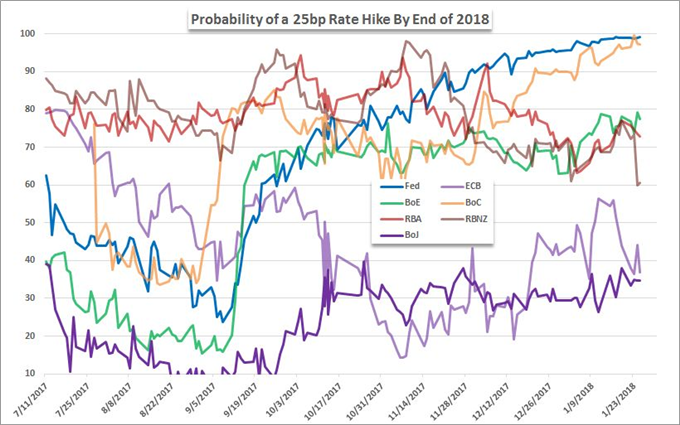