The benchmark, US equity indices are standing just off the record highs; but the drive behind 2018's impressive charge has clearly taken a break. From the S&P 500 to the Dow 30 to the Nasdaq Composite, the pace of the past two weeks has clearly tempered. In fact, for the S&P 500, the past two sessions' daily candles have fit comfortably within their preceding candles' range. That has created short-term consolidation which typically stirs speculators to anticipate breakouts. How will this pause resolve? Is it just a hesitation before the markets restore their conviction-less momentum to fresh record highs, or is this the end of the holiday reinvestment effort? Across other asset classes, we have seen little consistency to the intensity or even direction carved out by US stocks. What is particularly unusual is the continued swell in the VIX Volatility Index which typically moves inversely to the S&P 500. Yet, the 10-day correlation is not only positive - a rare enough occurrence - it is the fifth strongest alignment in the past two decades. One of these benchmarks will give, but which?

Looking to the fundamental backdrop for clues as to what has swayed markets to this point or may take up the cause moving forward, the Chinese 4Q GDP reading this past session was arguably the most prominent indicator listing on the economic docket for the week. The 6.9 percent growth through 2017 represents the first acceleration in annual growth in seven years. Yet, the remarkable proximity of this series and other economic data to expectations and previous readings reflects the skepticism that has built up around the statistics that have come out of China. The top event risk for general sentiment ahead can have a more pointed influence on markets - depending on the outcome. The threat of a US government shut down is not an unfamiliar concern for investors. Brinkmanship over government funding has arisen multiple times over the years. It is that frequency and the last-minute crisis aversion that has dulled investors' appreciation of the risks involved. If another last-minute resolution is found, the impact is likely to be minimal. Yet, the fallout from a shutdown in this excessively optimistic and credit-uncertain market can yield painful consequences.

Another remarkably stoic asset in the face of US financial upheaval, is the Dollar. There is every reason to see a more robust bear trend arise from the Greenback simply through the critical technical breakdown the currency suffered at the start of the week. Despite the DXY sliding through the 'neckline' of a three-year head-and-shoulders pattern and EUR/USD breaking above the mid-point of its historical range around 1.2200, neither has made any ambition for further progress. A government shutdown and ratings fallout can certainly change that. In commodities, US crude oil has started to level out with a conspicuous head-and-shoulders pattern on the four-hour chart as a result. Gold has already turned back from a wide range resistance, but follow through awaits the Dollar's leave. Even cryptocurrencies have attempted reversal. Bitcoin, Ethereum, Ripple and other popular coins are off their lows again; but a true recovery seems consistently elusive. Large 'lower wicks' will be a common sight even if the market continues to retreat as the speculative rank still has a considerable in-the-money percentage given the pace at which these markets rose over the past year. That said, a permanent shift to how this market trades has no doubt taken place. We discuss the trading environment into the final session of the week in today's Trading Video. 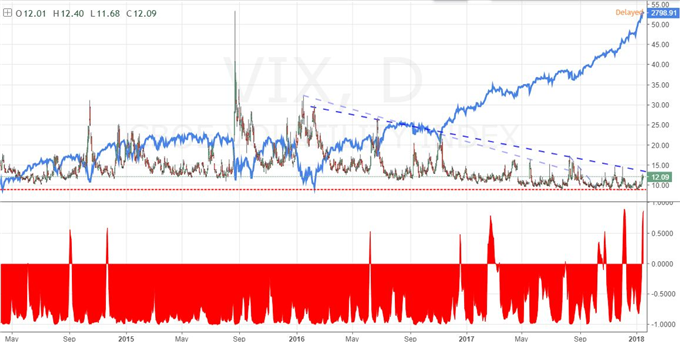 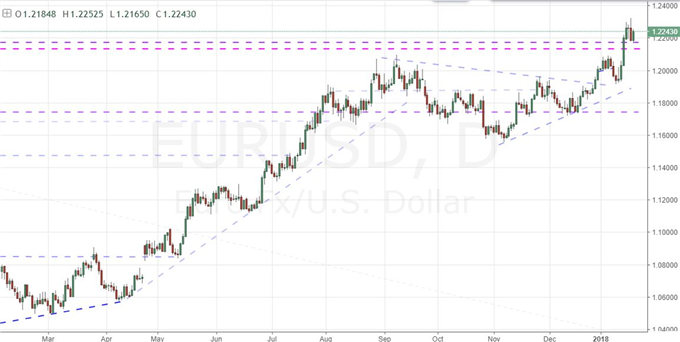