A lack of liquidity was not going to staunch the Dollar's bleeding. Monday opened to a US bank holiday - the Martin Luther King Jr. holiday - and risk trends were properly subdued in respect to the state of liquidity. Yet, the enthusiasm for unloading Greenback interest following last week's critical breaks continued with little abatement. From the ICE's DXY Dollar Index, that would translate into the critical break of a neckline on a very large head-and-shoulders pattern that had developed these past three years as well as the subduction of the midpoint to the 2008 to 2016 bull trend. That is far more impressive on a technical basis than just setting a three year low. It may have been the proximity of these market levels with so much weight that carried us through. The fundamental drive to start this week is just as thin as it was to get the Dollar up to the lines. Growth is still buoyant, interest rates expectations unsurpassed and political uncertainty in a lull; yet, the Greenback still slides.

Key to the currency's trouble is the strength of its counterparts. The EUR/USD's clearance of its 2014-2017 and historical range midpoints at 1.2175 and 1.2135 respectively last week led to a significant measure of follow through Monday. And yet, the milestone didn't seem to inspire anywhere near the same degree of enthusiasm for the rest of the Euro pairings. In fact, looking at the equally-weighted Euro index, it is still constrained by recent resistance and further sits well below a five-year range high. The same is true of GBP/USD. The pair costed beyond last week's 1.3600 break to post-Brexit highs to trade as high as 1.3820, but we saw little of that carry over to other Sterling crosses. Its own equally-portioned measure is similarly constrained by synthetic technicals without a string of ambitious moves higher. Further, the net speculative positioning keeps caution in play. The net interest in the anti-Dollar drive is already exceptional. We could also forge new records in net speculative futures interest (COT) or supplement with groups that are not technically-included like hedging or commercial interests; but this seems dubious given the Dollar's outlook is not in fact negative...yet.

From the COT update from last week, EUR/USD net long interest hit a fresh record high. GBP/USD positioning rose to its highest point since August 2014 before the underlying pair itself broke above 1.3600 - as the data is tallied through the preceding Tuesday. AUD/USD also put in for a remarkable speculative shift when the bearish outlook from futures trades was sharply reversed for the biggest swing towards net long that we've seen since May 2015. Looking over into commodities, both price action and positioning offer remarkable views. US-based WTI crude prices continue to rise with a sixth straight advance to match the longest run in a year while net speculative futures positioning nudged a fresh record high. The European-favored Brent however has yet to clear its multi-year high $70 mark reached last week. Gold is at the top end of a multi-year wedge/range. We have seen Dollar weakness lift gold to its resistance but clearing it will likely take something more fundamental. Finally, cryptocurrency like Bitcoin and Ripple are in different holding patterns awaiting South Korea's ruling on whether or not to ban the hot market. We discuss all of this and more in today's Trading Video. 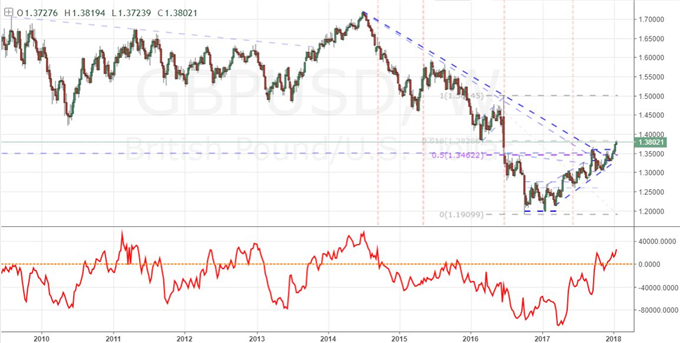 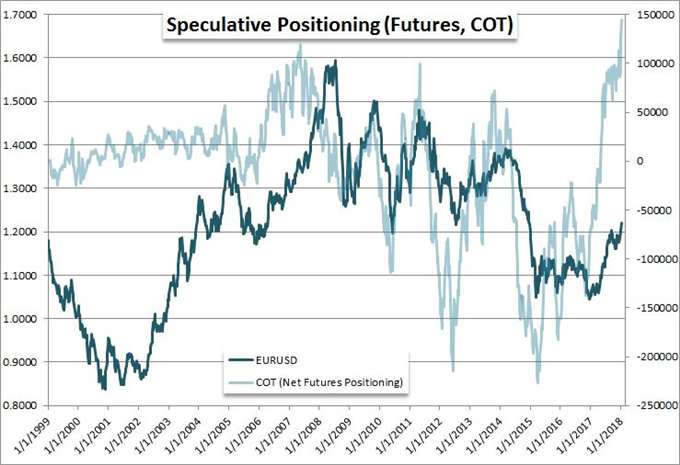