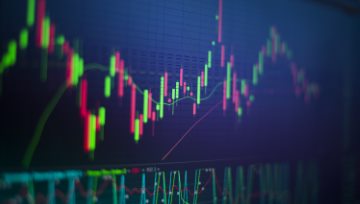 There is a wide array of impressive trends across the financial spectrum that I monitor, but the appropriateness of these otherwise technically-striking patterns should still be called into question. Still dominating the headlines is the sustained charge higher from the US equity indices. The S&P 500 followed up with Tuesday's slim move to record highs with a more prominent advance to secure a fresh record. What carries greater weight is the recognition that this time around, there was a wider appeal for risk-oriented assets. The tech-heavy Nasdaq forged its own charge higher to all-time-high status while the Dow proffered a more modest and stately advance to new heights. European shares climbed but from a disadvantaged recent trend like that from the DAX and FTSE 100 though the Nikkei 225 still seems to be off script. Emerging markets arguably still offer the greatest pace but there is enough depth to conviction that junk bonds (high yield fixed income) has finally jumped in line. This may be the reinvestment effort into the new year, but how strong will it be when complacency is more characteristic than outright bullishness and when political risks seem to be creeping back into the market.

Extending a rich trend is difficult enough, but what about attempting a reversal? With Wednesday's session, the Dollar finally managed a bullish close. For the DXY Dollar Index that broke a five-day losing streak which matched the longest slide in nearly two years. Yet, when we look at a less EUR/USD-intensive cross (which the DXY is heavily weighted towards); we find an equal-weighted synthetic read on the Dollar has registered its first advance in 11 trading days - bringing to end a tumble that matches the worst run for the Greenback since the Euro began trading. There is a modest fundamental wind for bulls to point to in the FOMC minutes which suggested the recent tax reform had inspired policy officials to raise their growth forecasts - though inflation concerns remain and the market's rate forecasts is still far from the Fed's own projections. Coming up we have the ADP payrolls and Friday's NFPs, but labor data hasn't proven too successful at altering interest rate views or the Dollar's bearing over the past months; so it would be unreasonable to place more emphasis on it now. That said, there is a measure of natural market rebalance that could play in the USD's favor. While not motivated to a strong trend or correction, a motivation to move back into range along technical lines could be more feasible. For that reason, I'm watching the likes of EUR/USD and AUD/USD which follow more than just a statically run.

Statistics like consecutive day moves are not strong motivation in and of themselves. We may break the spell but that doesn't necessarily mean you derive a worthwhile trend from the counter-trend move. The Dollar's 10-day tumble, AUD/USD's mammoth 12 day run and gold's 8-day charge are impressive; but we shouldn't let our contrarian appetites get ahead of our need for conviction. I will be watching Aussie-based crosses like the Dollar-based major and AUD/JPY but there is limited event risk that can be reasonably expected to take the lead. Gold's pullback was overdue and comes nearer to a larger range which may give it more speculative attention. Meanwhile, technically-motivated and fundamentally disconnected moves should still draw greater scrutiny. Oil has charged up towards $62 disregarding supply-demand interest and now faces the 61.8 percent Fib level of a more than 35-year range for the commodity. Cryptocurrencies meanwhile truly personify the speculative ambition. Bitcoin and Litecoin are now struggling while Ethereum and Ripple cater to the drive to find where others are flooding their money - not necessarily committing for long-term adoption. We cover all of this and more in today's Trading Video. 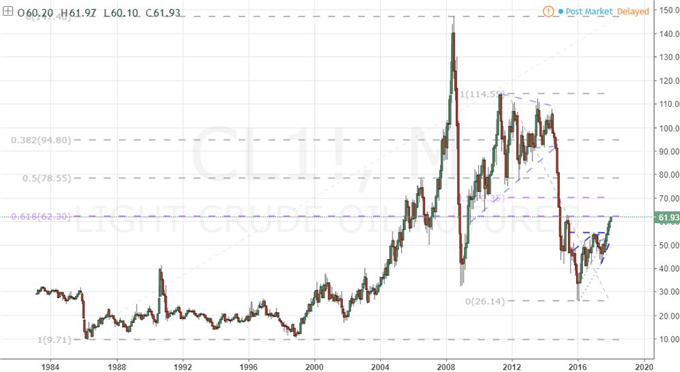 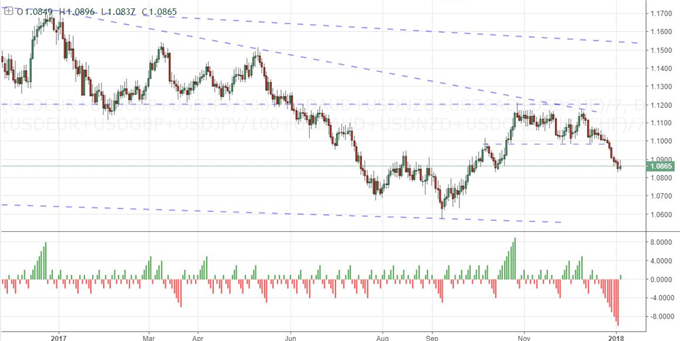 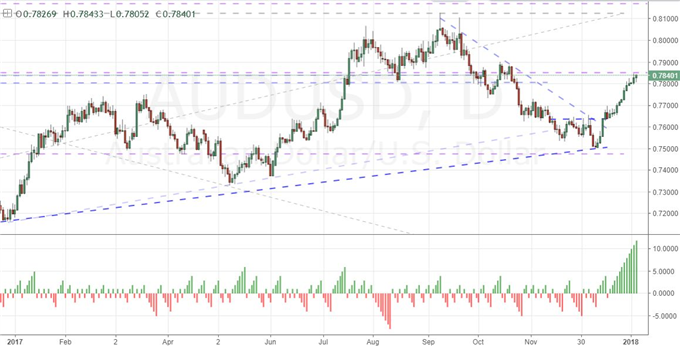