SPX Traders 'Bought the Rumor' on Tax Bill, Now What?

Liquidity, liquidity, liquidity. There are great technical patterns to be found in the markets along with influential themes and high profile event risk on the fundamental side. Yet, all of it can be quickly defused if there is not enough of a market to translate potential into action. That was the case with the headlines this past session. News that the US Senate and House had passed the sweeping tax reform that it had been pushing since the campaign leading into the 2016 election represented the milestone that the markets had been anticipated for over a year. Arguably, this program was one of the key contributions to 2017's remarkably climb - adding nearly 20 percent to the S&P 500 since January 1 - after the tailwind from accommodative monetary policy had fully died down. Despite the anticipation this event carried however, the market showed almost no response to its outcome. Aside from bullish gaps on the open for the major indices, the markets closed down on the day. Not exactly what we would expect if we were to go by the standard model of economics-market response.

Of course, we have discussed the shortcoming this inevitable policy adoption would face. We have anticipated the tax program passing the Legislative and Executive branch for some time. In fact, the market has priced in much more than just the tax reform. The vows for an infrastructure program to further investment and growth have leveraged the speculative anticipation. There was certainly a 'buy the rumor' effort in place, but we should not necessarily expect this to play out along the lines of the traditional adage - completing with a 'sell the news' reversal. Liquidity is draining quickly for the holiday, and forging a true turn in such a prolific trend would be very difficult to accomplish in such shallow conditions. Further, there is the open thread of whether the US government will quickly tackle and enact the financial stimulus effort. A short-term reckoning may still be on the horizon with so much recent build up, but a deep and thorough deleveraging is unlikely through the remainder of 2017. In the meantime, the Dollar has not enjoyed the enthusiasm in the lead up; so responding now was never meant to be. Instead, the reality that the credit rating agencies will now deliberate on their confidence in US sovereign debt reaches a new stage where serious pain in downgrades may come in the foreseeable future.

In other areas of the market, we find liquidity still proving the dominant element of market activity. The Sterling offered limited response to the IMF's downgrade of the UK economic outlook amid Brexit uncertainty. The GBP/USD range stands and reversals for the likes of GBP/NZD are still lacking conviction. The New Zealand 3Q GDP report early Thursday came with a clear positive outcome, but the impact for the Kiwi was mute. NZD/USD, NZD/JPY and EUR/NZD are all remarkable for their technical shape; but expecting anything significant from them in these conditions is asking for too much. The same is true for crude oil which has worked itself back into one of its familiar, extended wedge patterns. A break will come, but momentum will likely fail to show up yet again. Perhaps the only place to expect anything close to 'normal' market movement through the end of the week is Bitcoin. The main cryptocurrency continued its drop this past session despite the corner turned towards legitimacy with the CME and CBOE now trading futures. Speculators may not be fully giving up on cryptocurrencies however. A short-term chart comparing Bitcoin to Bitcoin Cash suggests traders are still seeking out the appeal of this emergent markets just not in a headline stealing leader that has problems with timely and affordable clearing. We discuss what the market environment looks like through the end of the week in today's Trading Video. 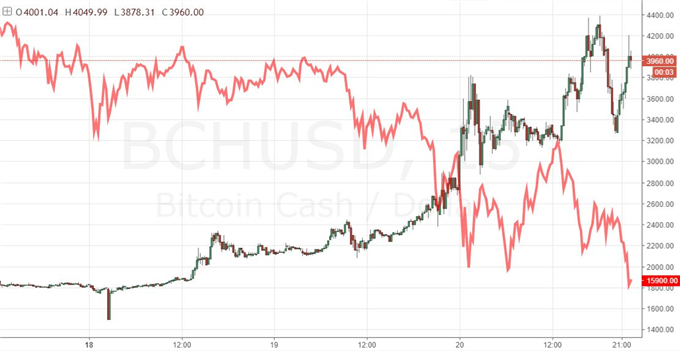 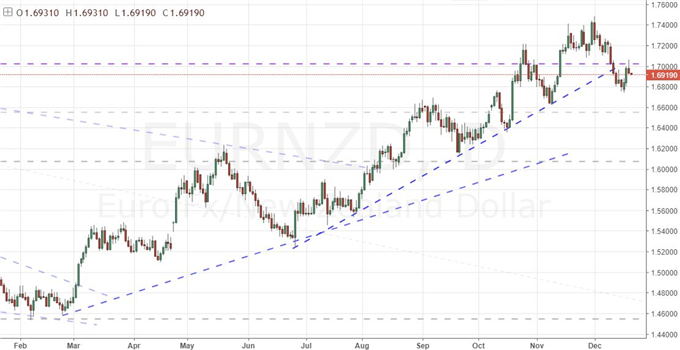 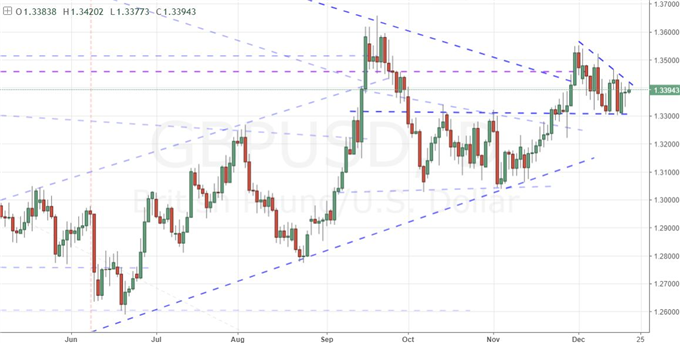 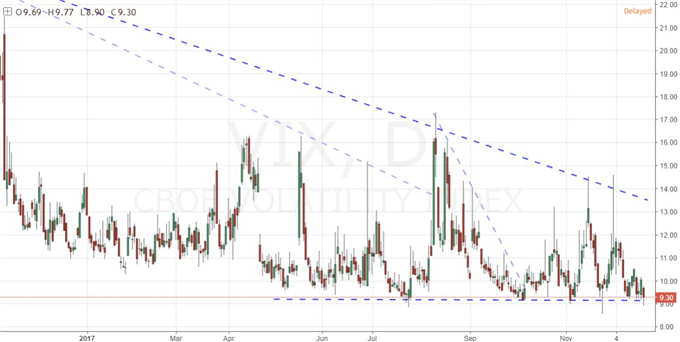