We are counting down the days to the Christmas and year-end liquidity drain with the dial on volume and open interest notching down with each session. While there are some particularly precarious technical standings for the likes of US equity indices, the general activity and commitment levels we are seeing in the market reflect our conditions accurately. The past session, the major US indices uniformly edged back from their respective record highs with some interesting patterns resulting - like the S&P 500's bearish engulfing candle following Monday's gap higher with limited follow through (an 'island'). Under normal conditions, the technician in me would consider this a loaded shift in momentum; but my practical side reminds me that there likely isn't enough depth to make much of this shift. Conditions are so distorting that the top headlines for the day - including the initial reports that the tax reform bill had passed the House - didn't event register as meaningful motivation.

If were to evaluate the political headlines in the the most simplified and speculative manner possible, news that the House of Representatives had progressed the most business-friendly tax cuts in decades should have lifted the benchmarks for speculation. Yet, that was not the case. Even before we take into consideration the news latter in the day that the House would have to vote on the bill again due to changes made by the Senate, US markets were already sliding. What benefit this program looks to confer on the US business sector and on to the economy has already been accounted for to a large measure in the past 13 months of climb. We have seen more than a 25 percent advance from the S&P 500 since the US Presidential election which came with eager anticipation of the principal economic policy promises made during Donald Trump's campaign: regulation rollback, tax reform and infrastructure spending. The strong run since then reflects a considerable amount of the value from these endeavors - but how much is not clear. We are in the midst of a 'buy the rumor, sell the news' evaluation by the market; but that turning point in speculative appetites is not as black and white as a simple vote in Congress.

Where equities markets wrestle with how much economic strength there is to price in from these collective political efforts as they mark progress and setback, the Dollar has more readily reacted to the difficulties that will come alongside the policy. All programs have a cost, and these certainly are no exception. The total GDP they add will be debated over for a long time, but the impact on the deficit draws little discourse. The tax plan will raise the United States' debt levels and the infrastructure effort will only further that climb. For the Dollar, that will mean the additional credit risk could pose a clear threat to its absolute reserve status. Meanwhile, this seems to be so concerning, that the rise in rate expectations is generating little-to-no enthusiasm. The implied yield through the end of 2018 derived from Fed Fund futures rose to its highest level since October 2008 this past session, but the Dollar paid the buoyancy no mind.

Meanwhile, the mere reflection on the end of QE and confidence of wage growth by a well-known hawk at the ECB (Weidmann) seemed to cater to the hawkish Euro gilt. The shared currency advanced against nearly all its major counterparts this past session. In contrast, the RBA meeting minutes proved consistent with a bearish bent to a neutral stance, but the Australian Dollar offered virtually no response. An equally-weighted AUD index posted its fourth smallest range in three years and key technical standings for pairs (AUD/USD, EUR/AUD, AUD/CAD) were undetonated. We will see if the NZ GDP figure due tomorrow will register any greater impact on the Kiwi - to do so, it will likely need to facilitate a greater influence over RBNZ expectations. We take stock of what is moving our markets - and what, surprisingly, is not - in today's Trading Video. 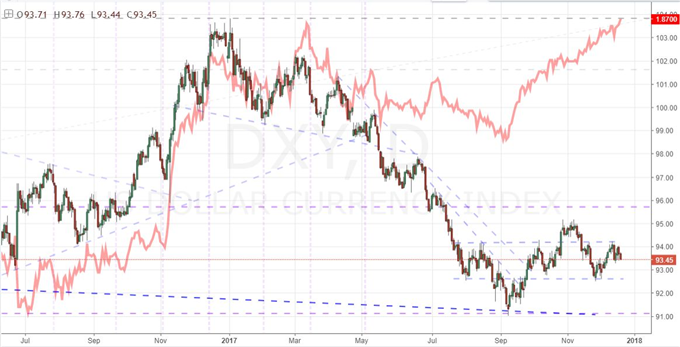 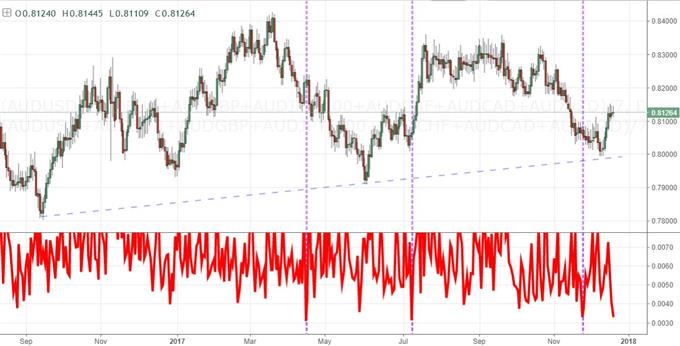 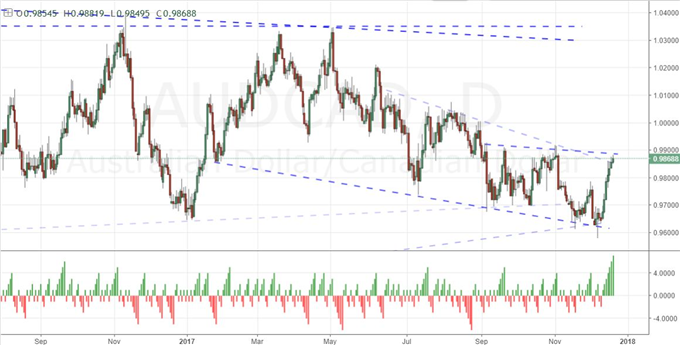