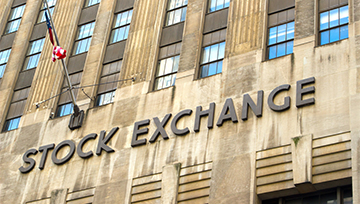 The Dollar stabilizes after its hawkish Fed hike drop, while the Euro and Pound process modest improvements in their respective central banks' forecasts. What will generate volatility first: monetary policy or excessive complacency?

Monetary policy continued to draw the attention of market participants. Yet, the European Central Bank's and Bank of England's policy decisions generated the same level of impact as the lackluster Fed rate decision the day before. For the Greenback in fact, Wednesday's tumble - despite the FOMC hike and adamant projection for another three moves in 2018 - had stalled and reversed course. It is not difficult to underwhelm the market with a rate hike in a world of dovish policy agendas when the move is fully anticipated well in advance. We went into the meeting with Fed Fund futures pricing in a 100 percent probability of that hike. What's more, it came with a 7-day climb - the longest run in over a year. So, merely meeting expectations is a good opportunity to book profit on confirmation. Yet, that outcome is not necessarily a bearish one. A new, full-tilt bear trend is not going to arise from the Fed hike unless something else of equal sway and considerably more surprise takes up the call for continuation.

Against the backdrop of the Dollar's confusing course following its central bank update, the other monetary policy motivated moves this past 24 hours were easier to absorb. The Swiss National Bank (SNB) rate decision was a write off, but the ECB's hold on both its benchmark and QE pace drew out speculation. In the policy statement and presser, we saw an upgraded growth and inflation outlook which lay the groundwork for the eventual normalization turn. From the BoE, caution prevailed; but the group downgraded its Brexit concern and a reference to 'gradual hikes' in the future was treated like admission that hikes are on the horizon. These outcome don't carry enough weight to produce key technical breaks for EUR/USD, GBP/USD, EUR/GBP or the other major Euro and Sterling crosses; but it will adjust the dial for the medium-term. In terms of sheer scale, the moves from the Canadian, Australian and New Zealand Dollars recently have been far larger; but their long-term potential is more dubious. BoC Governor Poloz made remarks to the effect of 'don't doubt future rate hikes' while the Aussie jobs figures added an economic twist to rate forecasts for lift. Meanwhile, the news earlier in the week of the new RBNZ Governor for 2018 tempered with the Kiwi easing off its breakout run.

Short-term volatility is the more practical gear for the markets at this point between mixed fundamentals, extended exposure and seasonal expectations. However, we shouldn't tune out the possibility of the dramatic and devastating. Looking back to the sky-scraping climbs from US equities, the S&P 500 offers another extreme tally in addition to its all-time highs and the derived VIX's attachment to 10. It has now been 84 trading days since the benchmark index has registered even a 1 percent decline. That is beyond worrying. While we had a longer series through March, looking back over the past 3 decades there are few other examples of this stretch of complacency. In truly robust markets, strength is established in liquidity and regular bouts of profit taking that would not touch off a disorderly flight from stretched assets. If we were to see even a modest correction now, there would likely be considerable anxiety that the drop could turn into an epidemic. And, given our position between systemic complacency and expectations for seasonal volume; such a development now could prove disastrous. We take stock of the market and its trading opportunities, in today's Trading Video. 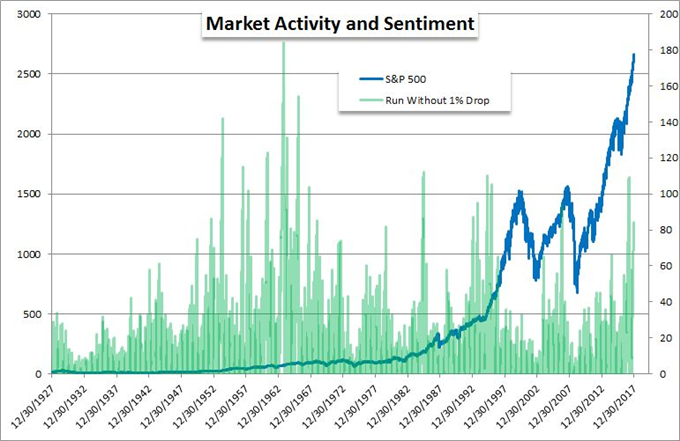 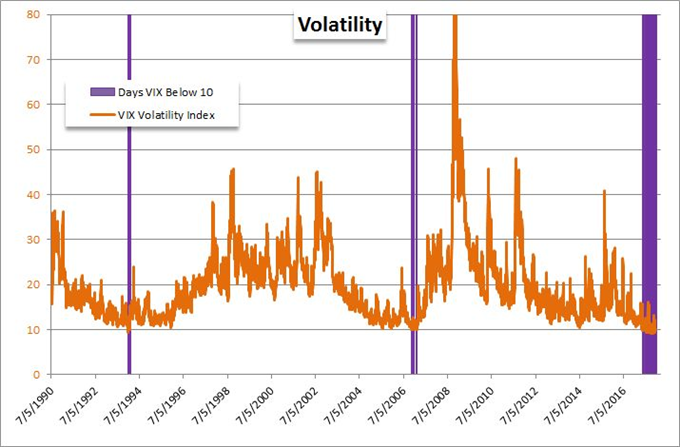 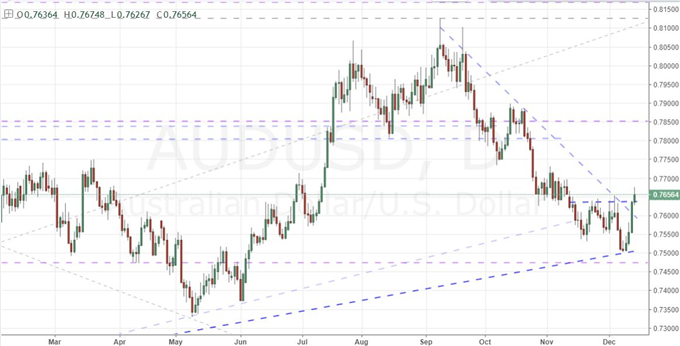