Dollar Eases Despite Hawkish Fed Hike, What About the ECB and BoE?

The Dollar's 7-day advance ended on the day the Federal Reserve announced a heavily-anticipated 25 basis point rate hike. Unexpected Aussie and Kiwi Dollar moves along with the ECB and BoE rate decisions ahead will fill in where the Greenback fell short.

Will you watch and trade this week's Fed, ECB and BoE rate decisions? Do you have market, trading or strategy questions you want answered? See what live webinars we have scheduled on the DailyFX Webinar Calendar.

Fundamentals are not one dimensional. If they were, there would be little opportunity in analyzing them to find undervalued or unappreciated trade opportunities. An appreciation of the context that we need to evaluate markets and events in was put to the test this past session when the Federal Reserve announced that it had raised the benchmark lending rate range 25 basis points while also maintaining a forecast for three more hikes through the coming year on the basis of encouraging economic projections. That is undeniably a hawkish outcome. It is particularly robust given the contrast it draws to central banks like the European Central Bank (ECB) and Bank of Japan (BoJ) which are maintaining zero or negative rates along with large stimulus efforts. Yet, while the contrast is clear between the Dollar and Euro or Yen, that does not translate into necessary market movement. We have seen the Dollar solidify its advantage for monetary policy over years, and this particular rate decision drew a 100 percent expectation according to Fed Funds futures. It was an outcome that was fully priced.

If we take the rate hike out of the equation, what did we get. The Fed pushed against the market's skepticism over an extension of the same pace of hikes out to 2018 and beyond. They maintained a median forecast for rates to rise another three times (75 basis points) in 2018 with the forecast for 2019 hikes holding steady and tacking on a further hike projected in 2020. That does reinforce the Greenback's advantage, but what does that advantage amount to? A slow pace of increase on returns from still-extremely low yields. We have some time ago transferred from a market that pines after any and all hope for yield to one that looks to explicitly take advantage of capital gains ('buy low, sell high'). It would be far more market moving if rate forecasts for the Euro, Pound, Aussie, Kiwi or any other host of dovish or neutral groups were to change.

And, that may be exactly what is happening for the Australian and New Zealand Dollar. Both currencies have been on a tear over the past few days. The RBNZ announced its next leader (Orr) and the market set out to speculation on his hawkish lean. The inverse head-and-shoulders break from NZD/USD is just one of the Kiwi pairs that has marked impressive technical opportunity - also on my radar are NZD/CAD, GBP/NZD, EUR/NZD and NZD/JPY. We haven't had the same explicit foothold for the RBA, but the recognition of their similar circumstances should have us pay attention to AUD/USD, AUD/CAD, EUR/AUD and AUD/JPY.

In more measured fundamental terms, the docket over the next 24 hours is dense. There are plenty of indicators capable of generating control bursts of volatility (US PMIs, Aussie employment, etc); but the thematic is where we can expect more serious development. There are three major central banks on tap for updates: SNB, ECB and BoE in that order. I will only offer the Swiss bank a glance just in case they lash out. More noteworthy are the other two European groups' decisions. The ECB is unlikely to change its policy standing or event give us definitive timing for the future, but the market has for some reason priced in a 20 percent probability of a hike. Far more interesting is the fundamental implications for the Pound. The BoE will have to answer for inflation above its upper target bound, but they are unlikely to budge. That said, the EU Summit's discussion of the Brexit terms will more likely strike a real nerve. We discuss all of this and more in today's trading video. 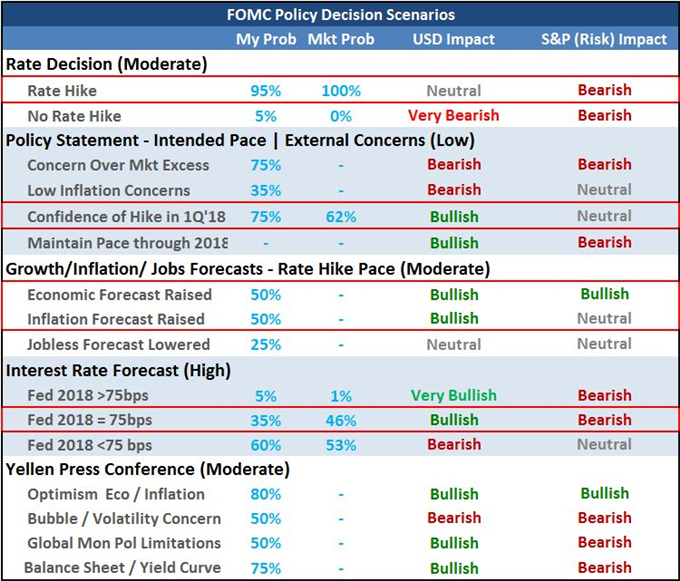 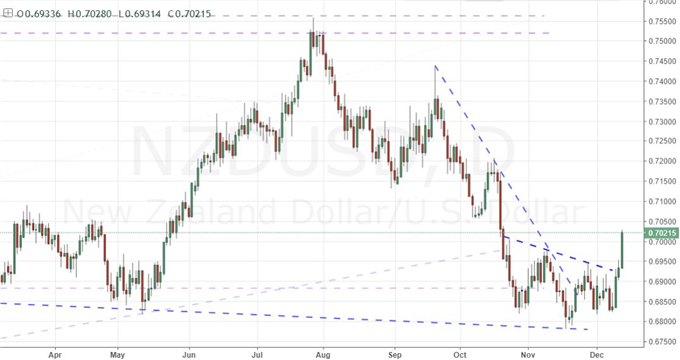 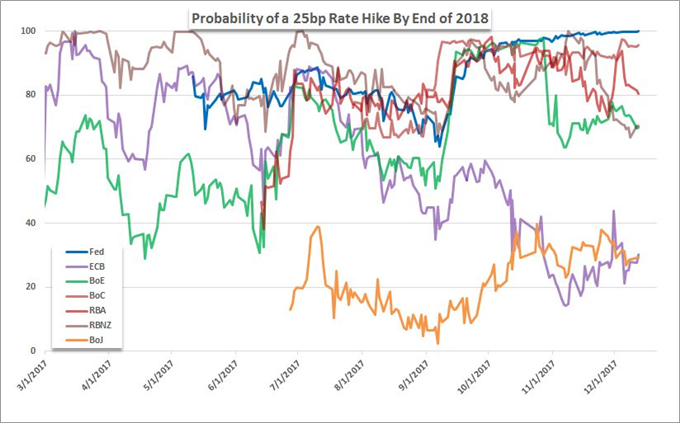