Volatility is starting undermine sentiment based on complacency. Exceptional activity in the broader markets this past session saw a Nasdaq 100 tumble and dramatic Bitcoin swings. And yet, meaningful news for the Dollar, Euro and other markets rendered limited response.

Risk trends have been generally uneven over the past weeks and months. While that has not translated into a full scale divergence where certain assets soar and others tumble, the lack of consistency is drawing greater and greater attention among the speculative rank who are already wearing their skepticism on their sleeve - even if they are not ready to reduce their exposure. Even the most invested and unflinching risk bull will have to question how far to 'push the trade' when we have such distinct signals like the Nasdaq's divergence, the ECB's financial stability warning and Bitcoin's manic-to-mania swing. This past session alone was a remarkable statement as to our current condition. There was a distinctly mixed performance in global equities with some rising like the Dow Jones Industrial Average, some meandering as with the S&P 500 and then the absolute session losers like the Nasdaq 100 dropping 1.7 percent. Looking further out to Chinese assets, broader emerging markets, junk bonds and carry trade; we see the familiar picture of disparity that we've been tracking for some time.

While the evidence of a slowly eroding foundation to speculative ambition has been evident for months, the general sense of complacency amongst participants has led the rank and file to choke down concern to take advantage of the distortion. Yet, it is truly concerning when the charge of the sentiment to this point starts to signal outright unease. Few would argue that the central banks have at the very least contributed to excess speculative optimism and at worst driven it to unstable extremes. It has been the accepted boiler plate by the major authorities to play down concern and find reason to be optimistic that current levels - no matter how high - are stable and appropriate. That is what we heard from the RBNZ and BoC yesterday, that was what Janet Yellen said this past session and what we've heard in any official capacity for months. That is why it is so shocking that the ECB's semiannual financial stability report took such a clearly disparate tone. Arguably the most aggressive central banks for its accommodative monetary policy, the European authority's report voiced direct concern that global markets were at risk of sudden shocks. When the cheerleaders start to call out problems, it is important to take notice.

In the FX market, there was notable restraint to a remarkably active newswire and economic docket. The Dollar's rebound this week slowed markedly despite the tax reform winds still at the currency's back and given consistent policy views from outgoing-Fed Chair Janet Yellen on the need for gradual monetary policy tightening. Perhaps the upcoming PCE deflator - the Fed's favored inflation measure - will offer a more definitive view on the monetary policy speculation which in turn motivates the currency. From the Euro, the warnings from the ECB over global risks didn't hurt the shared currency as the local assessment of the economy was rather encouraging. Here too, the upcoming Eurozone CPI and jobless rate data may lead to more distinct views on the monetary policy course. One of the most productive currencies was the Pound - despite a general lack of new developments. The previous day's news that the UK and EU were in agreement on the Brexit bill to help progress the negotiation. There are remarkable technical breakouts from GBP/USD, GBP/AUD and GBP/JPY; but you should be very confident on the subsequent Sterling trend if you intend to pursue these moves.

Without doubt, the most dramatic move across the financial markets this past session was once again from Bitcoin. The cryptocurrency made the momentous break above the $10,000 mark early Wednesday and the speculative rush usually associated to media and speculative frenzy translated into an incredible run to $11,400 and then a collapse back to $9,250. That is a near 20 percent swing in the span of less than a day. This is what we would expect from such a speculatively-centered market, but it is also what disqualifies it as a true currency and safe haven - at least for the time being. We discuss the remarkable and productive moves in the markets in today's Trading Video. 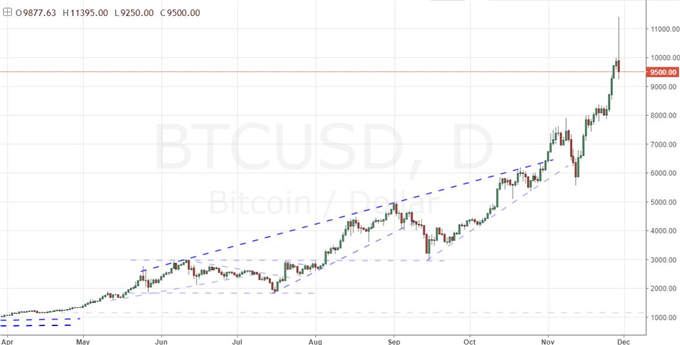 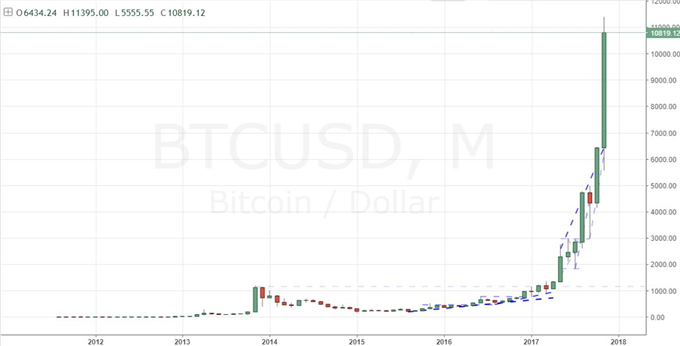